Spiders have featured prominently in Horror films since 1953’s Mesa of Lost Women. However, 1990’s Arachnophobia aimed to spice things up a bit, throwing in a pinch of dark comedy into the mix with the help from pitches like “Eight legs, two fangs, and an attitude.” The first release by Walt Disney Studios’ Hollywood Pictures and the first film directed by Frank Marshall (Alive 1993, Congo 1995), Arachnophobia was produced by his wife, Kathleen Kennedy (E.T. The Extraterrestrial 1982, Star Wars: The Force Awakens 2015) and Richard Vane (Harry and the Hendersons 1987, Dennis the Menace 1993) from a screenplay by Don Jakoby (Blue Thunder 1983, Death Wish 3 1985) and Al Williams, Arachnophobia continues to be one of those “Eeew, I won’t watch, but you do” movies on it’s 25th anniversary, July 10th.

When a new species of spider (actually a Peruvian Bird-eating Tarantula) from an Amazon Rainforest escapes a laboratory camp to the US and breeds, Dr. Ross Jennings (Jeff Daniels: Dumb and Dumber 1994, Looper 2012), his wife, Molly (Harley Jane Kozak: The House on Sorority Row 1983, Necessary Roughness 1991), and kids; Shelley (Marlene Katz: Sisters series, Rock Obama: The Barack Obama Musical 2008) and Tommy (Garette Ratliff Henson: Radioactive Dreams 1985, Return to the Blue Lagoon 1991) are quickly outnumbered, and the entire town is besieged. John Goodman (Rosanne series, The Big Lebowski 1998) co-stars as Delbert McClintock with a cameo by Kathy Kinney, who gained fame in The Drew Carey Show as Mimi.

From the onset of the film, the rainforest setting gives the viewer a real claustrophobic feel that carries throughout, whether spiders are under covers, in a casket with a body, or in the Jennings’ attic with camera angles that contain frequent close-ups in semi-lit spaces; just enough to see light glint off spider eyes. Although entertaining, the main characters are cliched to the critter Horror genre by today’s standards with the doctor, who knows about the spiders, knows he needs to get rid of them, but winds up hampering said ridding for possible fame. Then, we have the unsuspecting family with prerequisite arachnophobic family member (in this case, the dad) that initially finds the spiders and realizes what is going on before anybody, so they are tasked with saving everybody’s butts. Being this was Disney’s first foray in Horror, per se, they wanted to lighten the blow, so all the characters are obviously meant for quirky, comedic relief. All the other characters fall into line…behind the spiders, which are clearly the stars. Even cliched, the acting was well done with a good Horror/Comedy balance in this well-paced film. Adding to the quirkiness of Arachnophobia is the soundtrack with music by Trevor Jones (Last of the Mohicans 1992), Tony Bennett, or Jimmy Buffett, depending on whether the viewer’s watching in the US or Europe.

Arachnophobia was destined to be a cult favorite as people have been fearful and intrigued by spiders. The same was for the crows in Alfred Hitchcock’s The Birds (1963), which Marshall fashioned his Arachnophobia after. Interestingly, three hundred seventy-four harmless New Zealand Delena Avondale spiders from Los Angeles’ Reptile Rentals, handled by famed spider wrangler Steven R. Kutcher, were used because of their intimidating size and their pack-like lifestyle, which proved too much for some would-be stars and made the filming actors and actresses jittery. Kutcher used hot and cold blowing hairdryers to direct the spiders where to go on set, and while spiders were killed in the movie, none were actually killed. Stepping on mustard packs and potato chips were the sound bits to get that eeew factor. However, for the General and Queen spiders, Michael Wick (Naked Lunch 1991, Jade 1995) and crew created movable models. Regardless of the perceived gore, spider or human, Arachnophobia paled in comparison to that season’s fare, which included Total Recall, which actually made the news that year for its gore and violence, and Robocop 2. 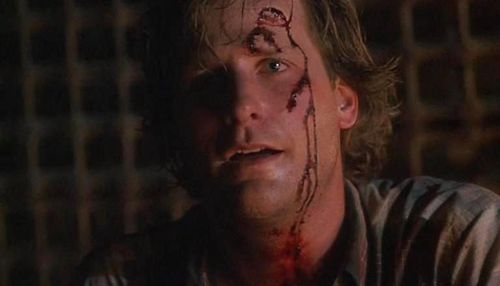 With all that said, the film was given positive reviews by the likes of Leonard Maltin and Roger Ebert while Rotten Tomatoes has a 91% Fresh rating for Arachnophobia. Even then, spider enthusiasts panned the film, saying it painted spiders in a bad light. Still, Arachnophobia earned $53.2 million on a $32 million budget in no small part owed to Marshall’s direction of the eight-legged stars, given that he had experience with them as well as rats while working on the Indiana Jones franchise. Thus, earning Saturn Awards for Best Film and Best Actor for Jeff Daniels. As a tie-in to the times, the spider-infested episode, “A, My Name is Alex,” of the TV show, Family Ties, which co-starred Brian McNamara, who played the assistant to the species founding doctor, played on a TV set. A novel as well as a video game was even released in 1991 for all major computer brands of the time. Reportedly, the house used for the Jennings has become known as “the old Daniels place” since Jeff Daniels played the patriarch, and, as mentioned before, Arachnophobia remains that “Eew, I won’t watch, but you do” movie. Not bad for a quirky 25-year-old movie about killer spiders. 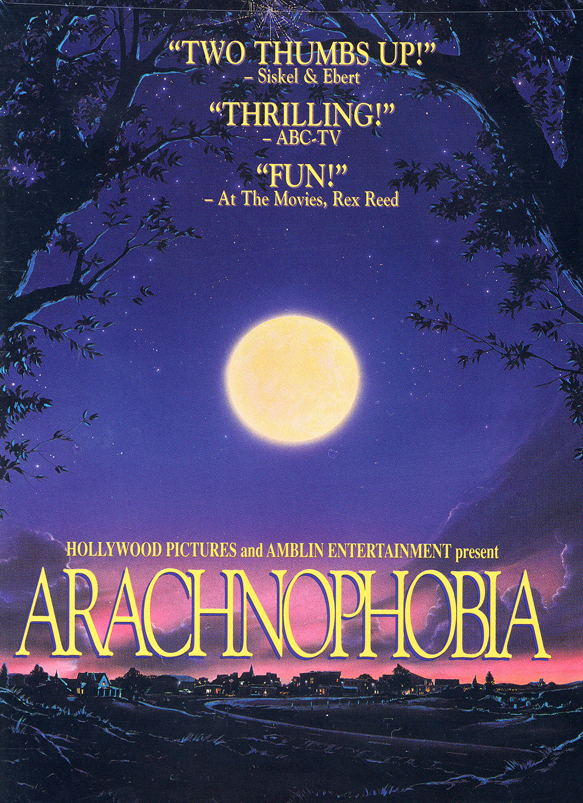 Purchase Arachnophobia on Blu-ray/DVD on Amazon