Ash vs Evil Dead – A Talk With Jill Marie Jones

The first season of the STARZ original series, Ash vs. Evil Dead, proved to be a strong addition to the Evil Dead universe. Bruce Campbell returned as the Deadite fighting, chainsaw wielding Ashley J. Williams, picking up almost three decades after the events of  Evil Dead 2: Dead by Dawn (1987). While trying to live his life as a simple retail employee, he inadvertently released hell on Earth with the Necronomicon. Abandoning his loner mentality, Ash is joined by Pablo Bolivar (Ray Santiago) and Kelly Maxwell (Dana DeLorenzo), as well as police officer Amanda Fisher (Jill Marie Jones) towards the end of the season. All three actors gained quite a bit of attention due to their strong performances.

The final episodes of the season, entitled The Dark One, found Ash and crew back at the old cabin in the woods, determined to finish what has been started. With Pablo and Kelly still in route, Ash and Amanda search for a way to pry open the chained cellar door. Ash unwisely leaves Amanda in the cabin while he heads to the work shed, not wanting her to see what was left of his old girlfriend, Linda. He explains, “She got possessed, I cut her head off with a shovel, then she did this crazy dance in the moonlight. I put her head in a vise, and I cut it with a chainsaw. She did have a rockin’ bod though.” 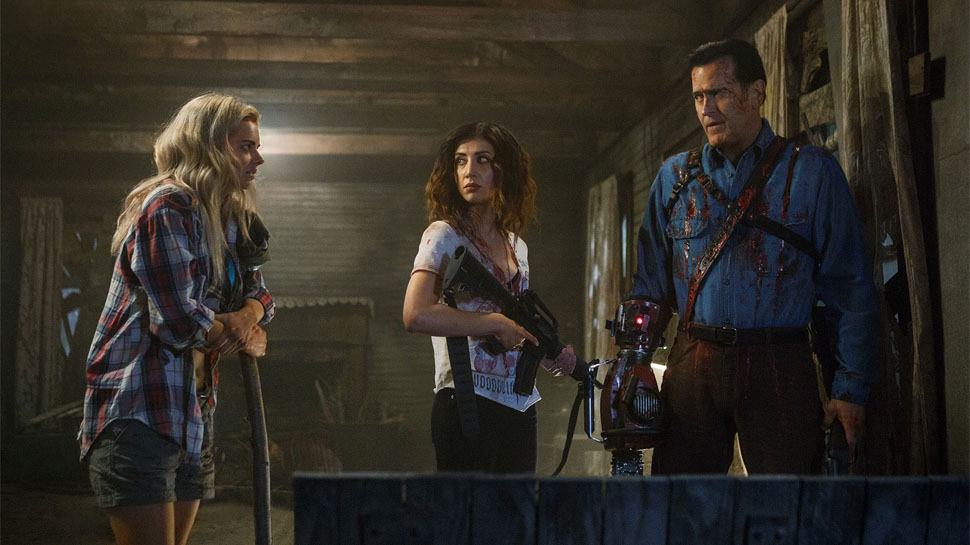 Still from Ash vs Evil Dead – The Dark One

Little does Ash know, his severed hand is also in the cabin and has sprouted a new Evil Ash, who passes himself off as the real Ash to Amanda. As they begin talking, he tells her, “I’m not anybody’s idea of a catch. I work in a trailer trash discount store. I’ve got a book that summons evil spirits, but before all that happened, I had a future and it didn’t involve chainsaws and shotguns and demons, and I want to see if I could find that guy again. You think you could help me?” Following the speech, the two kiss. She finally realizes that his hand has mysteriously grown back and it becomes clear that she is not dealing with the real Ash. Although she manages to get a cleaver and hack the possessed hand off, Evil Ash uses the other hand to bury the cleaver in her neck. She stumbles and impales herself on deer antlers, reminiscent of her partner’s death in episode one. Meanwhile, the real Ash is under attack from flying saw blades and a steel trap, which takes off his new steel hand. During the commotion, he is taunted by Linda’s severed head, still in the vice where he left it decades ago. He finally smashes her head and kicks his way out of the shed, only to find a bloody and dying Amanda in the cabin. He assures her that she is going to a better place just before she passes.

The two Ashes battle it out, both knowing each others weaknesses. Pablo and Kelly enter the scene and must decide which Ash to kill. They both have knowledge about Kelly and Pablo, but when the real Ash says to shoot both of them because “The other guy is dead and I don’t have to deal with any of this shit anymore,” Kelly knows which to kill. She explains, “The only person you’re willing to lay down and die for is you,” and Ash responds, “Well, that’s because I’m very important to me.” As he fires up the chainsaw to dismember the bodies, Kelly and Pablo go outside and run into lost hikers that cannot find their way out of the woods. Although they ask to stay the night in or around the cabin, Ash insists to Pablo and Kelly that they move on because, “They’re going to get possessed, and then it’s the night train to Kill-adelphia. With stops in Choklahoma City and Die-ami.” Already infatuated with one of the hikers, Heather (Samara Weaving), Pablo agrees to escort them to the trail. 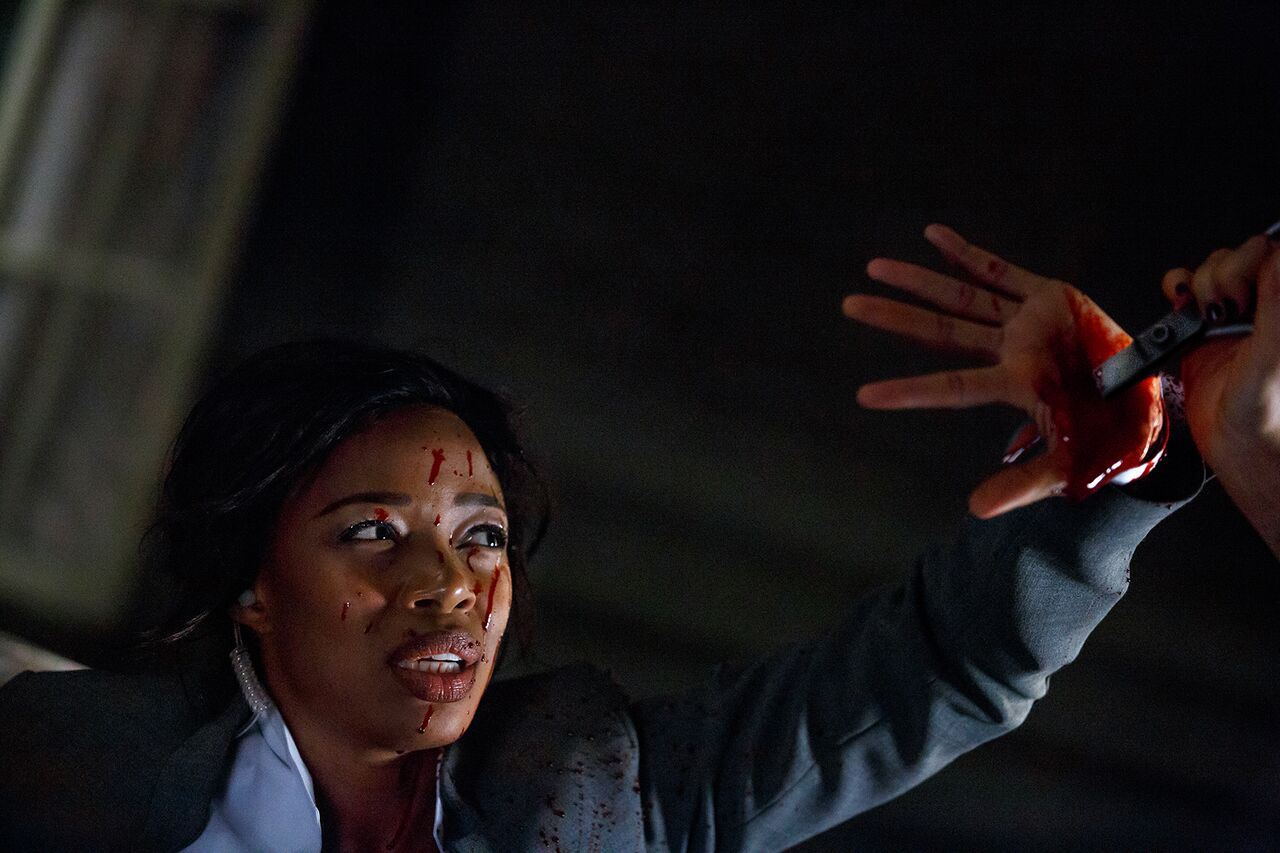 Back in the cabin, Ash finishes hacking up his evil twin, but Amanda’s body has disappeared. Deadite Amanda surprises the gang in the woods by killing two of the hikers. Just as she is about to kill Pablo, Ruby (Lucy Lawless) intervenes with her Kandarian dagger. She says she is there to clean up the mess Ash has made and Ash’s plan of burying the book in the cabin is not a solution. Ruby tells Ash that an ancient weapon must be used to destroy the book, beginning with its iconic face on the cover. He must then present the book to her so that she can carry the burden of making things right again. He uses the dagger to peel off the cover and throws the bloody face across the room. Reluctantly, he submits the Necronomicon to Ruby. She immediately begins to chant as the torn book face attaches itself to Pablo. When Ash asks if she knows what she is doing, she replies “Of course, I know what I’m doing. I wrote this book.” This revelation sends everyone into panic.

Ruby explains that she wants to revert the world back to a time when “Dark Ones,” such as herself, ruled. She would control all of the demons and he can have the life that he has always wanted. No more dealing with evil beings and he can live out his years in Jacksonville, Florida. Surprisingly, he accepts as long as Pablo, Kelly, and the dagger go with him. As the trio head out on the road to their seemingly new lives, Ash ignores an emergency broadcast on the radio advising everyone to stay indoors due to massive sinkholes appearing. He blissfully turns on music and keeps going. 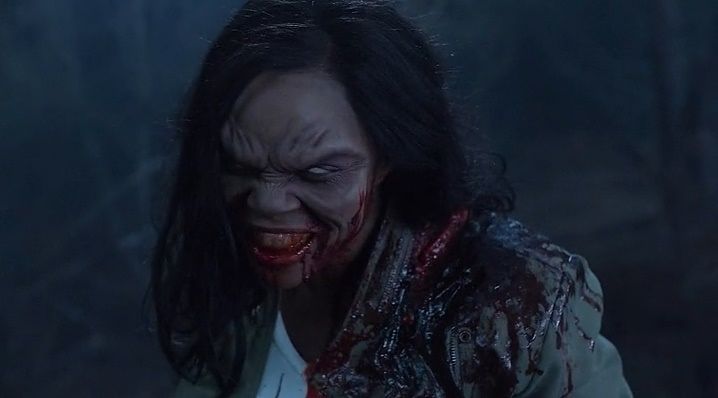 Every episode within the first season brought so much to the Evil Dead world. Fans saw new monsters, met the person responsible for writing the Necronomicon, and traveled back to that old familiar cabin, complete with young Linda’s talking head. While there were many characters lost over the ten episodes, the most devastating loss was Amanda. She started the entire show on such a strong note in the first episode. Just as Amanda was finding her place within the misfit group, and becoming a potential love interest for Ash, she met her demise.

As for actress Jill Marie Jones, she has not been a stranger to Horror television series, acting in both American Horror Story and Sleepy Hollow. Although she has a background in various genres, she is a long time Horror fan, telling CrypticRock, “I was eight years old when my mom was letting me watch. I’m a huge Horror fan in general.” Interesting, and delightful to hear for the Horror buff, most have fond memories of watching flicks they probably should not have been watching. Nonetheless, most are not worse off because of it. Jones added, “Why would you let an eight year old watch the things that I was watching? Because we were both like, huge Horror fans, and I love it.”

In regard to her role on Ash vs Evil Dead, considering the reaction fans had on social media after she was killed off, many wondered if she is going to continue roles within the genre. When asked if this is an interest for her, she explains, “You know what’s a blessing? It’s to be able to work inside your fandom, and I’ve been able to do that. So I would love to continue to do other projects in this genre.” With that said Horror fans hope to see more of Jones sometime in the near future. 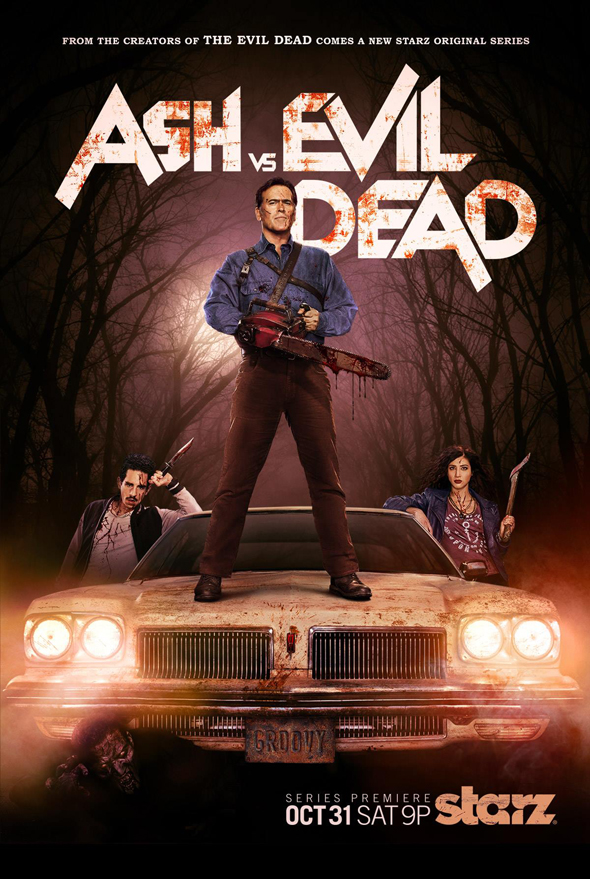 Due to the success of season one of Ash vs Evil Dead, a second season has been confirmed for late 2016. There is no doubt that season two will bring even more bloodshed as Ash, Pablo, and Kelly continue to fight the good fight.
For more on Ash vs Evil Dead visit Starz
For more on Jill Marie Jones: Facebook | Twitter