From the opening strains of Deep Purple’s “Space Trucking,” through to the Amboy Duke’s Heavy Metal song “Journey To The Center of The Mind” over the closing credits, the long-awaited return of Evil Dead icon Ash Williams and his undead nemeses brings joy to fans of the Horror franchise. First revealed at the 2014 San Diego Comic-Con that director Sam Raimi was in fact developing a television series for his beloved saga, Ash vs Evil Dead was finally premiered on Halloween 2015 with the episode entitled El Jefe after a marathon showing of all three films, interspersed with commentary by Bruce Campbell. Reuniting the original team that produced Evil Dead. Executive Producer Rob Tapert, written by Sam, his older brother Ivan, and Tom Spezialy, the debut episode was a hot ticket upon airing on Starz, drawing an approximate 233,000 viewers. 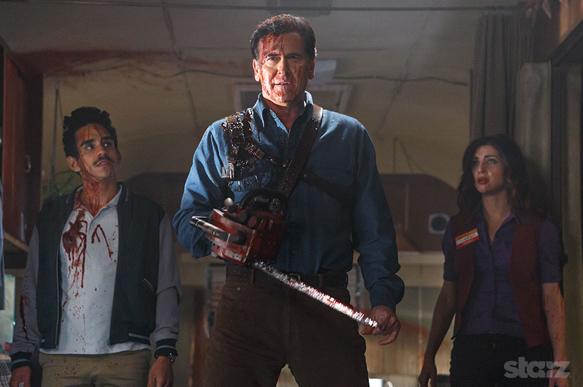 The audience was first introduced to Ashley ‘Ash’ J. Williams, played by Bruce Campbell, back where it started in 1981’s The Evil Dead. This B-movie classic gained cult status and was revisited with Evil Dead 2: Dead Before Dawn in 1987. Dubbed a parody sequel, the second film retold the first story, adding more campy humor and stop-action animation giving this film more of a Comedy feel than the first, but still maintained its Horror element. The ending brought Ash—and his signature ’73 Olds Delta 88, over-the-shoulder shotgun holster, and chainsaw hand attachment—to medieval England. Then in 1992, the film Army of Darkness continued his never-ending war for the souls of mankind. Again retelling the ending of the previous film, changing him from hero to prisoner. At the end of that film, he returns to the present and his job at S-Mart.

The show begins thirty years after the Army of Darkness ends as Ash is in a messy trailer, visibly out of shape and strapping himself into a leather corset. Rocking out to Space Truckin,” the music continues as he drives—yes, in that Olds 88—to, and then enters a divey bar. This is a nice touch, having the background music play through these three separate locations gives a continuity that usually gets lost when the music simply ends as we follow the character. Once in the bar, Ash makes up a lie about saving a child from an oncoming train in order to get a barfly to have sex with him in the men’s room. The music comes back up to highlight his successful ploy.

This may seem over-the-top for the franchise, until to his horror she spins around—with Ash still ‘attached’—and she has the typical face makeup fans have come to associate with someone possessed by the deadites. This scares Ash, but not enough to not finish what he is come for when she switches back to the skank he had picked up. Funny and scary elements that fans have come to expect, all in the first five minutes of the show.

Ash is noticeably nervous about the return of the demons that he had conquered decades earlier. Driving back to his trailer, he digs the Necronomicon—The Book of the Dead, the source of all his troubles—out of trunk and discovers why the Evil has returned to stalk him. He had been smoking pot with a younger woman the night before and read some of the incantations with her as poetry in order to impress her. His ploy unwittingly calls the Evil back, and ultimately dooms the woman.

A police car pulls up to a darkened house. Two plainclothes officers get out of the car, guns drawn. There had been a report of a woman screaming. The officers enter the home and are attacked by the possessed woman that had been with Ash the night before. This is the first big Horror scene. Fans are treated to the mix of fighting, special effects, and comedy gore they have come to expect, and newbies to the franchise will see why it is so popular. Ultimately, the policeman is killed, brought back, and killed again by the policewoman Amanda Fisher, (Jill Marie Jones: The Longshots 2008, Droll 2009). Among the fantastic elements in this scene, is a strobe effect created by a slowly spinning flashlight between the possessed policeman and Amanda.

The next morning, Ash decides he must get help to translate the Necronomicon, so asks an elderly neighbor to straighten up his trailer, before he can leave town, she is momentarily possessed and warns him, “Your time comes again.” As is common in the movies, she changes back to normal. Before he can go to meet the translator, he has to stop at work to collect his check. (Although it does not affect the story, it is not explained why Ash isn’t working at S-Mart anymore—fans will notice the change.) Introduced are two coworkers who will be recurring characters in his fight against the Deadites: Pablo Bolivar (Ray Santiago) and Kelly Maxwell (Dana DeLorenzo). We learn that Pablo considers Ash a role model, and Kelly thinks he is a bit of a leech.

The banter between the characters is hilarious, exactly what is expected from the people that brought us the films. The action switches back to policewoman Amanda in a diner. We learn she has been suspended pending the inquiry into the death of her partner. The face of a child across the room changes to that of a deadite, momentarily startling Amanda. When she looks away, it returns to being a normal child. From the booth next to her, Lucy Lawless, her character name is not yet given, appears and says, “Sometimes what you think you saw, you saw,” foreboding more Evil yet to come.

Upon returning to the store, Ash is in the stock room where we are treated to more special-effect Horror. This is the cute kind of deadly foe. A small doll comes to life and tries to kill Ash. The fight scene is funny and done extremely well. Pablo kills the doll and Ash must explain to him what is going on. In a flashback scene that plays out using actual footage from Evil Dead 2: Dead by Dawn shown on the boxes in the stockroom, Ash recounts why he has to leave and take the Necronomicon to be translated. Pablo tries to talk Ash into staying to fight but he leaves into a violent storm approaching.

As Pablo watches him leave, Kelly walks behind while on a video-call with her father. As she watches in horror, her dead mother returns to her home and the phone cuts out. She asks Pablo for help and they jump on his motorcycle. When they speed out of the parking lot, another signature Evil Dead effect takes place. A ground level camera shot skims across the ground towards them. Evil is coming. Although, we the viewer have never seen what it is exactly, we can see in the horrified expressions of those on screen, that it is something to be mortally afraid of. It enters the store manager and the screen goes blank. Pablo and Kelly skid up to Ash’s trailer as he is packing to go. Outside, Evil approaches the trailer and begins smashing against the metal hull and skittering across the roof. Still intent on leaving, Ash tells Kelly he cannot help her father. She is attacked while standing next to a window and the final fight scene of the episode is on.

Showing that he has never really stopped being prepared for this eventuality, he flings an axe that conveniently hangs from a hook on the wall chopping off the assailant’s arm. Finally admitting to himself that he has no choice, he slings on the shoulder-holster, steps on a paddle built into is floor, ejecting his shotgun up into the air where he catches it and shoots a deadite behind him; signature Ash. Again he denies Kelly’s request for help. He turns to leave, he opens a closet, and as heavenly music plays in the background, the outline of his chainsaw is seen behind a curtain. He moves the fabric to expose the elderly neighbor, possessed again and out for blood. The fight is funny, gory, and violent. In other words, perfect. He finally agrees to fight. Pablo asks him how it feels to be back. Ash’s response, “Groovy.” Cue the Amboy Dukes. 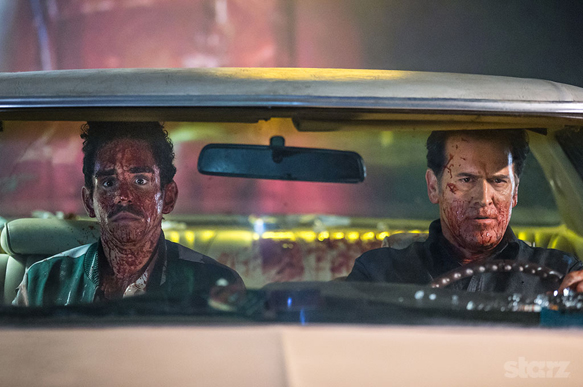 Bruce Campbell’s words before the premiere episode describe the TV show exactly as fans had hoped it would be, “Everything you love about these movies…Horror, Comedy, gore, Action, and Ash getting beat up for your amusement.” They score on all points. Hail to the King, baby. CrypticRock gives Ash vs Evil Dead’s Eel Jefe 5 out of 5 groovy stars. 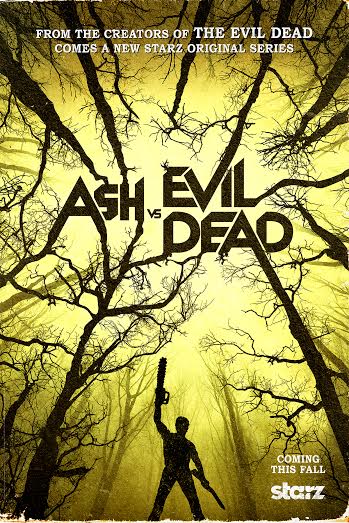 For more on Ash vs Evil Dead visit Starz