Because donuts are funnier and scarier than tomatoes, coming to select theaters and VOD on November 17, 2017 via Level 33 Entertainment is the Horror Comedy that could be sweet as sugar, turn legs to jelly, or cause eyes to be glazed over known as Attack of the Killer Donuts. 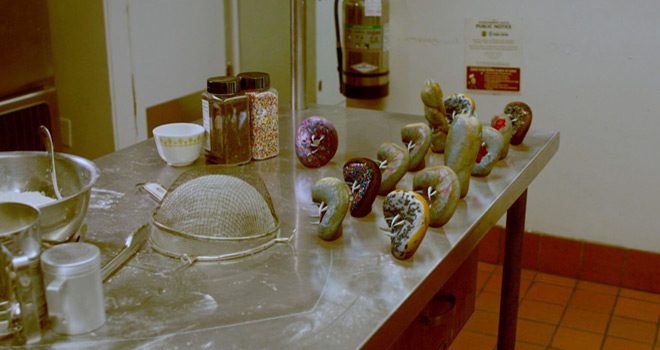 The story starts when Johnny (Justin Ray: 1 Chance 2 Dance 2014, Disaster L.A 2014) is an unfortunate worker at the Dandy Donuts store, caught between satisfying his girlfriend Veronica (Lauren Elise: Red Velvet Cake 2014, Clowntown 2016) and keeping his mom (Kassandra Voyagis: Cleopatra 1999, Jane the Virgin series) happy. Then, things take a turn for the worst when an experimental chemical created by Johnny’s mad scientist uncle Luther (Michael Swan: Friday the 13th Part VI: Jason Lives 1986, Captain America: The First Avenger 2011) gets into the store’s deep fryer. The result is a horde of pernicious pastries that take no prisoners. Can Johnny and his friends Howard (Ben Heyman: If the Trees Could Talk 2014, Joy Ride 2014) and Michelle (Kayla Compton: King’s Faith 2013, Chase Champion mini-series) save the town from these killer donuts?

Okay, it is not high art, and it is not supposed to be. Writers Chris De Christopher (Death Racers 2008, Piranhaconda 2012) and Rafael Diaz-Wagner (Porkchop and a Glass of Water 2006, Sharkansas Women’s Prison Massacre 2015) have experience in creating goofy schlock, joined by relative newcomer Nathan Dalton (Home for Detention 2018, Beaten Path 2018). Director Scott Wheeler is also experienced in the ways of silliness with 2014’s Avalanche Sharks and mockbusters of 2009’s Transmorphers: Fall of Man, so it would be fair to put this in the same pile as the Sharknado series. 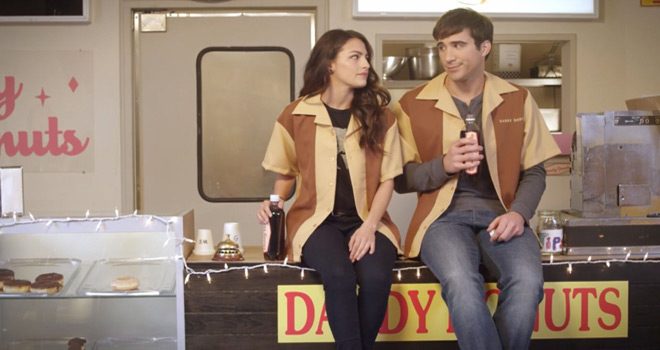 In fact, Wheeler even worked on 2017’s Sharknado 5: Global Swarming as the visual effects producer, amongst many other DTV films. So then, expectations are not exactly high. This is not going to be the kind of thing people would find Daniel Day-Lewis or Dame Judi Dench appearing in. Although, it does have C. Thomas Howell (E.T. The Extra-Terrestrial 1982, Soul Man 1986) turning up as a hammy police officer, fighting against chocolate-coated irony.

There are noticeable flaws in Attack of the Killer Donuts, like the awkward camera cuts, the late ’90s quality CGI, missing sound effects, and the cheap cinematography. This does not make it an awful film. The humor, while often dumb and puerile, does have the odd smile-inducing joke or slapstick stunt (“We’re about to become snacks…for the snacks!”). The practical effects are not half bad either, doing an adequate job at resembling gore, vomit, and, um, ‘evacuation.’

Additionally, the acting is also decent, in that the cast neither phone in their performances or take it too seriously. Ray’s character comes off as a likeable schlub – sad enough to earn sympathy, but not so sad that he loses it. That honor would go to Heyman’s Howard, the butt of many jokes, but he comes off well too – neither too obnoxious nor lacking in character. The strongest performance would have to go to Compton’s Michelle, as she receives the best lines with her smart-aleck responses, and does a convincing job as the forlorn friend who knows Ray’s character can do better. 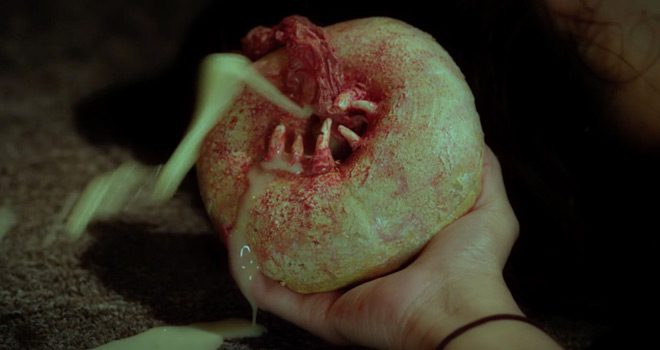 These three play the straight men (and woman) to the rest of the cast, as they range on different levels of ham. On the low end of the spectrum is the surprisingly sophisticated hobo Homeless Jack (Sean Smith: Brothers Three 2010, Gangsters and Zombies 2017), with his manners being better than his hygiene. In the middle is Writer De Christopher himself, making an appearance as the Dandy Donuts’ sleazy, wig-donning owner. At the high end is Howell himself as Officer Rogers, chuckling and mugging like he is having the time of his life on set. He comes off so manic that he leaves his relatively strait-laced partner, Officer Hammerstein (Frederick Burns: Nautilus 2000, Cleaver Family Reunion 2013), in the dust. Yes, Rogers and Hammerstein; that is one of the smarter jokes in the film.

Ultimately, there are better films out there with similar stories that are more preferable, like the Gremlins series. If it can be found cheap on its VOD release, or is part of a subscription service a la Amazon Prime, then it would not hurt to give Attack of the Killer Donuts a viewing. Like an actual donut, it is not something people would want to have regularly, and it will not do them many favors, but it does have a sweet taste for anyone curious enough to give it a try. For these reasons, CrypticRock gives this film 3 out of 5 stars. 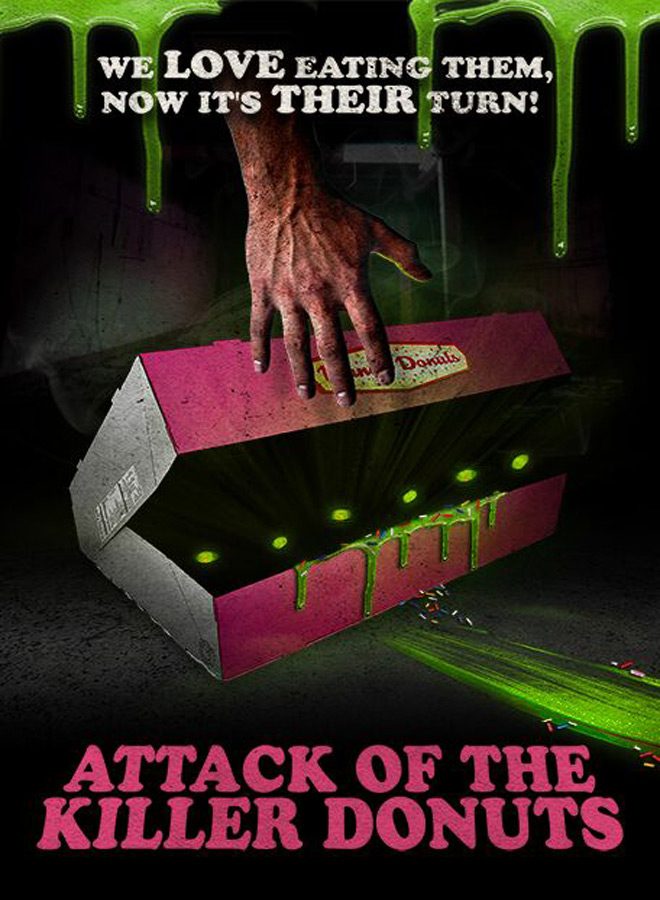 Purchase Attack of the Killer Donuts: