Attila, Upon A Burning Body, Iwrestledabearonce, The Plot In You, & Fit For A King Sellout Gramercy Theater, NYC 11-4-13 (Exclusive Coverage) 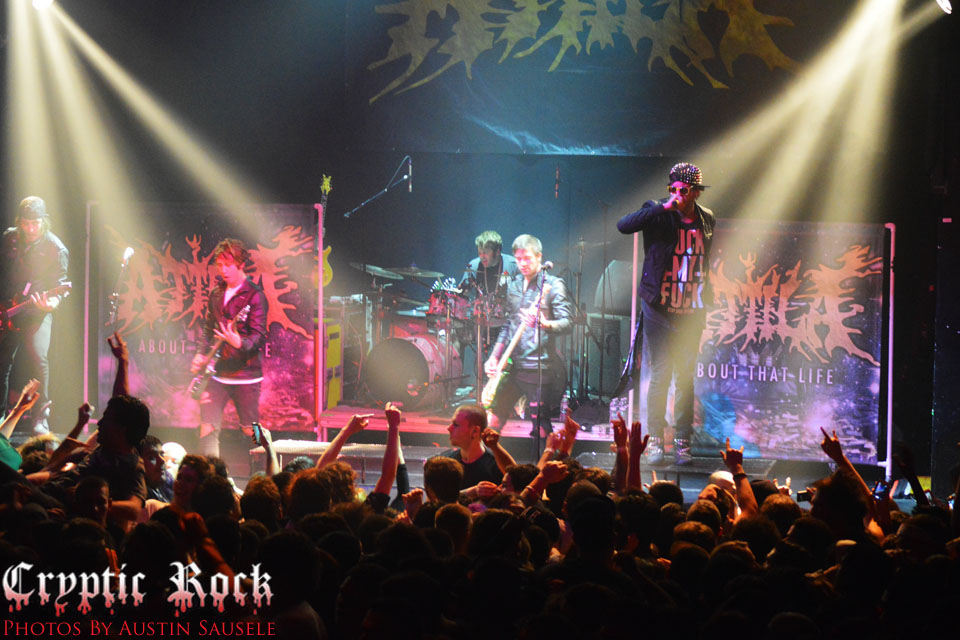 November 15, 2013 Attila, Upon A Burning Body, Iwrestledabearonce, The Plot In You, & Fit For A King Sellout Gramercy Theater, NYC 11-4-13 (Exclusive Coverage)

Late this summer when Attila announced “The About That Life Tour” with support from their friends in Upon A Burning Body, Iwrestledabearonce, The Plot In You, and Fit For A King – one thing came to core fans mind, full blown chaos! Starting in middle October, the tour has blazed through a list of cities across America and now it was time to conquer Gramercy Theater in NYC on Monday November 4th. 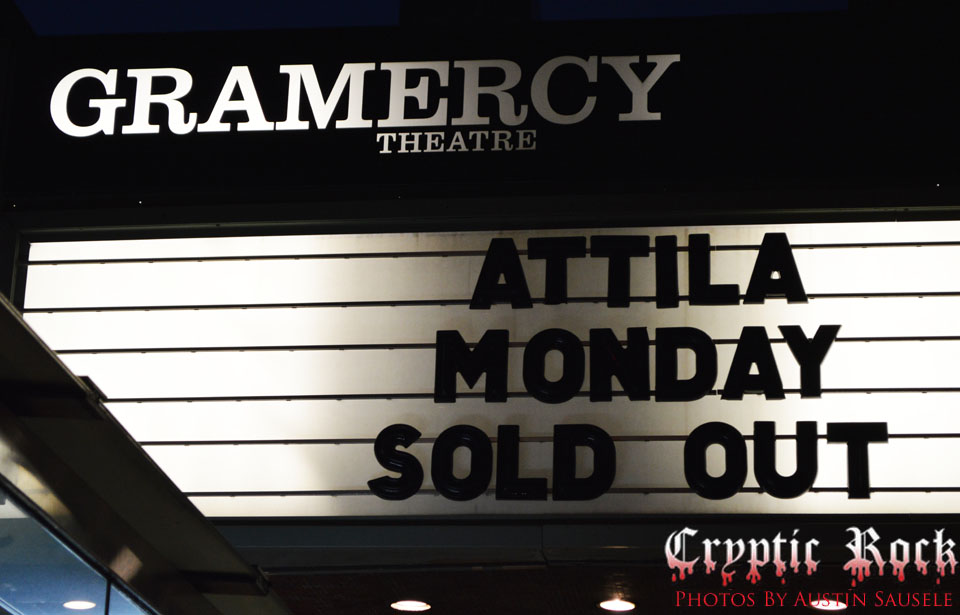 Starting the riot off were Christian metalcore band Fit For A King. Bursting onto the Dallas, TX scene back in 2007, the 4 piece band released their major label debut on Solid State Records in 2013 with Creation/Destruction. What a fitting way to bring further awareness to the band than an opening slot on “The About That Life Tour”. Their potent blend of melodic metalcore ignited excitement early on. Ryan Kirby’s bellows into the microphone was followed by Aaron Kadura’s (bassist) crystal clean vocals. Kadura’s vocal approach is reminiscence of Speed Bjorn of Sweden’s Soilwork. The mixture of the harshness and melodic vocals really made these guys stand out along with the rhythm section of Bobby Lynge (guitar) and Jared Easterling (drums). It’s no wonder these guys are getting such rave reviews from fans and critics with the release of Creation/Destruction.

After an impressive performance by the opening act, next up were The Plot In You. Riding high since the release of their 2nd album Could You Watch Your Children Burn earlier this year, these guys were ready to show Gramercy Theater what they are made of. With Derrick Sechrist (guitarist) joining the fold in 2011, a dynamic passionate clean vocal was added to the band. Now in 2013 the band added Kevin Rutherford on drums, which formerly battered for Like Moths to Flames. As the band hit the stage they assaulted the crowd with crunching guitars and sore throat core vocals from Landon Tewers. With tracks like “Troll”, “Premeditated”, and “Fiction Religion” the guys filled out a strong 7 song set nicely. There is obviously a sense of fury raging from their veins, yet a sense of depth which can be intriguing to listeners.

Our next act was eclectic metalcorers Iwrestledabearonce. If there is one thing you can say about Iwrestledabearonce it is do not expect your typical metalcore band. Their sound is rather eccentric with touches of avant-garde, synthpop, jazz, and everything in between. Their chaotic and unconventional approach has managed to build them as an act to see among their peers. Their diversity was evident with songs like “You Know That Ain’t Them Dogs’ Real Voices” which can be best described as chaos to the catchy powerful track “Boat Paddle”. The addition of Courtney LaPlante on vocals after the departure of Krysta Cameron after giving birth in 2012 has worked well for the band in many aspects. LaPlante has a presence on stage which is interesting to watch and make Iwrestledabearonce an interesting watch and listen.

It was time for the mafia known as Upon A Burning Body. This deathcore act from San Antonio, TX have been lighting up stages for some time now. There biggest break was landing a spot on the Mayhem Festival last year stimulating a buzz that helped land them on this year’s Warped Tour as well. With that type of mass exposure there is no secret why they are climbing in the rankings and their 2nd album, Red. White. Green., debuted at No. 105 on the Billboard 200 in 2012. Excitement was elevated as the dapper dressed 5 piece gang hit the stage. The scene was set with the killer opening “Showtime” where the Don himself Danny Leal welcomed NYC to the family. This lead into an eardrum busting set of relentless deathcore. Songs like “Intermission” and “Once Upon a Time in Mexico” started a massive circle pit which lasted the duration of their set. Leal encouraged fans to keep this ferocious massive pit going and for crowd surfers to make their way to the front, grabbing their hands as they did so. The set closed with the biggest explosion of track “Sin City”. It’s safe to say Upon A Burning Body stole the show with a violent and powerful performance.

With blood flowing through their veins and sweat dripping from their skin these fans were ready for the main attraction Attila. Although critics are giving their latest album About That Life negative feedback, fans are singing a different tune. Fans of this Atlanta, GA based core band act know what to expect with Attila and that is metalcore laced with fun party-like rap. Sometimes it’s not up to the critics to decide what fans like and dislike and Attila is living proof of that. Their success has landed them a headlining tour with a sold out crowd of fans screaming their praise. Chris “Fronz” Fronzak and his clan marched out on stage with “Middle Fingers Up”. Putting on a tight vocal performance, Fronz blasted through an hour long set highlighting tracks off About That Life such as “Hellraiser” and “Party With The Devil”. The crowd surfing was so extensive that the security couldn’t hold it all and this metal party proved insane.

Their set closed out with an encore of thrashing track “Payback”. Whether you are a fan or not of Attila, it doesn’t matter. What matters is these guys put on one hell of a show and keep their fans attention throughout. It could very well be metal has become too serious in the past 10 years and Attila is just the band to bring some fun back to the genre.