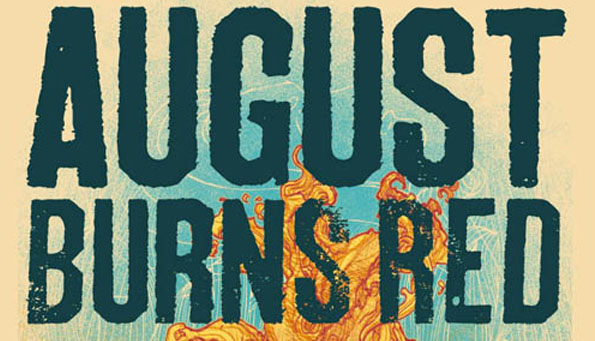 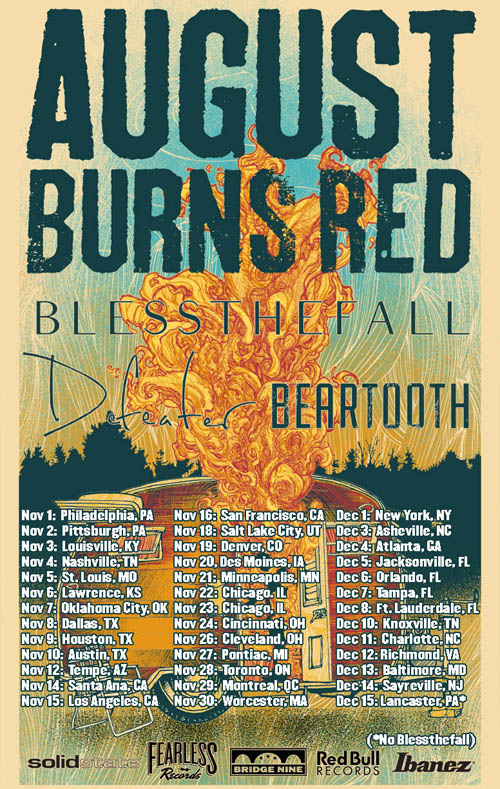 Billboard Top 10 metalcore act August Burns Red has announced dates for an upcoming national fall headline tour which kicks off November 1 in Philadelphia, PA and runs through December 15 in Lancaster, PA. Lending support will be Blessthefall, Defeater and Beartooth.

Fans can purchase tickets and premium bundles including t-shirts, hats, dog tags, posters and more now through SHOWstubs.com/abr. The public on sale date for tickets is Friday, August 23rd starting at 10AM local time (check local listings as times may vary).

The Lancaster, PA rock outfit will be out in support of their fifth studio LP, Rescue & Restore (Solid State), which debuted at #9 on the Billboard Top 200 last month. This impressive feat improves upon the #11 debut of the album’s predecessor, 2011’s Leveler.

Rescue & Restore is a colossal effort which turns a critical eye to the oft-maligned genre of metalcore, leading by example to prove that bands can still find exciting new ways to expand the genre without simply falling into repetitive trappings.

In its review of the new LP, Alternative Press notes, “Now a decade into their career, August Burns Red have stated they are on a mission to revive metalcore from its self-induced coma of conformity, and their latest puts the band’s music where their collective mouth is. An immediately impressive work of skill and creativity well-removed from the rehashed riffs and tired scream-sing antics that plague the genre, Rescue is a bold step forward for both the band and anyone attempting to follow it.”

“Rescue & Restore is about challenging other bands and ourselves, as well as fans of this music, to want more than whatever happens to be the current buzz,” explains guitarist and principal songwriter JB Brubaker.

Since launching out of Manheim, PA, the industrious outfit has successfully transitioned from shake-up-the-field upstarts to one of the biggest names worldwide in the genre. On stages across the U.S. to Europe, Japan, Australia, South America and more, from renowned fests such as UK’s Download Festival to the Warped Tour, which they joined again in 2013 as a mainstage act, AUGUST BURNS RED have spent years taking their music and message directly to fans, and in the process have grown into one of the leading forces in the modern metal scene.