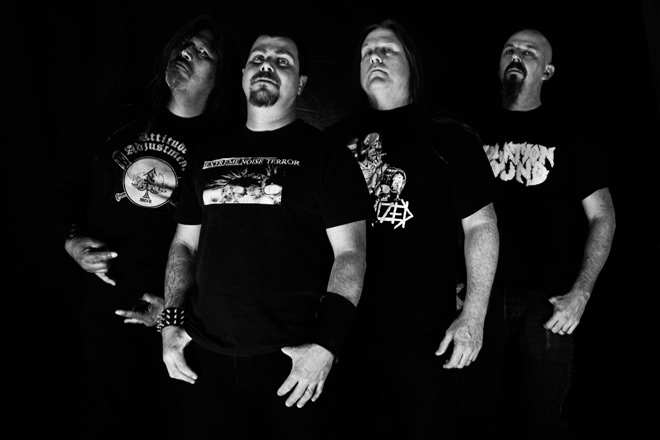 One would think thirty years passing would reduce a band to scraping the barrel for sickening themes, diseased riffs, and filthy topics right? Well, think again because here we are with Puncturing the Grotesque, the latest offering from American Metal legends Autopsy. Set for release on Friday, December 15, 2017 via Peaceville Records, bookended by a screeching intro and an odd cover-of-a-cover, this mini-LP boasts 24 quick minutes of plodding doom and sickening bouts of speed.

Formed in the Bay Area during the nascent 1980s by Drummer/Vocalist Chris Reifert, formerly of Death, and Guitarist Eric Cutler, the band was rounded out by Guitarist Danny Coralles and a rotating series of bassists. Through the years Autopsy released four acclaimed albums on legendary label Peaceville Records before splitting ways in the mid-90s. In that time Reifert and Coralles shifted their full-time focus to the side project Abscess.

Calls for a reunion of Autopsy came to fruition in the late aughts, which saw the band record a handful of new tracks for inclusion with reissues of their classic work. Steady Bassist Joe Trevisano, plucked from Abscess, was now along for the ride, which saw the band release three new albums, three new EPs, and make several live appearances, including Maryland Deathfest.

Now with the lineup of Reifert, Cutler, Coralles, and Trevisano, they entered Earhammer Studios in Oakland, CA with Co-Producer Greg Wilkinson to work on the seven new tracks of Puncturing the Grotesque. Dubbed a mini-album, it all begins with “Depths of Dehumanization” – bringing the listener in with growling and meandering moans of despair, before giving way to the title-track. A steady gallop of brutality peppered with howling solos halfway through, these cuts are ripe with the guttural snarls expected of Reifert.

Then comes “The Sick Get Sicker,” arguably the strongest track of the collection. Starting with its own mid-tempo gallop, it breaks into slow morose wails on guitar and vocals, each crying out in agony. The gallop resumes as guitar solos come into the fray, and the vocals continue the twisted narration. The funeral movement again comes into focus, giving context to the meandering screams of a madman, before a second progression of guitar solos rip even deeper.

The frenzy that closes “The Sick Gets Sicker” is immediately cooled by the slow dirge of “Gas Mask Lust” where the first three-quarters of the song plods along at a slow pace, before a barrage of solos stir the corpse back to life. This is before “Corpses at War” comes in with more slow dirges mixed with rising gallops and guitar solos. Moving along, a creepy grave cackle opens “Gorecrow,” before going into oscillating guitar, that again falls, aside for a frenetic gallop into madness. Somewhere amongst these last few tracks, Puncturing the Grotesque starts to feel a bit formulaic. That in mind, it is hard to pinpoint exactly when and where, mainly because the formula itself just works.

Rounding out the collection, “Fuck You!!!” is presented as a re-recording of an old Bloodbath (US) song, a band which once featured Coralles on guitar. The track also appears separately on a split 7″ with the Swedish version of Bloodbath for those interested. All in all, although quick to the finish, Puncturing the Grotesque further cements the legacy of Autopsy. Now fans only hope it is a precursor to more recordings and live appearances in the near future. For these reasons, CrypticRock gives this album 4 out of 5 stars. 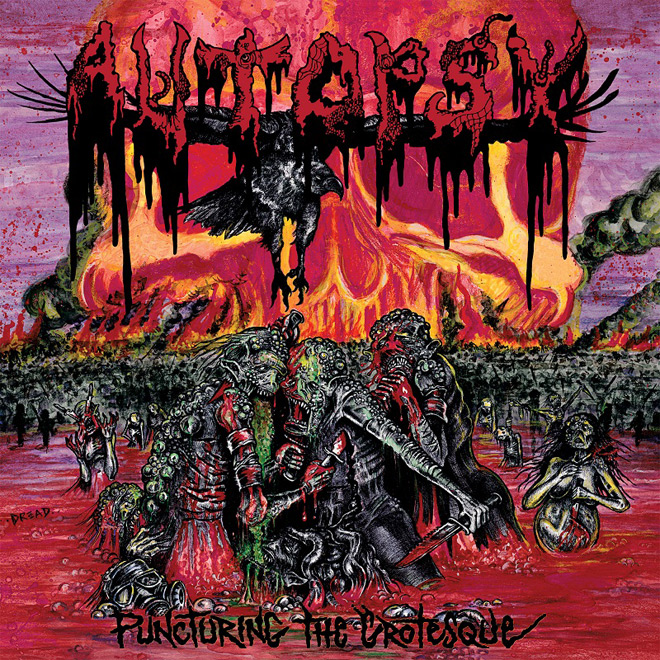