Currently traveling as a part of Metallica’s highly touted WorldWired spring festivities, Avenged Sevenfold are also taking the driver’s seat on select off shows. Sure, most of the band’s dates through August are supporting Metallica, but those who look closely at the schedule will see a list of easter eggs for a chance to see Avenged Sevenfold headline. That said, on Tuesday, May 9, 2017, they took time off from being openers to present their headlining act, The Stage World Tour, to Hershey, Pennsylvania’s Giant Center.

The Giant Center in Hershey is a 10,500-seat arena and home to the much beloved Hershey Bears Hockey Club, as well as being a star-studded performance venue that hosts many of the largest concert tours when they make their way through Central Pennsylvania. Kicking off the show relatively early, doors opened at 5:30 PM as the arena became the second home to Metal’s current kings Avenged Sevenfold and their Danish friends Volbeat, as well as Pennsy’s own Motionless In White. While the crowd was not at capacity, it was generously packed and fans were no less hungry for a molten dose of heavy and all things rock!

First up were Motionless In White (or MIW). No strangers to touring, they are the sole band on this lineup who are not touring with Metallica’s WorldWired package this spring. In fact, they are currently on tour with In This Moment’s Half God/Half Devil tour, and will be performing at Ohio’s Rock On the Range in just over a week. A band that hails from the 570 – Scranton, which is a mere 2 hours from the 717 of Hershey – consider that this was a semi-homecoming for the quartet who are living high with the release of their latest (epic!) album, Graveyard Shift. If you can keep your coffin fetishes in-check, do check out their shiny new video for the fully-infectious “Eternally Yours.”

Chris Motionless and co. took to the stage, performing in front of a banner festooned with the slightly-creeptastic Graveyard Shift cover. Ready to remind their Pennsy brethren what good, heavy music is all about, they exploded into “A-M-E-R-I-C-A” off their Infamous release, a quasi-political commentary on the state of affairs here in our lovely little, dying nation. This was followed by MIW’s war cry, “Loud (Fuck It),” off their brand-spanking-new disc, and the cinematic Horror-fest of “Dead As Fuck” off Reincarnate. The hugely popular “Devil’s Night” – with its pulsating bass and blistering Metal – amped the band’s set up twelve notches as the crowd went wild.

They soon followed with the delicious, sensual lines of “Reincarnate” and that burning witch of a lost love, “Abigail.” A recent fan-favorite, “570” was an epic finale for the band’s set on this evening. Heavy, uncompromising, and an ode to a hometown not-so-far-away, the song blasted Motionless In White to a truly epic, headbanging denouement. Everyone at the Hershey barricades knows it to be true: this band needs to be headlining! 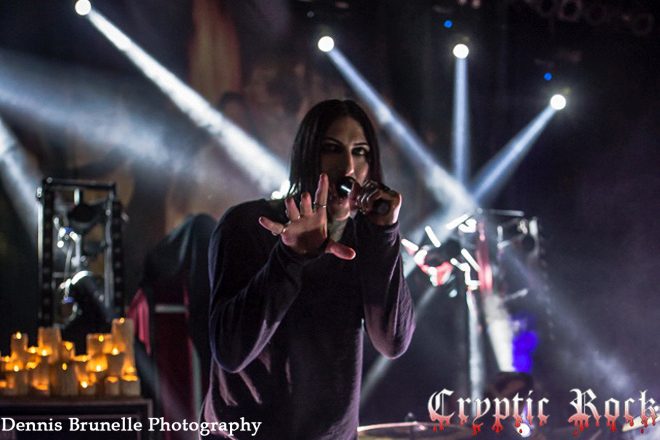 Next to the stage would be the Danish Metal quartet Volbeat. Equal parts Metal and melody, these Danes present a delicious fusion of sounds that, ultimately, pays a beautiful tribute to the Heavy Metal of yesteryear and yet sounds entirely 2017. Their most recent release, 2016’s Seal the Deal & Let’s Boogie!, received stellar reviews, and by the looks of the fan turn-out in Hershey, it is easy to see many love these Europeans!

Volbeat – Vocalist/Guitarist Michael Poulsen, Guitarist Rob Caggiano, Bassist Kaspar Boye Larsen, and Drummer Jon Larsen – took to the stage to the massively well-received Thrash and Rockabilly concoction that is “The Devil’s Bleeding Crown.” They paused only for a second to introduce “Lola Montez,” a catchy little ditty about a beautiful Latina named Lola. Performing in front of a banner depicting the Seal the Deal album cover, the quartet presented a delicious homage to old-school Thrash – and even name-checked Metallica -with one of their heaviest tracks, “Wild Rover of Hell,” a clear fan-favorite.

Taunting the crowd with a short aperitif of Johnny Cash’s “Ring of Fire,” Vocalist Poulsen discussed the greatness of the legendary Cash before leading the band into their own dirty Country-influenced grit of “Sad Man’s Tongue.” The upbeat rocker “Black Rose” segued flawlessly into the epic Metal tale of “Doc Holliday.” The barricades were headbanging for “Another Day, Another Way,” the infectiously catchy “Let It Burn,” and superb Thrash assault of the largely-instrumental “Slaytan.”

Straight-up rocker “Dead But Rising” and the good time of “Seal the Deal” led the band toward their grand finale. Before tackling their final song of the night, Poulson took a moment to introduce his talented band-mates with the crowd going wild for each of the Danish musicians. Poulsen then thanked Avenged Sevenfold and Motionless In White, and propelled the group into their epic finale, a beautifully fun tribute to being a self-proclaimed asshole, “Still Counting.” As the band’s banner was lowered to the ground, Volbeat walked the stage thanking the fans for coming out and doing a ceremonial tossing of guitar picks, drumsticks, and a drum-head that made one fan in the pit extremely elated. All told, Volbeat’s set read like a gorgeous best-of representation of their superb musicianship and exceptional sixteen-year career. 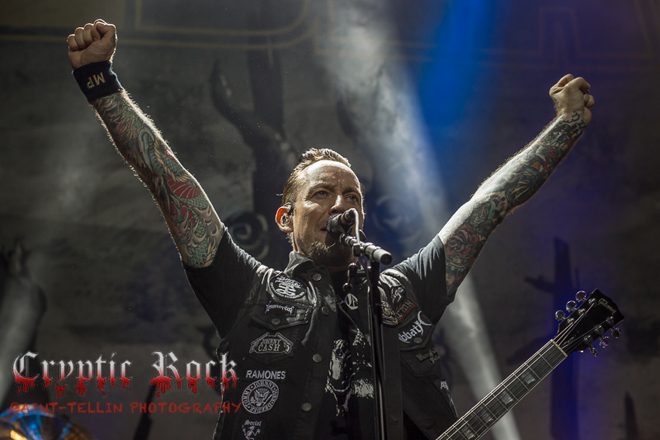 Headliners Avenged Sevenfold (A7x to the anointed) are no strangers to, ahem, The Stage: in fact, it is the title of their newest release and this world headlining tour. This quartet of Southern Californians got their start in music in 1999 and, with just under two decades worth of recording and touring under their belt, these men have seen some epic professional highs, as well as the lowest of personal lows. Through it all, their spirit of camaraderie, love of Metal, and dedication to their fans (the Deathbat Nation) have persevered. Hail to the kings!

Avenged Sevenfold should never be relegated to the opening slot and, on this evening, they were indeed not: headlining their own world tour in honor of 2016’s The Stage. A7x – Vocalist M. Shadows, Guitarists Synyster Gates and Zacky Vengeance, Bassist Johnny Christ, and Drummer Brooks Wackerman (remember Bad 4 Good?) – immediately launched into “The Stage,” the first single/video from their unique album of the same name. They followed their assault with fan favorite “Afterlife,” from their superb 2007 eponymous disc.

As he worked the crowd and spotted familiar faces, Shadows dedicated “Hail To The King” to some kid with “amazing hair” and the fans went wild – hopefully it was for the music and not the hair. “Paradigm,” as with the majority of the tracks performed from The Stage, was met with a mixed crowd response: the die-hards at the barricades seemed to know every lyric, while many other fans met the band’s newest material with curious intrigue. Nightmare’s “Buried Alive” bridged the gap beautifully between the old and new material. 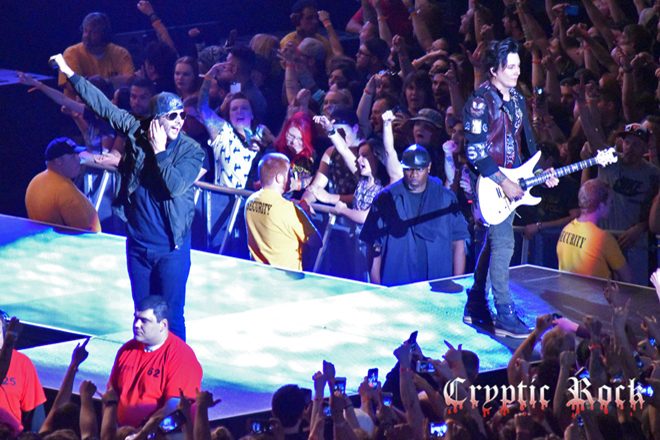 Any longtime fan of Avenged Sevenfold holds a very special place in their heart for the Rev, Jimmy Sullivan, who tragically passed away in 2009. Gone but never forgotten (forREVer), the much beloved Avenged Sevenfold drummer was honored in a poignant pictorial tribute during the band’s performance of “So Far Away.” It was a moment that is about as close as Avenged Sevenfold will ever come to emotionally-moving, and the crowd raised cellphones and lighters a-plenty in tribute to the Rev.

Taking the performance back to full throttle, the band tackled their pure Metal “Nightmare,” which received plenty of Metal horns, as did the equally rocking “God Damn,” the brand new single/video. A pause to appreciate the talents of the band’s exceptionally-talented Drummer Wackerman (who was formerly a member of Bad Religion) flowed beautifully into their hit single, “Almost Easy,” one of only three tracks performed from the group’s 2007 eponymous disc (their best and their last with Sullivan). As they brought out another new track, Shadows noted that the band were playing “Sunny Disposition” for the very first time in America and further promised that the chorus was made for dancing. No judgements, folks!

Between songs, Shadows took time to thank both Volbeat and Motionless In White for coming out to support them on this date. Volbeat, he acknowledged, have traveled far and wide to come to America, and Shadows expressed a vast appreciation for this fact and the band’s craft. He further informed fans of Motionless In White’s new album, Graveyard Shift, and urged the crowd to pick up a copy. (Indeed, it is a superb album!) Pausing to pay tributes to the immense talents of Gates – who is truly the Slash of this generation (minus the fun hat!) – he performed the instrumental “Warmness on the Soul” – joined by fellow Guitarist Vengeance – before the full band kicked in and performed a pair of tracks from Hail To The King, the interstellar “Planets” and epic love song “Acid Rain.” These two tracks saw the appearance of a massive skeleton-astronaut (skelastronaut?) rising above the crowd and proudly donning an A7x patch!

Clearly, Avenged Sevenfold saved the best for last, as it were, and their encore contained two of their biggest hits and a beloved fan favorite – full-throttle rocker “Bat Country” (the sole representation of the band’s superb City of Evil), the perversely cinematic “A Little Piece of Heaven,” and first ever single/video, “Unholy Confessions.” The crowd went absolutely wild for the band’s deliciously heavy, rocking encore. Avenged Sevenfold are a band who never disappoint. With chances to see them alongside Metallica – as well as day off gigs on their own – there is truly no excuse to miss this band as they travel the U.S. this spring. Be there! 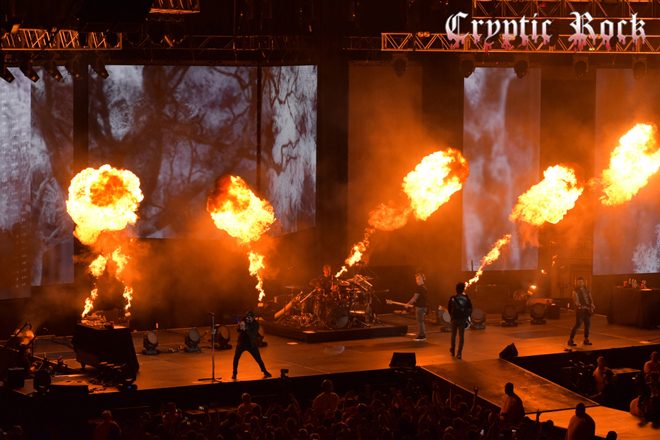