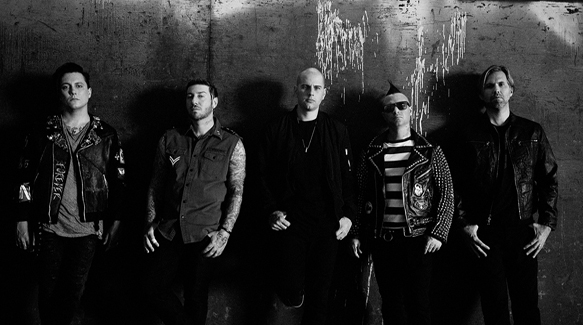 Avenged Sevenfold, aka A7X, came to life in Huntington Beach, California back in 1999. Forging ahead as a Metalcore band, they released their debut album, Sounding the Seventh Trumpet, in 2001 while subsequent releases have seen their sound evolve and progress, leaning more toward traditional Heavy Metal and Hard Rock.

Progressing with each passing album, 2010’s Nightmare made the biggest impact of any of their albums, coming soon after the tragic death of their drummer, James ‘The Rev’ Sullivan, in 2009. An album which saw them evolve more towards Progressive Metal, and even at times Black Metal genres, it opened avenues for new fans to discover them.

Following up with the impressive Hail To The King in 2013, the current lineup of M. Shadows (vocals), Zacky Vengeance (rhythm guitar), Synyster Gates (lead guitar), Johnny Christ (bass), and new arrival Brooks Wackerman (drums) are back with The Stage. Their seventh overall studio album, The Stage comes as something of a surprise, released without warning on October 28, 2016 via their new label Capitol Records.

Designed as a concept album, its theme deals with the impact of Artificial Intelligence upon society, and the lyrics were inspired by the work of Carl Sagan (The Dragons of Eden, Broca’s Brain and Pale Blue Dot) and Elon Musk (co-founder, CEO & Product architect at Tesla Motors). Produced by Joe Barresi (Chevelle, Bad Religion) and the band, it also boasts their longest song ever, their trademark spectacular album artwork, and it was initially live streamed in 3D/360 virtual reality on the day of release. A lengthy effort of 73:35 minutes long, there are eleven songs that do not short change on quality or length, offering plenty of music for the money.

Kicking off the album with the title track, it is a 8:33 minute consideration of the state of humanity today. Double kick drums, Thrash speed guitar riffs, and Doom laden melodies are the backdrop for the high-pitched vocals that M.Shadows is so well known for, this breaks into a stunning Blues/Rock style solo, while the ending is more Classical in style. Continuing with “Paradigm,” a song about nanobots and whether we are more machine than human, while the narrative is science fiction, the music is very real, dramatic, and gritty. Anything but cheerful, “Sunny Disposition” deals with the subject of nuclear warfare, incorporating the unexpected brass section, it ranges from the frantic panic-driven guitars to the cool harmonies, slick, enigmatic and captivating, a masterclass in songwriting.

For the next offering, “God Damn” mixes double-timed drums with Sci-Fi inspired guitar riffs and elements of Spanish influenced acoustic notes, the harmonies are sublime in this, the shortest, song on the album. Then there is “Creating God,” which considers the fact that ‘god’ is a man-made creation, and how that impacts upon society as a result, with fluctuating speed emphasizing the melodic choruses. “Angels” continues in the same questioning religion vein; sad, mournful, and haunting, a very atmospheric song. Moving from religion to something that is fast becoming a reality, the concept of synthetics, human-like robots that could be part of our world in a very short time, “Simulation” looks at the future, it shows the darker side to what might happen. It is a diverse and theatrical song, with spoken word, sweet harmonies, and discordant screaming guitar. With the first synths due to go on sale next year, this looks at what might be waiting for us if we replace ourselves with robots, and what it means to be human.

A church organ ushers in the start of “Higher,” a song about a failed NASA test, which also utilizes a female choir, which complements the song brilliantly. It also echoes the ideas of Elon Musk about humans living in space, not on Earth, in the future. Again touching on the conflicts of religion and science, “Roman Sky” focuses on the death of Giordano Bruno, who was burnt as a heretic in Rome, 1600, for his theories about the universe being infinite and that the stars in the sky are in truth other suns, giving rise to the possibility of alien life, ideas the Catholic Church were keen to quash as it weakened their control over people. Space exploration is the theme of the next song, “Fermi Paradox,” too, a moody offering which suggests that, with space travel becoming a possibility for more of us, religion will have no place in society.

Finally comes astronomic 15:41 minute long song, “Exist.” A masterpiece, the first 7 minutes are a climatic instrumental rendition depicting the creation of the universe, it changes and evolves throughout. A brave move for a band so defined by the vocal style of its singer to embark upon an instrumental piece, a modern day Holst perhaps. At the seven minute mark, it changes, M.Shadows makes his vocal entrance, as the song moves to the creation of the Earth within the universe. Ethereal harmonies and cello combine to give it an emotional voice. Into the finale of the song, it switches again, instrumental music become a backdrop to spoken word, the voice of Neil deGrasse Tyson, a noted Astrophysicist, cosmologist and author. With a stark warning about society, religion and science, it reminds us how small we are in the grand scheme of the universe.

All in All, The Stage is a stunning work. In fact, it is the best thing the band has produced. Musically, it entertains on a higher level, so far from the band’s beginnings, this is a marked departure for them. Although, what it misses is the aggression that was evident in songs such as “Nightmare,” some of the subject matter should create anger. Instead it seems very adult and mature, rendering it a little passionless, the vocals are less bitter, more sensitive, maybe through age and experience, the pain of loss has mellowed in the six years since the creation of that album.

Nonetheless, the more fans listen to The Stage, the more they will come to love it. Melodic and beautiful, M. Shadows’ voice has improved with age. In addition, the skills of the musicianship and songwriters are very much in evidence, and without question, The Stage should become a future classic album. CrypticRock gives this album 4.5 out of 5 stars. 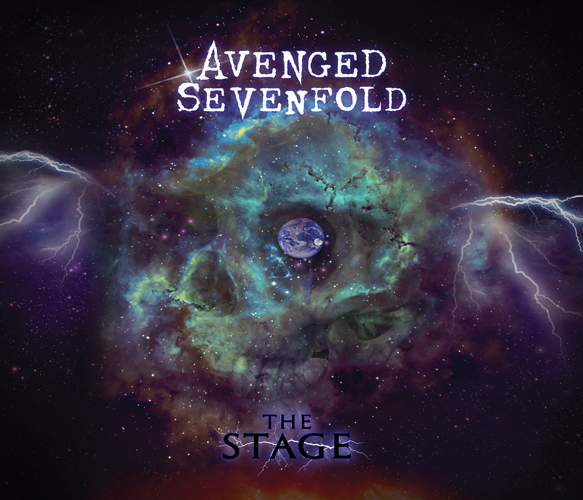