There are bad batches of cookies, of apples, and even beer. What happens to these batches of baddies? They are thrown out, of course – or given to some poor unsuspecting animal to eat. Well, back on July 23, 2017, the distribution company Neon released The Bad Batch to American audiences, showing that not only could food be considered a batch of badness, but so can people.

Right from the very beginning credits, a dark and bleak tone is set for the movie. There is an incoherent radio recording of a voice explaining people deemed unworthy will be considered part of the Bad Batch. Numbers are placed on the heads of the banished; and through well-protected fence the person is put, where beyond lay a desert of nothing. 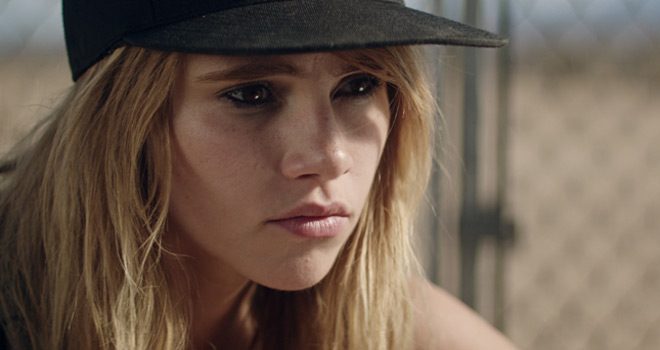 Multiple award-winning Writer and Director Ana Lily Amirpour is behind The Bad Batch. Only her second full-length feature, she is also the genius behind the highly-original 2014 vampire film A Girl Walks Home Alone At Night. With The Bad Batch, Amirpour mixes Action, Drama, and possibly a touch of Sci-Fi. However, do not under any circumstance believe that there is any bit of Romance in this film whatsoever.

With all that out of the way, the first on-screen character introduced to the audience is Arlen (Suki Waterhouse: Pusher 2012 Love, Rosie 2014), a rebellious teenage girl who is tagged, then thrown out into the desolate hot desert to live her life. Well, things are not as peachy as Arlen had hoped, for she is captured, thrown into a golf cart, and driven to some town. She awakes bound and chained to the ground, and soon loses an arm and a leg, which are fed to a group of hungry body-builders—yes, “body-builders”—infesting this place.

After a daring attempt at trying escape from the cannibals, Arlen is too tired and shocked to go any farther. Luckily, a lone, supermarket-cart pushing Hermit transports her to a much nicer town called Comfort. Helping to keep this town afloat is its leader The Dream (Keanu Reeves: The Devil’s Advocate 1997, The Matrix 1999), who is surrounded by gun-totin’ pregnant women. Being in the town of Comfort has helped Arlen to mend and heal—so much, in fact, she is fitted with a prosthetic leg brace. How nice of them. 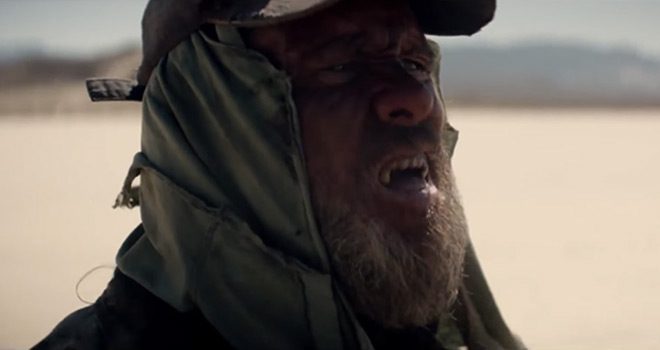 Arlen decides to take a stroll in the desert off premises, spotting a woman and a little girl rummaging through a pile of garbage. Arlen realizes this woman is one of the cannibals. Out of revenge, Arlen kills her, then takes the little girl back to the town of Comfort. What Arlen does not realize is that Miami Man (Jason Momoa: Pipeline 2007, Debug 2014), one of the muscly cannibals, is now looking for this title girl—his daughter.

What Amirpour has done, much like her aforementioned début film, is create a universe of amazingly interesting characters, leaving the viewer to constantly think about them long after The Bad Batch has ended. Momoa‘s Miami Man is probably the most interesting character this movie has to offer. Even though he comes from the “bad” side of the desert, Miami Man stops at nothing to find his daughter, and proves he does have a heart. Momoa shows the many great acting skills he has to offer, making them look so damn effortless.

Another interesting character is the mysterious Hermit character, played by Jim Carrey (Dumb and Dumber 1994, The Truman Show 1998). Not one word is uttered from this desert-roaming person, but he is responsible for a lot of the movie’s happenings. This actor’s movements and facial expressions are far more powerful than any of the other actors combined. When this actor is portraying the Hermit, he demands all the attention. It is a sight to see every time, and will be the talk among fans for years to come. 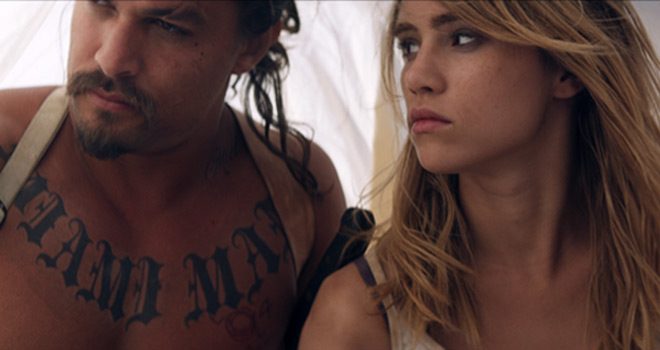 Unfortunately, though, The Bad Batch suffers from many loopholes, and over-length. As for the latter, this film could have been summed-up in a mere 80 minutes. At times it will feel like being dragged slowly over hot sand, only to be left out in the dark and cold of the desert wondering the true point of the film. Also, there is a point in The Bad Batch where Arlen threatens the life of The Dream, and everyone in Comfort, causing an eyebrow to lift, a finger to shake, and the feeling to get up to turn off the film, uncaring of the turn out.

Simply put, there is no rooting for Arlen, who seems quite worthy of all the crap she has been handed. The ending scene will cause wonderment thinking back to all the happenings that had occurred to each of the characters. Is there a message here? Maybe. Is there a reason for all the bullarky Amirpour put the viewer through to get to the finale? Perhaps. Do the characters stick with the viewer? Indeed. Overall, Miami Man, The Dream, and The Hermit are the only redeemable characters in this film. This in mind, for a decent sophomore attempt by Ana Lily Amirpour, CrypticRock gives The Bad Batch 2.5 out of 5 stars. 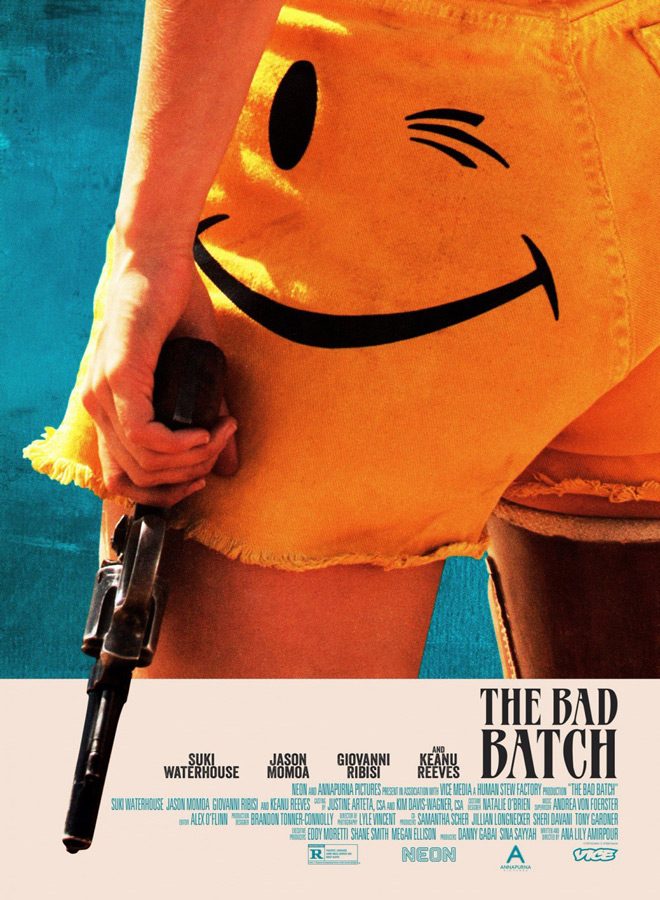