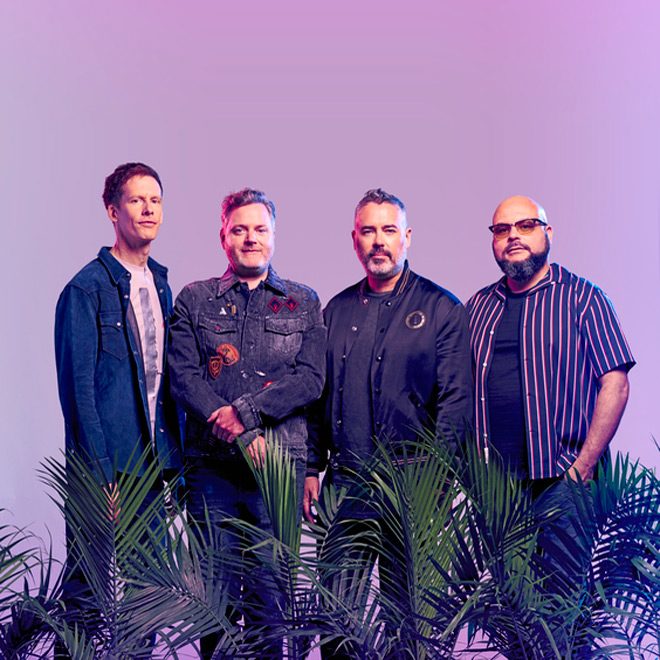 We live in a time of fake news, handsy Hollyweirdos, and now, phony exposures of the musical kind. Just seven months since their last collaborative release with The Persuasions, on Friday, November 17th, thanks to Vanguard Records, Barenaked Ladies return with the winner of Best Album Title of the Year, ahem, Fake Nudes.

Canadian Rockers Barenaked Ladies are known for their hilarious sonic antics and joyously fun, improvisational live shows. Formed in 1988 in Scarborough, Ontario, their self-titled debut cassette (remember those, kids?) would become the first independent release to be certified Gold in their native Canada. That segued the band beautifully into a record deal and the release of their major label debut, Gordon, in 1992. What followed is a lengthy career that is currently twenty-five years strong, producing fifteen albums – from 1994’s Maybe You Should Drive to 2015’s Silverball – that have sold some fifteen-million records, seen a lot of faces, and rocked ‘em all!

Barenaked Ladies – the multi-talented Ed Robertson, Tyler Stewart, Kevin Hearn, and Jim Creeggan – are now ready to expose you to their twelfth studio offering, the fourteen-track Fake Nudes. Produced by Gavin Brown (Three Days Grace, The Tragically Hip), the album is exactly what fans have come to know and love from these wacky Canadians: upbeat, infectious humor swimming alongside bittersweet ballads, always with gorgeous, organic harmonies that permeate the heart of everything they touch. It’s aboot time for some new material, eh?

Fake Nudes begins with a sip of “Canada Dry.” “You’re leavin’ me high and Canada dry” is the catchy, key line to the acoustic, gentle-sway of the album’s opener, an infectious little number that is the perfect representation of why Barenaked Ladies are always at the top of any game they play. It segues flawlessly into upbeat “Bringing It Home,” a fun little ditty that celebrates the mistakes we make along the way to finding our own directions in life. Meanwhile, bass-anchored “Invisible Fence” splendidly portrays those signature Barenaked Ladies’ delicious harmonies and glorious sense of humor.

They blend some electronic beats into “Lookin’ Up,” creating a fresh little spin to the characteristic Barenaked Ladies’ sound that is infectiously upbeat despite being voted Least Likely to Succeed. (Those are lyric references, folks!) “Sometimes the things we love so much just eat us up from the outside in” is the central thesis for the bittersweet ballad “Sunshine,” while needing to escape “Dusty Rooms” pays a gentle Folk homage to Mr. T, pitying the fool, and wasting time in dirty, old spaces. It’s not necessarily a coherent story, but damn it is infectious fun! Gentle rocker “We Took the Night” gets those toes tapping to something that feels instantly classic, while the electronic beats that anchor “Navigate” operate like a metronome, keeping the pace for a dreamy exploration of the stars.

“Flying Dreams” continues the group’s lofty exploits with an angelic kiss of classic Folk that sounds like a magical daydream, a whimsically soaring dream; a fantastic modern lullaby. Midtempo melodic “Nobody Better” is typical Barenaked Ladies’ fare, though the sassy stomp of “Bag of Bones” switches things up a bit while faithfully maintaining those stellar group vocals and that always present glorious wit. Comically, MacGuyver gets his own verb in “You and Me,” a magnificently funky celebration of finding your partner-in-crime. Meanwhile, rustic groover “20/20 Hindsight” celebrates the phenomenon of clarity with time. For the album’s closer, they return to their gentle, folky melodies on “The Township of King,” where the spring peepers chirp along to what sounds like a gorgeous Irish fairy tale.

What is so refreshingly sincere about Barenaked Ladies is that you can never quite pin these guys down: one minute they are all acoustic melodies, next they are tossing gentle electronic beats into the mix and crafting modern lullabies while singing about MacGyver and Mr. T. This unpredictability is uncommon in music today and is a clear example of why the band is so very beloved by so very many fans.

From start to finish, Barenaked Ladies have crafted yet another eclectic collection that runs the gamut from Folk to Rock, gentle hip sashays to groovy toe-tappers. Their melodies are impeccable, the stories are heartwarmingly amusing, and there is always a superb musicianship that anchors every single thing that these guys do – even when it is creating Fake Nudes. Winner of Best Album Title of 2017, CrypticRock give Barenaked Ladies’ Fake Nudes 4 of 5 stars.