Chosen as one of the “21 Horror Movies That Will Make You Scream in 2017,” Breaking Glass Pictures, in conjunction with High Octane Pictures, explore a cellar from Hell in The Basement, a new Supernatural Horror flick that arrived to DVD/VOD on September 5, 2017.

Támás or Tommy (Gergo Szekér is his acting debut) and his girlfriend Suzie (Caroline Boulton: Houdini series, Doctor Who series) are in the midst of preparations for an end-of-semester party for the international university students at their apartment building in gorgeous Budapest. Despite being forewarned by the building’s ominous and rather impatient supervisor Kranicz (Richard Rifkin: The Doors 1991, The Martian 2015), the pair proceed with the shindig and mayhem does, in fact, ensue. Complete with a DJ, people in masks and bunny ears, a few topless chicks, and even a game of baseball that includes a purple dildo as a bat, this is one serious rager. Of course, said party is quickly shut down when the police receive an anonymous complaint and Tommy is forced to send everyone home, plastic phalluses and all.

With the bulk of the guests gone and the apartment in shambles, all that remain are Tommy and Suzie; some very inebriated dude in a horse mask (Shawn Michael Clankie: Taroki short 2016, A Guidebook to Killing Your Ex 2016); young couple Woo-Jin (Tom Nguyen: The Martian 2015, Mars series) and Ayame (Sherin Bors: Tutku short 2015); as well as Hungary’s answer to Seth Rogen, Kolos (Takács Zalán: The Martian 2015, Spy 2015). As the six friends sit around, bored from lack of activities, mystical-thinking Suzie quickly suggests that they partake in their very own séance.

As these things usually go, the séance ends in shambles (literally!), with broken pottery, a missing cat, bizarre noises, shaking doors, and a horse-masked dude wandering off into the sunset. When the rag-tag quintet of students wanders into the building’s courtyard at 3AM, they find the basement door mysteriously unchained and standing wide open. Of course, any sane student of Horror would avoid that basement like the Bubonic Plague, but there is a hearty meow from Suzie’s missing cat that sends the group dashing downstairs.

Once inside, the group discover a dark and gloomy warren of vaults that is more maze-like than it initially appears. With noises and dust at every turn, they follow the sounds of the cat’s meows and first discover the infamous horse mask covered in blood. Shortly thereafter, they discover their missing compatriot with a serious gash to the abdomen and blood everywhere. The situation quickly escalates further out-of-control when a bizarrely-masked young woman (Marina Gera: Free Fall 2014, White God 2014) appears from a pile of mannequins to taunt and terrorize the group of friends. Discovering that they are in fact trapped in this massive basement and that there is something very much determined to end their lives, the quintet will be forced to wander the warren in search of a way out, as well as the answer to what is haunting them at every turn.

Clocking in at 82 minutes, The Basement was co-directed by László Illés (Chumba Wumba 2005, Talent: A Sikercsapat 2014) and Vozo Zoltán Végh (Zsaruk series, Magánnyomozók series), and was written by Illés and Gera Laszlo Krisztian (Talent: A Sikercsapat 2014). The film also stars Varga Csenge Boglárka in her acting debut, as well as Zoltán Füle (Dear Elza! 2014, Zero 2015) and Zsolt Páll (Katalin Varga 2009, Inferno 2016). Please note that while the bulk of the film is in English, there are a smattering of subtitles here – nothing that should scare anyone off, however.

The Basement is an excellent entry into the Horror genre, with suggestions towards the Supernatural, Black Magic, devil worship, and all those holly-jolly accoutrements. Illés and Krisztian do a superb job with their script, understanding well what scares an audience; and for many of us, dank, gloomy, crumbling basements full of baby-dolls and mannequins do the trick beautifully (or horrifically, if you will). With quite a few jump-scares and a delayed explanation for the mayhem, The Basement really is a spook-tastic film to experience. While there are some clichés baked in (a séance being the obvious), this film easily overcomes any short-falls to deliver an experience that is both enjoyable and somewhat unique.

The overall vibe of The Basement is similar to films like 2004’s Saw: dark and moody, with bizarrely-masked characters and blood at every turn. This film is not, however, a psychological game, instead it traffics in the fear of what we cannot immediately discern. Mixing in a pentagram here and a Leviathan cross there, an ominously dark vibe is set that carries our cast through the maze-like vaults of its title. The ensemble cast do a good job of portraying their varying characters and the chaotic horrors about them, none of them over-acting or taking the situation to ridiculously comedic levels. Boulton is a particular stand-out, her emphatic leadership of the group often propelling the plot forward, leading the viewer into their own meanderings of deduction.

While the blood is often a bit discolored and its consistency is not always spot-on, viewers will be willing to forgive these shortcomings in favor of the unique plot and the solid jump-scares that are peppered throughout the film. Brownie points must also be given for a garroting via Christmas lights! The Basement is a solid Horror offering that might not scare you witless, but it will certainly make you think twice before running down to the cellar to find those canned tomatoes (or the missing cat!). For offering a horrifying experience in 2017 that is finally worth noting, CrypticRock give The Basement 4 of 5 stars. 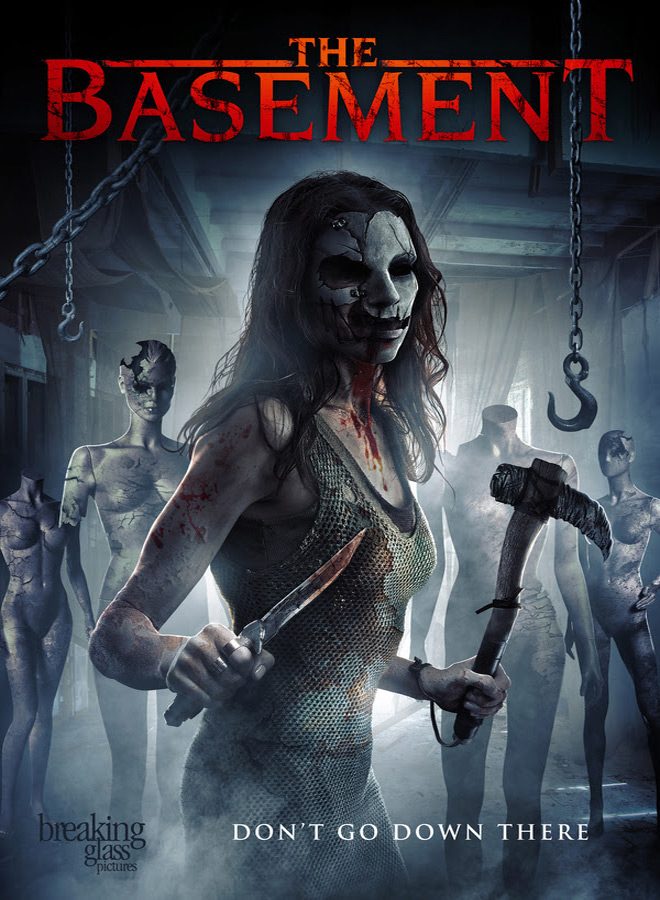