Starting out with nothing but a little piano and a laptop in their bedroom, four friends from the UK began their musical journey back in 2010. With little to no knowledge that one day their efforts would allow them to captain their own North American tour, three years later the band known as Bastille embarked on yet another voyage on their Wild, Wild World Tour.

Now a well-known act, Vocalist Dan Smith, Bassist Kyle Simmons, Guitarist Will Farquarson, and Drummer Chris “Woody” Wood made waves back in 2013 upon the release of their ever-recognizable Indie Pop ballad “Pompeii,” off the debut album Bad Blood. Now with nearly eight million records sold and two records deep, on the most recent, 2016’s Wild World, the quartet have put a lot of mental energy in how to give the audience a better version of themselves. In fact, Bastille are so dedicated to being their best, they want to present their work so their songs were not just heard at each live event, but felt as well.

An extension of 2016’s run, the 2017 Wild, Wild World Tour began as a 30-date expedition kicking off back on March 24th. With the North American leg concluding on May 13th, on the night of Tuesday, April 11th, they were ready to turn the heat on the urban heart that is Downtown Phoenix, Arizona. Visiting Comerica Theatre, it is a modestly sized venue designed to fill the need for performers that do not need a huge sports stadium, but are too large for more intimate venues. Seating close to 5,000 people, a mass of fans came out to revel in the experience that is Bastille.

Setting the mood, the opening act of the night was Mondo Cozmo, the performing name of Philly-bred, LA-based Singer-Songwriter Joshua Ostrander. Having fronted Alt-Rock band Laguardia from 2000 to 2005, Ostrander ventured off on his own and started recording under the name Mondo Cozmo. Though he has yet to release an album under the name, his single “Shine” reached #1 on Billboard’s Adult Alternative Song chart in January 2017.

Ready to go, with a Corona by his side and nice dim of red against his face, the singer belted out his sounds to a wide-eyed audience. There was a folky, somewhat psychedelic vibe lingering in the air. Despite the mystique, he had some nicely planted fans in the pit of the venue indulging in original tunes such as “Higher,” “Future Bends,” and “Plastic Soul.” Quite entertaining, many sung and swayed along, especially for the aforementioned “Shine.” Performing for about an hour, the future looks very bright for Mondo Cozmo.

With Mondo Cozmo’s set concluded, fans patiently awaited Bastille, but it was hitting close to nine and the big boys had yet to arrive. Then, at last, the lights softened and the enormous screens of the stage flashed images of a man in a business suit reading the newspaper. These were all visuals that complemented the theme the band is attempting to apprise, which loosely commented on the news media and how the people view the world and politics.

Bastille slammed straight into the song “Send Them Off!” and the crowd went ballistic. Hyped to the core, to follow was “Laura Palmer” as the room began to rumble. Catching their breath, Smith screamed, “Hello! How are you doing? You guys alright?” before apologizing for being late. An afterthought to hungry fans follow the jolting start, the sentiment of the band’s apology was endearing regardless. Then, what looked like the letters that read “Bastille” made out of cardboard, were lit up by a fan in the audience. This caught the attention of the band and Smith pointed it out and said, “This is awesome!” so he took it off the fan’s hands and plopped it onto the stage for everyone to see. Quite shocking, the young fan was ecstatic to make contact with the singer in such a personal way.

Before getting back into the music, Smith shed some light on the impact of the political turmoil that exists, stating, “Our album we made is about how you watch the news in the moment and everything sounds mad, but people are great people.” Poking fun of himself, he admitted it sounded cheesy, they soon ripped into “Snake.” Despite stating they literally just arrived from Texas, Bastille had an incredible energy, the type of energy that plunged right through a crowd and surfed it. At least that is what Smith did when the song “Flaws” began as disgraced personal safety, braving the sea of fans, he jumped right in. 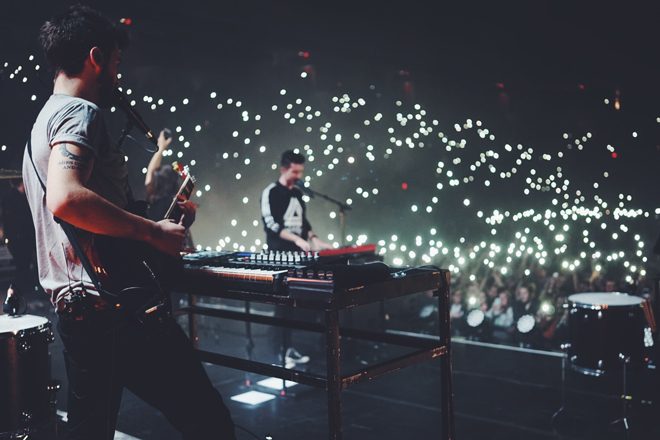 After busting his heart out with all the spirit a body can muster, the atmosphere pacified itself for the song “Oblivion.” It was here Wood dislodged himself from his drum set and encouraged his army of fans to light up their phones like a million little stars in a dark room. The stillness of the energy was then resuscitated when the song “Things We Lost in the Fire” came on, and once again, the crowd went insane.

In regards to Bastille’s music, there is certainly a metamorphosis that hugs gloom even tighter when comparing Bad Blood to Wild World. That in mind, a little more than halfway through the show, Smith leaned in towards the audience stating, “Anyone who has listened to our songs, knows we have a lot of depressing songs. But this song is the most depressing song we have ever made.” Raising curiosity as to which one he was speaking of, the lights then shifted to grey and he belted out “Four Walls.” A track that seems to be about capital punishment, it concluded with an electrifying guitar solo courtesy of Farquarson.

From here, there were more fan-favorites to follow such as “Blame,” “Fake It,” “Glory,” and “Of the Night”  – a mash up of the Corona 1993 hit “The Rhythm of the Night” and the 1992 Snap! hit “Rhythm Is a Dancer.” Conversing with the crowd more, Smith stated the next song would be quite strange, stating it was from a mixed tape they released a few years back. Engaging everyone, he requested they jump up and down together and everyone followed before Smith surprised the room yet again, entertaining the crowd, going all the way to the back of the venue.

About twenty songs in and still going strong, Smith thanked the crowd and said, “It’s my fault for being late. I’m very very sorry. Please be safe! The next song is where we pretend it’s the end, but it’s not. We pretend it’s a happy song, but it’s incredibly depressing.” The song he was playfully talking about was “Good Grief,” which would be the ‘pretend ending’ of the show. Disappearing from the stage, Bastille returned wholeheartedly with the song “Two Evils” as Smith hung off of the balcony like a ventriloquist puppet from the highest point of the venue, yet he was the master of the entire stage. Continuing the encore with “Icarus,” they showed no sign of fatigue as they busted out into the adored “Pompeii” as their true finale.

One thing about Bastille that made them quite the special act was the way they devoured the stage. They made sure they were seen by their beloved fans from every angle possible. From the crowd-surfing, gift-snatching, balcony hanging, they were not at all bashful to play with the space at Comerica Theater. Despite being late and making a joke that their lack of punctuality was “the most Rock star thing they have ever done” the four friends from humble beginnings had the rock star energy people happily and willingly pay for. All this said, if the Wild, Wild World Tour teaches us anything it is that Bastille is fully capable of captaining their own ship all through North America until the very end. 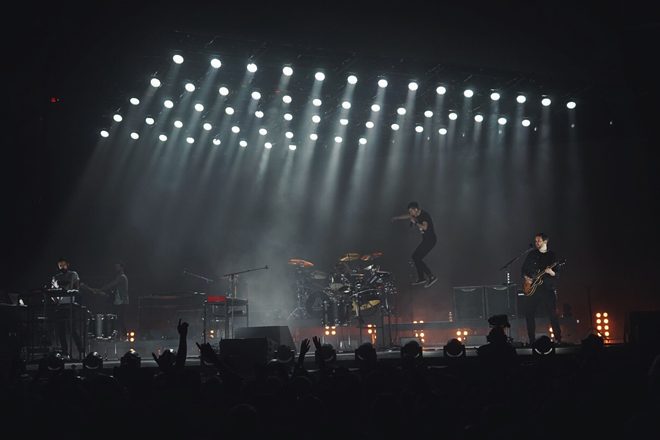