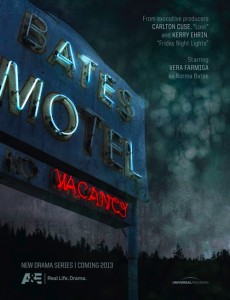 A&E’s new series “Bates Motel” first aired last month on March 18th. Inspired by the classic story of “Psycho” by Robert Bloch and Alfred Hitchcock’s classic 1960 film. Now 3 episodes in with the 4th episode airing tonight (April 8th) at 10 PM. The series focuses on the teenage years of Norman Bates and his not so normal life. In the pilot episode we are giving a glimpse of how Norman and his mother Norma Bates end up purchasing a motel in a small town along the coast of Oregon. The previous motel owner is not at all pleased that the Bates have purchased his family run motel from bank foreclosure. This leads to a horrific event between Norma Bates and the disgruntle previous motel owner. The story develops at a good pace from here leaving the viewer intrigued. You are drawn in to the interesting dynamic between Norman and his mother Norma Bates. This is clearly not a normal mother and son relationship and the series is very effective at showing this in a subtle matter. A few secondary characters play into the story such as local town police, Norman’s brother, and a few girls from school which fancy Norman. The classic story of Norman Bates is set in modern times and appears to be translated very well by the writers. At the current point in the series all the characters involved are very likeable and engaging. There is definitely more than meets the eye between Norman and Norma Bates. The series is just starting to scratch the surface of the formation of a psycho. With strong plot, acting, dialogue, and character development “Bates Motel” is sure to intrigue many horror fans. We highly recommend that fans of the original classic “Psycho” check out this engrossing series. At this point in the series CrypticRock give this 4 out of 5 stars.

Like the in-depth, diverse coverage of Cryptic Rock? Help us in support to keep the magazine going strong for years to come with a small donation.
Print page
1 Like