When a certain film franchise has so many individual films to offer, one may get easily lost in the mix. Individual films may cease to stand out, or perhaps the franchise may drag on for much longer than even fans would have liked. This, however, is not the case for the overarching Batman film franchise, which has maintained strength since its conception in 1966 with Batman: The Movie (of course, based off of the infamously corny yet loveable television show). Spanning a multitude of directors, portrayals, and even origin stories, the Batman universe has become synonymous with the modern superhero – and it might just be because of 1992’s Batman Returns. 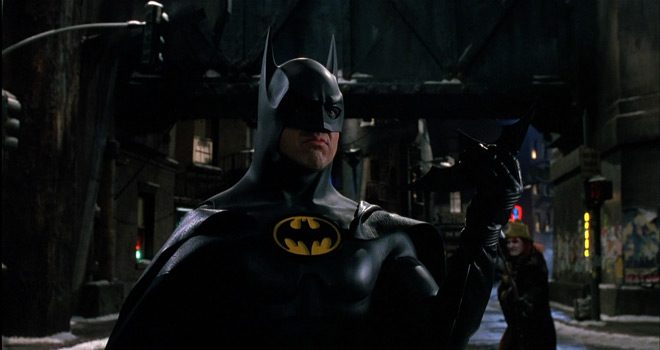 Originally hitting theaters on June 16th of 1992, Batman Returns blends a perfect amount of original 1960s fun and energy with the dark, modern Christopher Nolan style in 2005’s Batman Begins, 2008’s The Dark Knight, 2012’s The Dark Knight Rises. The film was, stylistically, drastically different than any other superhero film made before its release. It was dark, gritty, unapologetically fun and yet still grappled with several adult themes which, somehow, still earned the film a PG rating from the MPAA. The monochromatic backdrop of Gotham City served as its own auspicious character, not unlike the Gotham portrayed in the source material.

Unlike in the first movie in the series, 1989’s Batman, Director Tim Burton (Beetlejuice 1988, Edward Scissorhands 1990) was able to indulge his love for the artistic stylings of 1920s German Cinema to create a whimsically comical yet gloomy atmosphere.

The cinematography of Stefan Czapsky (Batman 1989, Ed Wood 1994) is, at times, absolutely stunning. For example, take Selina Kyle’s apartment scene, or the hauntingly beautiful opening frames. Burton truly takes viewers to a twisted fantasy world where reality is slightly warped, and it fully works. With both ambiance and physical setting, the director cleverly veers away from the original content just enough to give audiences a breath of fresh air, yet remained close enough to retain a sense of familiarity with the characters.

As for the cast, returning as Bruce Wayne/Batman for the second time was Michael Keaton (Beetljuice 1988, Birdman 2014) , yet again, doing an exceptional job of keeping the character balanced between humor and a more serious tone. Then there were the villains, and what villains they were. There was Danny DeVito (Taxi series, Twins 1988) as Oswald Cobblepot/Penguin, a portrayal that was both dark, yet heartbreaking at the same time. Just the right frame for the character, DeVito’s Penguin was evil but also sympathetic. 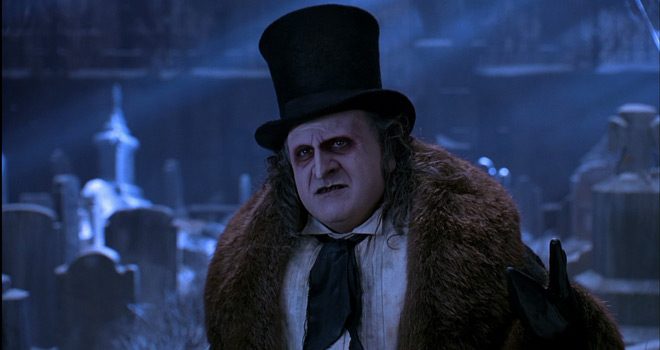 Joining up with him was Michelle Pfeiffer (Scarface 1983, Wolf 1994) as Selina Kyle/Catwoman, and in many ways, her performance was groundbreaking as a female role in a superhero flick. While other Catwomen previously graced the screen, Pfeiffer played a complex, vivid, and three-dimensional character that was not all about appealing to the audience. This take on Catwoman challenged the men around her, explored the perceived duality of roles of women in society and was fully in control of her image. That said, her version of the character absolutely paved the way for the modern-day villainess sensation Harley Quinn.

Speaking of which, if it were not for Batman Returns, there would not have been a Harley Quinn at all; the overwhelming box office success of the film launched the start of Batman: The Animated Series, which introduced the clown princess of crime. Now, Harley Quinn is one of the most beloved (and profitable) DC women of all-time.

However, not all hail this stark blockbuster as a cinematic gem – fans and film critics alike are still immensely divided on the success – or failure – the movie brought. After all, while the original Batman brought in an astonishing $411 million at the box office in 1989, Batman Returns only totaled $267 million by comparison. Perhaps it was the timing, seeing Batman came during the end of the ’80s and fans were quite hungry for the feature film. Three years later, the dawn of a new decade, the commercial of Batman Returns appeal seemed to be weaker as well as merchandise sales seemed to come to a halt, and even fan excitement seemed to hinder. 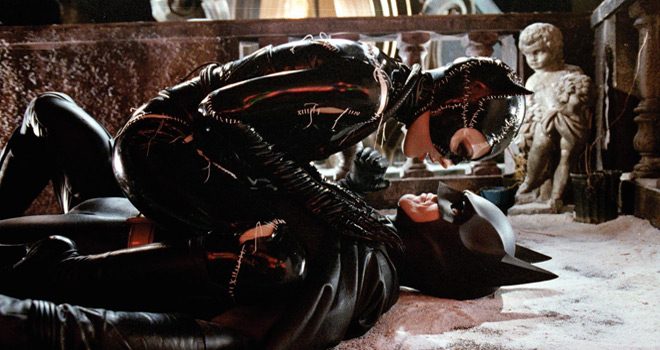 Financial disappointment is not all that Batman Returns had going against itself – parents of young moviegoers famously complained of the sexual implications and blatant violence that the caped crusader ensued personally (see: when Batman burns one man alive, the other being blown up). That is not even mentioning the highly anti-semitic caricatures that the depiction of the Penguin took inspiration from. To make matters worse, the very depictions of Batman and the Penguin were put into question, a debate that has not ceased since.

As for the actual story, it seems like a hurried mess of poorly strung-together ideas. Its few themes are done to death (you never want to hear the words “animal totems” again after viewing). The action scenes are poorly choreographed and even more poorly shot. The world, at points, teeter-totters from fantasy world to an angsty teen’s notebook drawing. However, the weakest point of the film is its portrayal of Batman, who seems unamused and willing to grin while slaughtering enemies – an act which is exactly what he condemns.

All these factors lead to Batman Returns being the last film in the Warner Bros. Batman film series that featured Burton as director and Michael Keaton as leading actor. Moving forward, Warner Bros. decided to go in a “lighter” direction to be more mainstream in the process of a family film in 1995’s Batman Forever. However, with the success of Batman Returns, a Catwoman spin-off was announced in June of 1993. Michelle Pfeiffer was to reprise her role, with the character not to appear in Batman Forever due to the production of the spin-off. The film labored in development for years, with Pfeiffer replaced by Ashley Judd. Sadly, the film ended up becoming the critically loathed 2004’s hot mess Catwoman starring Halle Berry. 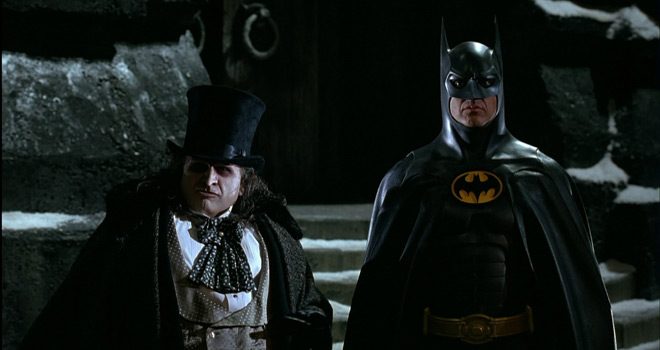 Twenty-five years after its release, Batman Returns is still shown at cult screenings and revered as a perfectly imperfect cinematic diamond in the rough. It’s psychologically complex characters and looming atmosphere planted the seeds for Christopher Nolan and reached out to further territories later in the DCEU (see: the dark and light juxtaposition in Suicide Squad). The film launched the Batman universe into continued success – and allowed the caped crusader to truly return, again and again. 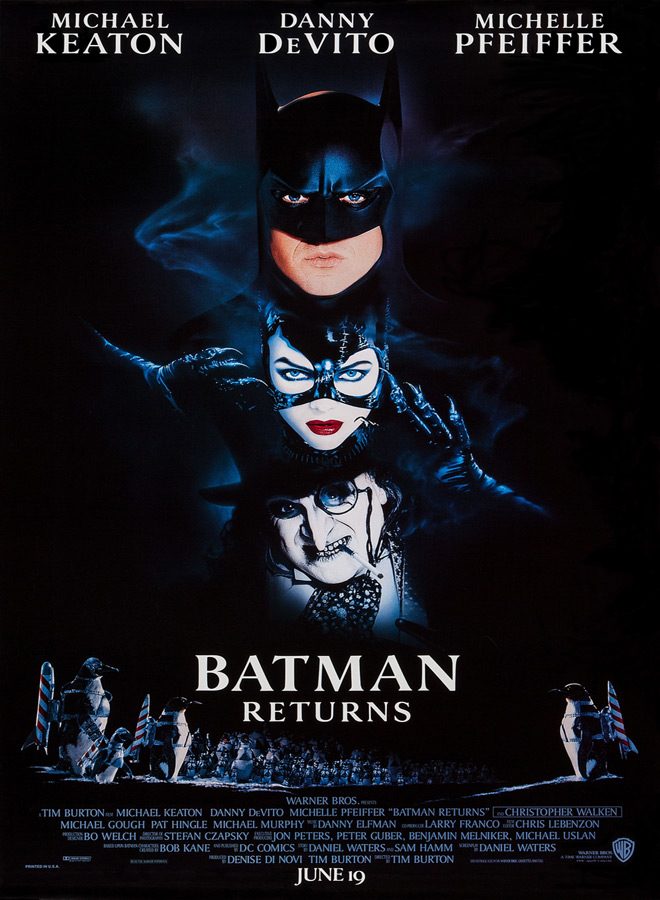