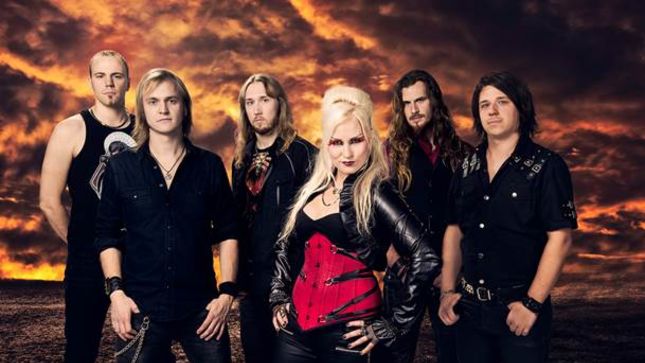 Founded in 2008, the Helsinki, Finland, Heavy Metal band Battle Beast have released their third studio album, Unholy Savior on January 9, 2015. Battle Beast is not only the name of the band, it is also the name of their musical Metal style. Releasing their debut album Steel in 2011 via Hype Records, a worldwide record deal was signed Nuclear Blast after they won the 2010 Wacken Open Air Metal Battle. Excited for the endless possibilities, in September 2012 the band sustained a blow when vocalist Nitte Valo left for personal reasons, but vowed to triumph on, replacing her with strong-voiced Noora Louhimo. In addition to Louhimo, the band consists of Anton Kabanen on lead guitar and vocals, Juuso Soinio on rhythm guitar, Janne Björkroth on keyboards, Eero Sipilä on bass, and Pyry Vikki on drums. A sophomoric, self-titled album was released in 2013 and was followed by a big European tour alongside German Metal band, Powerwolf, and also the big festival, Loud Park, in Japan.  Two years later, the story behind their third album, Unholy Savior, is quite interesting. The main composer and guitarist, Kabanen, says, “The album had to be done this way – through emotional hell. Having transferred these “things” and emotions into songs I feel that I’m ready to move on.  But like always, I wrote songs about the series “Berserk”, as well, and the reason behind writing songs about that particular series is that I can strongly relate to that, especially to certain characters and to their way of thinking and feeling.” Produced by Kabanen and co-produced by bandmate Björkroth, the album was mixed by Matias Kupiainen at 5by5 Studios, and mastered once again done by Mika Jussila at Finnvox Studios.

The songs are energetic and aggressive – like all genuine battle songs are! Unholy Savior begins with full strength, as “Lionheart” is fast and furious, racing like Vin Diesel in a Ferrari. The second song, the albums’ title track, continues with the snappiness of the first song, both energetic and melodic. In the third song, “I Want the World… And Everything In It,” Louhimo screams ultimate, earsplitting war cries. The song “Madness” does not bring any variety to Unholy Savior’s pushy first few tracks, even though it is catchy and aggressive. The fifth song, “Sea of Dreams,” is calm and peaceful, jumping to the other end of the spectrum. The beginning of the song bring to mind Nightwish’s beautiful “Sleeping Sun” (Oceanborn 1998). However, “Sea of Dreams” is a delightful a relief after the full blown war in the beginning of the album. After that momentary breath, “Speed and Danger“ returns the listener back to the rough, Power Metal world. “Touch in The Night” has a bit of ’80s in it, as the rhythm and keyboards take you back to the discotheque, but it still stays loyal to the Metal sound as well. “The Black Swordsman“ only lasts a minute and fifteen seconds, and is another calm, smooth break between the battle cries. “Hero’s Quest“ is an instrumental song with a cheerful and light tone, followed by “Far Far Away,” a tune bursting of energy. The last song, “Angel’s Cry,“ makes for a much needed exhale after those aggressive battle songs. It has a  slow tempo and shows a softer side of Louhimo’s wide spectrum, beautiful voice.

Unholy Savior screams along with rage and a fast tempo, making forty-five minutes feel like fifteen – the sign of a good album. This album does not leave the listener cold, but rather full of a white hot energy, with perfectly timed, slow and beautiful interregnums in the middle of this frenetic war of an album. The last song, “Angel’s Cry,” nicely seals the whole package together. Unholy Savior is one hundred present Battle Beast, and a sign that the band has not only claimed their own style, but has also enhanced it to a higher level. They have also released a video of first single “Madness,” uploaded on YouTube on December 12, 2014 by Nuclear Blast which is worth checking out. CrypticRock gives Unholy Savior 4.5 of 5 stars. 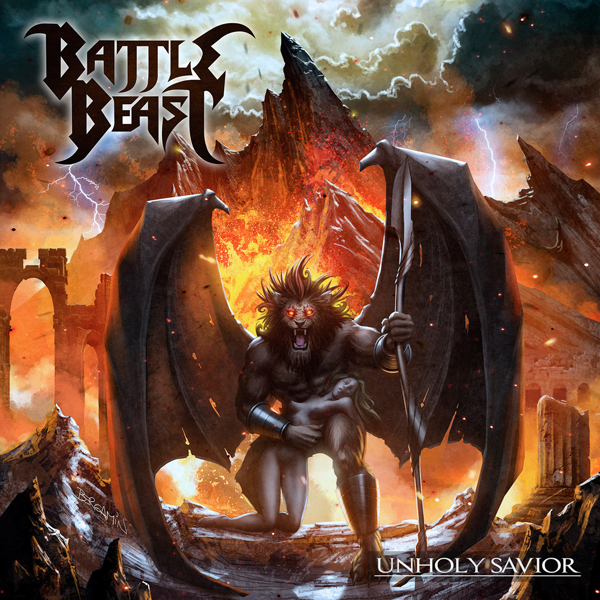