Coming off a three year hiatus, the NYC-based Hip Hop leading Beastie Boys found themselves set to release what was one of the most anticipated album releases of 1992. An incredible musical journey that kicked off back in 1981, 1986 brought them into the mainstream spotlight with their debut album Licensed to Ill. A promising beginning, it would be 1989’s Paul’s Boutique which would mark a groundbreaking step forward for the rowdy punk rockers turned Hip Hop icons.

Having the pressure on them at the dawn of a new decade, critics thought that the Beastie Boys would not be able to re-invent themselves as they had done with the aforementioned Paul’s Boutique. Too bad they should have known the Beasties, better known as Adrock (Adam Horovitz ) Mike D (Michael Diamond) and MCA (Adam Yauch), would drop an album that sound as fresh today as it did when it was released 25 years ago. That all said, with a diverse and free flowing musical landscape, the Beastie Boys released masterpiece known famously as Check Your Head back on April 21st of 1992.

Looking back,  Paul’s Boutique had over 200 sample breaks on it, but the Beastie Boys decided that with Check Your Head they would go back to live instrumentation just as they had done with their earlier Punk days with Young Aborigines. Upon first listen it is easily distinguished that the boys made the right decision to lay down tracks of them playing instruments live and then writing rhymes over those breaks. So let’s take a closer look.

Bringing back Mario Caldato, Jr. into the studio, the album opener, “Jimmy James,” is an example of how the boys were experimenting a bit more with their sounds and the break beats and the scratching on their songs. Vintage Beastie all the way. As the album moves on listeners found themselves with the classic track “Pass the Mic” – a slow rolling, booming bass, cut and scratch song that has the boys rhyming about everything from “taking down MC’s like I’m mowing the lawn” to making sure you “like to feel the bass in your face in the crowd.” Noteworthy to mention, the music video for the song is now considered classic with its unique camera style shots and vintage Beastie dress code.

The song “Finger Licken Good” is a nice break from the ordinary because not only is MCA and Mike D rhyming over the track, Adrock is behind the tables handling the scratching. Then comes what many fans would consider the standout song on Check Your Head, “So What’cha Want.” Only their third single to break into the US Billboard Hot 100, behind 1986’s “Brass Monkey” and 1989’s “Hey Ladies,””So What’cha Want”starts out with an organ break that leads right into a grungy over-driven guitar rhythm that is complimented by funked out drums and a crazy little bass section. In fact any hardcore fan who has read the liner notes for the band’s 1999 greatest hits album Sounds of Silence would know “So What’cha Want” almost did not make the album as it was a last minute newcomer to the project. Arguably, Check Your Head would not be what it is it not for this song.

Further making the album stand out, even some funky instrumentals made their way on with “POW” and “Groove Holmes,” songs which have become staples in the Beastie Boys folklore of great instrumentals. Lastly, The Boys finish off Check Your Head with some very strong songs including “The Maestro,” “Live at P.J.’s,” and “Professor Booty,” all showing that the band was in complete sync with one another. Musically and skill wise it was becoming apparent that they were a well-oiled machine by this point in their career. From “The Maestro’s” fuzzed out lyrics to the live instruments found on “Live at P.J.’s,” these songs allowed the Beastie Boys to finish off Check Your Head in strong fashion. In addition, “Professor Booty” showed the boys great rhyming skills as all three verses show how much they had grown as MCs from their days of spitting beer in fans faces to subliminal disses as mentioned by MCA in on the track.

Recorded at the Beastie Boys own G-Son studios which was located in Atwater Village in California, at the time of recording, the boys were living in California and on a creative high. This soaring level continued as they moved into 1994’s Ill Communication, an album many record as Check Your Head’s sister album. Simply put, Check Your Head to many was the start of Altrock/Rap genre. It had influences that ranged from Punk, as heard on “Time for Living, to funky as heard on “Namaste,” straight onto Hip Hop scratching, break beats, and classic Boom Bap styling.

Check Your Head was a smorgasbord of concepts and is considered to be a sonic musical journey that set the stage for many albums to come thereafter, from the Beastie Boys and their contemporaries. A melting pot of creative genius that only the three beasties could have created at only that moment in time, 25 years later, Check Your Head is Alternative Hip Hop gold. 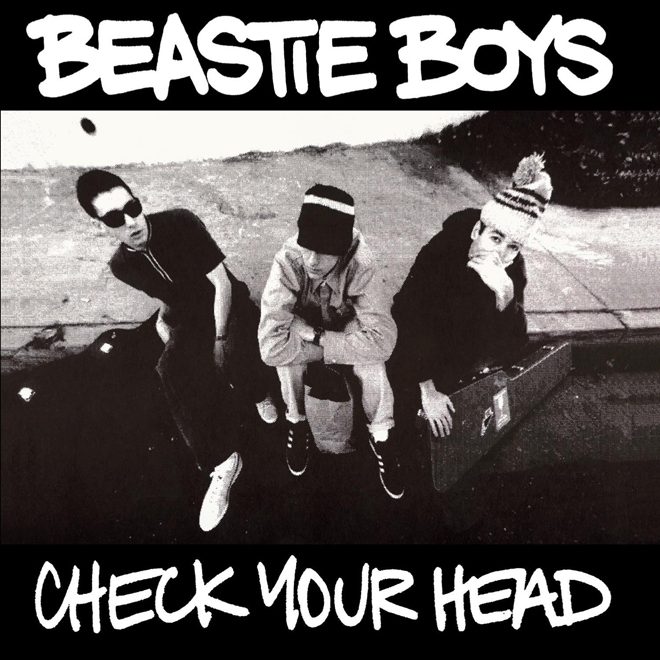