Idle women’s flirtations can mean war, as we quickly learn in The Beguiled. Available on Digital platforms as of September 26th and coming to Blu-ray, DVD, and On Demand on October 10th thanks to Universal Pictures Home Entertainment and Focus Features, this Civil War-era Drama stars an elite cast that includes Nicole Kidman, Kirsten Dunst, and Colin Farrell. Break out the popcorn! 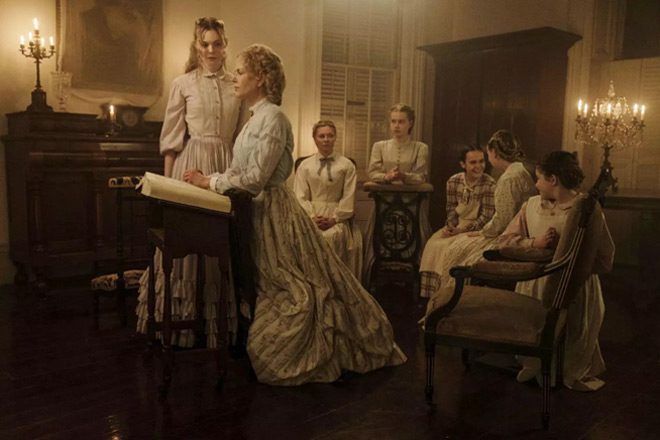 In 1834 Virginia, the War of Northern Aggression has been raging for just three years. Out for a walk and to collect mushrooms, young Amelia (Oona Laurence: Southpaw 2015, Pete’s Dragon 2016) stumbles upon a wounded soldier. Corporal John Patrick McBurney (Colin Farrell: Phone Booth 2002, Total Recall 2012) of the 66th Regiment out of New York lies underneath a large tree, shot in the leg and bleeding heavily. A precocious youngster with a heart of gold, Amelia (affectionately known as Amy) quickly helps Corporal McBurney back to her home, the Miss Farnsworth Seminary for Young Ladies.

The Farnsworth Seminary is currently home to five young ladies, among them Amy; passionate Confederacy supporter Jane (Angourie Rice: Walking With Dinosaurs 2013, Spider-Man: Homecoming 2017); wallflower Emily (Emma Howard: Transparent series, Chasing Shadows series); youngest student Marie (Addison Riecke: The Haunted Hathaways series, The Thundermans series); and eldest Alicia (Elle Fanning: Super 8 2011, Maleficent 2014). In charge of the well-being and education of the girls are both headmistress Miss Martha (Nicole Kidman: Eyes Wide Shut 1999, The Others 2001) and her assistant Edwina (Kirsten Dunst: Interview With the Vampire 1994, Spider-Man 2002). When the ladies opt to take in the unwelcome visitor out of a sense of Christian charity, there will be a great disturbance to their normally quiet lives. 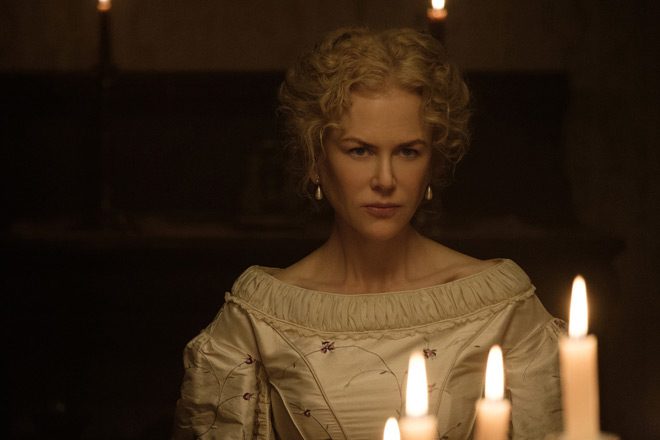 Inside the walled-in Southern mansion, as Corporal McBurney slowly recovers and begins to walk again with the aid of a cane, his presence creates a tidal wave of repercussions for the women. Little Amy – curious about the world around her and with a tremendous sense of empathy – befriends the wounded man that she rescued, while youngsters Emily, Jane and Marie are all equal parts intrigued by his presence and cautious of the stranger from enemy soil. The normally guarded Miss Martha seems piqued, with Edwina tenderly intrigued by the Irish immigrant who is fighting for the Union. For her part, eldest student Alicia – a young woman boldly confident in her burgeoning womanhood – struts like a peacock before the Corporal. As tension mounts inside the Seminary, the ladies will learn a lesson or two about the lengths to which one must leap to stay safe in the face of war.

Based off the novel by Thomas Cullinan, The Beguiled was Directed by Academy Award-winner Sofia Coppola (The Virgin Suicides 1999, Lost In Translation 2003) and written for the screen by Coppola, based off the screenplay by Albert Maltz (The Naked City 1948, Two Mules for Sister Sara 1970) and Irene Kamp (Paris Blues 1961, The Beguiled 1971). Clocking in at 93 minutes, The Beguiled is an intriguing mix of both history and dark, brooding drama, with only the very slightest twinges of romance.

This is a film that moves at a steady clip and yet has no major action, adventure, or gory turmoil; instead, viewers should expect tons of drama set in the 1800s South; and while, yes, the catalyst for our story is a soldier and while the war is ever-present in the backdrop, this is not a war film. This is the story of one man whose circumstances bring him into the home of seven women, his presence setting off a war in its own right inside the walls of the girls’ seminary. The ensemble cast do a beautiful job of relaying the intense yet delicate story-line, with standouts being the adorable Oona Laurence (as Amy), precious little Addison Riecke (as Marie), beautiful Elle Fanning (as Alicia), and always stellar Kirsten Dunst as the highly-conflicted Edwina. 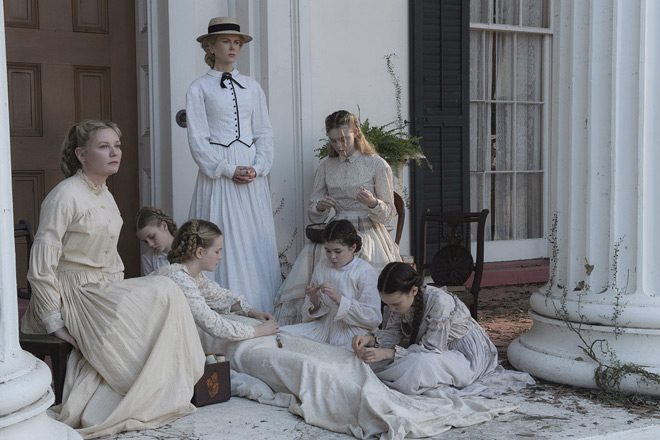 The Beguiled is a beautifully done film that traffics in high drama, historical fiction, and gorgeous cinematography. Like a photographer’s dream, each shot is framed to perfection with a stellar attention to detail in the costuming, sets, and props. With excellent acting and a wonderful soundtrack by the band Phoenix, this is a film that is haunting, somewhat confounding, and will stay with its viewers long afterward. Magnificently done and enjoyable to watch, CrypticRock give The Beguiled 4 of 5 stars. 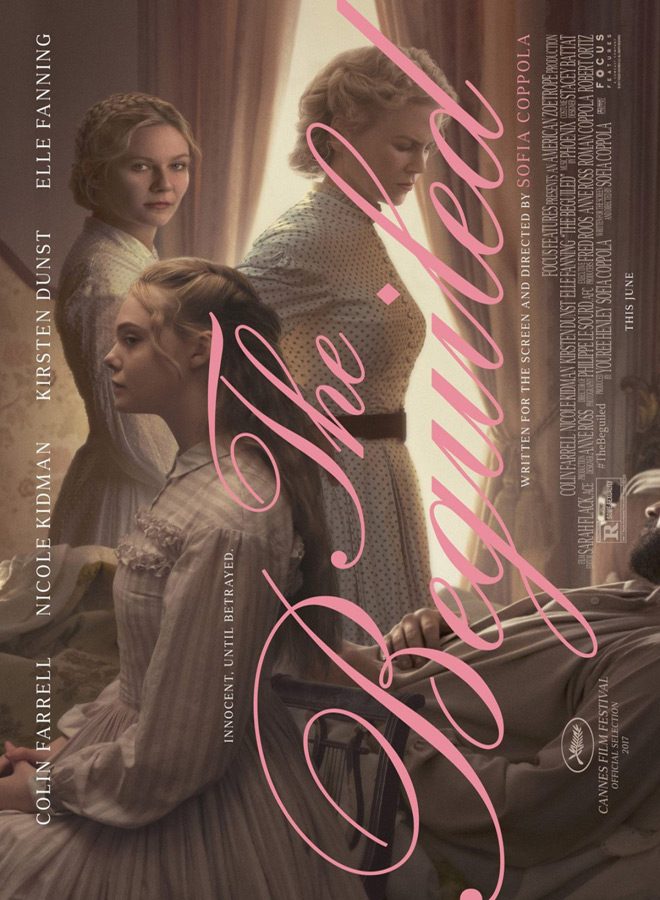