Behemoth is proud to announce that they will be returning to North America this Spring as part of the Metal Alliance Tour 2014! This will be the band’s first North American tour in support of their new album, “The Satanist.” Joining Behemoth on this tour will be Metal Blade label mates, Goatwhore, along with additional support from 1349, Inquisition, and Black Crown Initiate. The Metal Alliance tour will begin April 4th in Tempe, AZ and runs through May 3rd.

Behemoth front man, Nergal, articulates the band’s excitement: “We are immensely proud to be headlining Metal Alliance tour in North America. It’s a privilege and we’re going to make sure that with this tour and “The Satanist” that Behemoth is making an ultimate statement! It has been a long trek from when we landed in US for the first time in 2003. It took us a decade to get to this place we are now. We are coming back, more determined and hungrier than ever, ready to reclaim the throne!”

Behemoth has posted a brand new behind the scenes video for “The Satanist.” This video is the first in a series of four that chronicles a selection of the creative and technical processes behind the album that Albert Mudrian of Decibel Magazine heralds as “simply the best Behemoth record ever.” Watch the making of video now at metalblade.com/behemoth, where pre-order bundles for “The Satanist” are also available.

“The Satanist” pre-order bundles include: CD, LP, t-shirt, as well as the deluxe box set. The European import deluxe box includes: CD/DVD digibook in silver mirror slipcase with a high quality 44 page booklet (with gold foil, UV gloss lamination), supersize poster flag (approx. 3.5′ x 5′), wooden black inverted rosary cross, metal pin, black envelope with black communion wafers. The DVD, “Live Barbarossa,” includes a professionally filmed show in Ekaterinburg, Russia, as well as 30 min documentary about the creative process behind “The Satanist.” Order now at: metalblade.com/behemoth in North America, nuclearblast.de/behemoth in Europe, and on behemoth-store.com (digibook and box). “The Satanist” will be unleashed on February 3rd in the UK, February 4th in North America and Poland, February 5th in Japan, and February 7th in Europe and the rest of the world.

“The Satanist” was produced by Behemoth, Wojtek and Slawek Wieslawscy and Daniel Bergstrand in Hertz Studio. The album was mixed by Matt Hyde (Slayer) and mastered by Ted Jensen (Metallica, AC/DC) at Sterling Sound. The cover art for “The Satanist” was painted by renowned Russian painter and occultist, Denis Forkas (denisforkas.com). The paint used included some of Nergal’s own blood! Additional art and design was completed by Metastazis (Paradise Lost, etc.) and Zbigniew Bielak (Watain, Ghost). 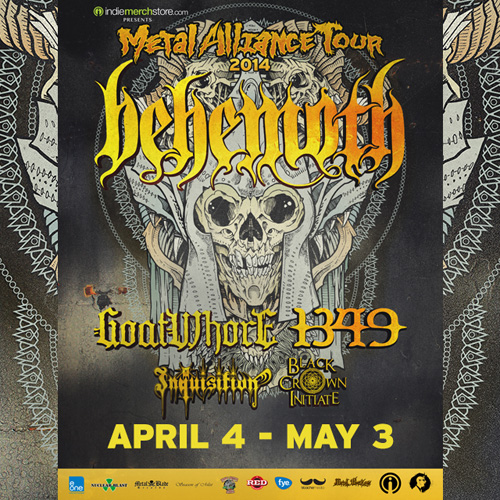