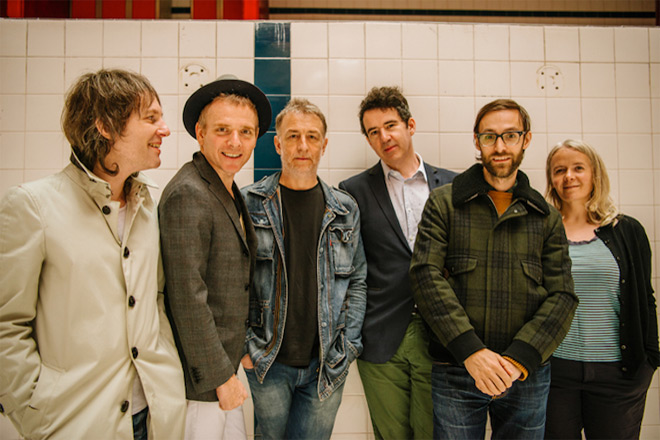 The Scottish group Belle and Sebastian are back with Days of the Bagnold Summer on Friday, September 13th through Matador Records.

Their tenth overall LP, helmed by the steadfast Stuart Murdoch, Days of the Bagnold Summer serves as the soundtrack to the film of the same name, directed by Simon Bird and based on a graphic novel by Joff Winterhart. The title character, Daniel Bagnold, is a fervent Heavy Metal fan, and the story follows him and his divorced librarian mother as the pair spend a summer holiday surviving each other’s company.

All this in mind, the band has previous soundtrack in their discography such as 2002’s Storytelling, which was recorded for Todd Solondz to use in his film of the same name. Due to confusion and miscommunication, barely six of the album’s thirty-four minutes made an appearance in the film. In more recent output, the band has recorded three EPs in as many years, How to Solve Our Human Problems parts one through three, leaving 2015’s Girls in Peacetime Want to Dance as their most recent full-length.

Complete with thirteen songs, a smattering of instrumentals pepper the album, starting with opener “Sister Buddha” and bookended by closer “We Were Never Glorious,” along with “Jill Pole,” likely named after the character from The Chronicles of Narnia, and “The Colour’s Gonna Run” changing the pace elsewhere. These tracks can be imagined as colorful background music for various scenes throughout the film, particularly the final track, which features a bit of dialogue from the film.

Additionally, Days of the Bagnold Summer also makes use of a few re-recorded songs. The first to appear is “I Know Where The Summer Goes,” which was originally featured on the 1998 EP This Is Just a Modern Rock Song. Within that first edition, the organ has a shallow, tinny sound, and, as with most Belle and Sebastian fare, the quiet vocals can still be heard distinctly over the din of the surrounding instruments. Here, the fresh recording has a much richer backing sound, and the vocals struggle to find the same level of importance. This is a recurrent theme in the album, whereby the familiar vocals of Stuart Murdoch are somehow mixed to a lower level than in past efforts.

After “I’ll Keep It Inside,” a soft, quiet interlude with the vocals at the forefront, comes “Safety Valve.”  The track predates the band itself, and not having appeared in proper recorded form, it has a deeper throwback sound. Wrapping the past tunes is “Get Me Away From Here I’m Dying”, which originally appeared on 1996’s If You’re Feeling Sinister. Murdoch sounds a little tired here compared to the original—though twenty have admittedly passed—and has trouble hitting the full range of notes from the original; perhaps more telling, he sounds as if he is making little effort to even do so.

In terms of fully formed, vocal-laden new fare, the album is a bit lacking. Although, “Another Day, Another Night” is a quick, strong tune that features female lead vocals. Then “Sister Buddha,” while a jaunty, well-paced track, is still too busy to keep the vocals of Murdoch close enough to the forefront. Contrasting with lighter fare, “Wait And See What The Day Holds” or “This Letter,” keep the instrumentation minimal while attempting to keep the vocals loud enough.

Perhaps having the idea of a movie soundtrack leads to a disjointed feeling in these tracks, as they may be meant to paint different moods or emotions. Taken on their face, the songs have promise, but often fall flat in terms of execution, and the reliance on older tracks without much improvement leave a few holes in the progression. For these reasons, Cryptic Rock gives Days of Bagnold Summer 3 out of 5 stars.

Steve Conte Premieres “Dog Days of Summer” Music Video The Agonist – Days Before the World Wept (EP Review)
Like the in-depth, diverse coverage of Cryptic Rock? Help us in support to keep the magazine going strong for years to come with a small donation.