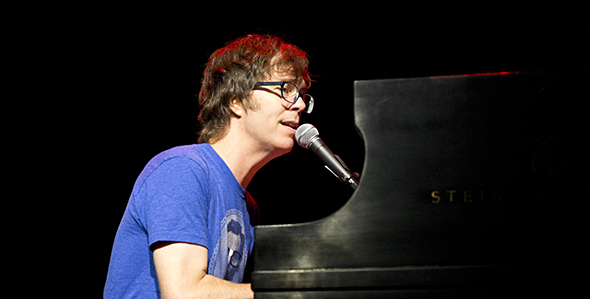 There are few modern singer/songwriters that have captured the imagination of audiences as Ben Folds.  As part of the power-trio Ben Folds Five, his talents broke into the mainstream and that momentum has flowed over into a successful solo career.  Now splitting time between the band and his solo shows, Folds continues to tour consistently around the world bringing his thoughtful songs to audiences.  Days before he heads overseas to Europe, Folds stopped at The Space at Westbury, NY on Monday June 23rd to share his talents with his dedicated Long Island following.

As fans anxiously awaited Folds to take the stage, many could be heard speaking of how his music plays an important part in the soundtrack of their lives.  Beginning shortly after 8 PM, the generous size crowd of all ages gathered close to the stage to watch Folds perform.  With just a single black Steinway & Sons piano in the spotlight, Folds walked out to applause before breaking into a series of his potent and engaging music.  To see the musician perform in this stripped-down fashion after his recent performances with a full symphony orchestra was a special treat for fans.  Playing songs such as “All U Can Eat” and crowd favorite “Annie Waits”, Folds’ voice was crisp and clear as well as his piano playing which resonated through the theater.  Keeping the show intimate and personal, Folds performed in a nice mix of his solo and Ben Folds Five material with songs like “Zak and Sara” and “Kate”.  The blanket feeling among the audience was warm and inviting as they watched Fold bang on the piano and bring the honesty in his voice together with the melodies.  Not keeping the set strictly to just the music perhaps was the most intriguing part of it all as Folds’ humorous personality shined between songs, telling stories of his life which had everyone smiling.  His incredible ability to keep the tone of the set so personal made many forget they were even at a Folds’ concert but rather in their living room hanging out with him as he played music.

As the evening moved on, to fans delight, Folds sang many Ben Folds Five tracks including “Video”, “Tom & Mary”, “Emaline”, and “Steven’s Last Night in Town” among others.  Often getting lost in the art of storytelling, Folds amusingly admitted he forgot what he was going to play next and started to take requests to which a fan shouted “Rock This Bitch!”  Elevating the level of fun as it has been for over a decade in Folds live performances, he improvised a song in 1960’s British style singing about walking the streets of Westbury.  Receiving a wall of laughter and shouts, Folds transitioned seamlessly into the rest of the set following with “You Don’t Know Me”, “Army”, and dazzling piano playing mixed with cleverly rearranged singing of Lynyrd Skynyrd’s “Free Bird”.  Folds’ sarcasm bled through vividly during much of the show without overshadowing his musical craft and merely endearing him more to the audience.

The set wound down with longtime fan favorite “The Luckiest”.  This was just a brief break before Folds came out for a two song encore of Ben Folds Five tracks “Narcolepsy” and “One Angry Dwarf and 200 Solemn Faces”.  Saying goodnight to The Space, everyone cheered loudly showing appreciation to Folds for an excellent performance.  Folds is unquestionably a musical genius which has found a delicate balance between quirky lyrics and wonderfully composed music.  Able to switch gears in each song from softly caressing the keys to banging on them for emphasis and drama is the type of theatrics which keeps fans coming back out to witness his live performances.    Provoking an emotion in his listeners, each song kept the attention of every person on the floor until the very end of the show.  Folds will be back stateside toward the end of July to play more solo shows, so if fans missed this tour they can find comfort he will be back again soon.

Photo credit: Charles Eames
Like the in-depth, diverse coverage of Cryptic Rock? Help us in support to keep the magazine going strong for years to come with a small donation.