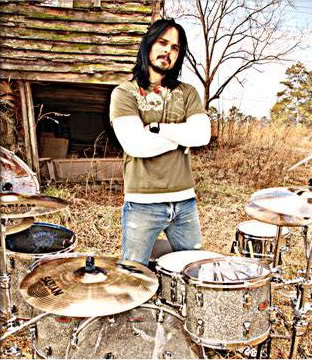 Atlanta, Georgia based drummer impresario Bevan Davies exploded on the scene with his band Still Rain in the 1990s. Quickly gaining him a positive reputation, he earned a gig with Glam Rock band Madfly after Still Rain broke up in 1995, and stayed with them through their two albums, 1996’s Get the Silver and 1998’s White Hot in the Black before changing the band’s name to Come with the Fall and releasing their debut album in 2000. Moving forward and building a strong name, in 2003, Davies did double duty when he started drumming for legendary Metal band, Danzig, while continuing with Come with the Fall.  With Danzig, Davies was featured on their 2004 Circle of Snakes and also toured with the band.  Upon departing in 2005, he did a stint drumming for Static-X before returning to Danzig in 2010 for their Blackest of the Black tour while again doing double duty forming his Rock band, MonstrO, with Bassist Kyle Sanders (formerly of Bloodsimple), Guitarist Juan Montoya (formerly of Torche), and Vocalist Charlie Suarez.  Amidst all the impressive drumming gigs from everyone including the aforementioned Danzig, Static-x, to Jerry Cantrell, and Engelbert Humperdinck, in 2015, Davies has unleash his first solo effort on the world.

Eleven tracks in total, his self-released, self-titled debut album dropped on July 24th and is a compelling listen from start to finish.  The album features a collection of material he composed from early influences that touched his soul throughout his childhood to now ranging from KISS, to John Bonham, to Tommy Lee, and many others.  Coming along for the ride on the record is an impressive list of musicians including Brent Hinds of Mastodon, William Duvall of Alice in Chains, Nate Utz of the Blonz, Tuk of Biters, Roy Cathey of the Fifth Cold Sweat, and Angela Wolfe of Dirty Pollyanna.

The record kicks off in high gear with the cover of Rainbow’s “Kill the King” as the intro has a cutting riff that leads to Davies’ fast and furious drumwork, catchy and tight, with the Speed Metal guitars accompanying and featured in a nice, long solo in this piece.  Next, an ode to Van Halen comes in the form of a cover of “Light Up the Sky” and has a Funk intro that settles into an anthemic beat with chants of, “Open up my eyes/Leave it all behind.”  The short but sweet guitar solo leads into Davies’ solo, an intricate combination that builds with guitars riffing in before closing the track.

Slowing down the tempo a bit, KISS’ “Rip It Out” is no less rocking with its riffed out intro that slips into a head-banging beat that contains a hook followed by Davies’ solo that has a complexity that just takes the piece.  The cover to the Zombies “Time of the Season” is a faithfully recreated fun piece that Davies plays with the solid, yet, wispy, laid back feel this piece calls for to take listeners to the Psychedelia.  Davies’ cover of Black Sabbath’s “Cornucopia” perfectly captures the haunting sounds the band has been known for with sharp, biting strikes to evoke the brooding force of the piece.  “Fireball,” originally done by Deep Purple, starts explosively, and never lets up with Davies hyper drum work driving throughout accompanied with a bluesy Metal riff and organs.

The Doors “Strange Days” cover is a faster version, but again, faithfully redone with Davies’ clean folksy drum work that helps evoke the ethereal vibe The Doors were known for. Moving onto Badlands’ “High Wire” is Davies next homage as he deftly brings the Funk flavor to his underscored drums that still accompanies the guitars rather than outplay them.  Davies’ more Pop-oriented influences shine as the playful beat runs through in Blondie’s “Dreaming.”  Davies kills it on Whitesnake’s “Ready an’ Willing” with a laid back, confident easiness that helps evoke the sexuality of the piece.  Closing out the album is Davies’ rendition of Thin Lizzy’s “Bad Reputation,” a driving piece that Davies dominates with his forceful drum work, again with a confidence to help the theme of the song.  Still, he does not bogart the limelight accompanying the guitars.

Hearing Davies recreate his influences’ tunes for his debut album is a treat.  With that said, here is hoping his sophomore album will be completely original pieces; perhaps, just his drum work with a little accompaniment.  CrypticRock this album 4.5 out of 5 stars. 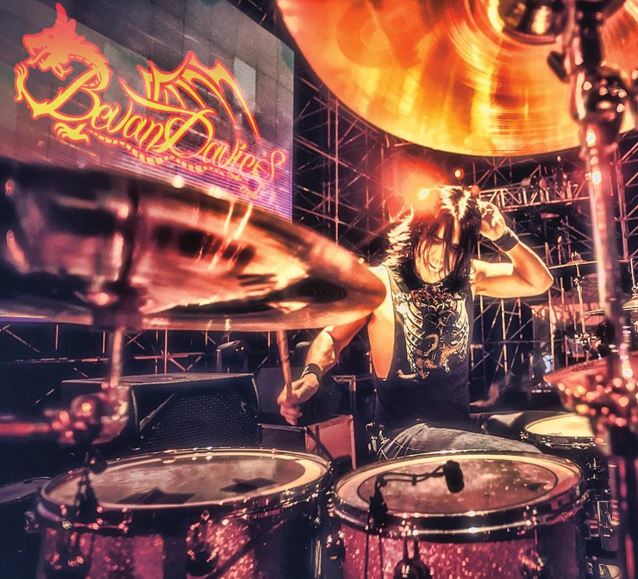