Beyond the Grave (Movie Review)

In the tradition of the Mad Max franchise (1979-2015) mixed with a little George Romero’s Dawn of the Dead (1978) comes latest Brazilian Horror movie release Beyond the Grave from Lockheart Filmes. Also known as Porto Dos Mortos, and Mas alla de la Tumba, production on Beyond the Grave was initially completed in 2010, however, the film was released on February 13, 2015 in America. Written and directed by Davi de Oliveira Pinheiro (The Soul Detective 2009, The Perfect Kiss 2012), the events in the film take place a couple of months after a Zombie Apocalypse. Filmed in Porto Alegre, Rio Grande do Sul, Brazil, in a not so distant future, society as the world knew it has fallen, and only a handful of survivors remain. The atmosphere is bleak and there is little hope for the future. Mingled amongst the zombies and the destitute, there is a heavy dose of black magic and devil worship. The division between good and evil is so slight that it is nearly indistinguishable. 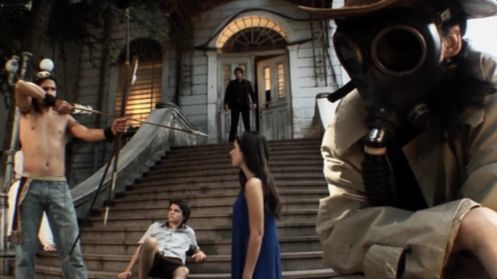 One of the survivors, on the fringe of morality, is a Policeman, known in the film as Officer or Policial (Rafael Tombini: Pierre e a Mochilla 2013, Marinan no Outono 2014) who endlessly searches for a possessed serial killer and his gang. The killer is called the Dark Rider, and it takes a couple of forms; The Dark Rider: Passageiro I, female (Tatiana Paganella: Anywhere 2002, Tea Time 2005), and The Dark Rider: O Passageiro – male (Adriano Basegio: Prato do Dia 2005, Oxigenio 2014). Officer travels the roads in a muscle car, avoiding the zombies, or as they are also The Returned. The Returned follow the Dark Rider, linking the zombies to the black magic. Along the way, the Officer comes across a variety of well-trained killers who are hell-bent on his brutal death. Among the assassins are: Faroeste – The Old West Killer (Claudio Benevenga: O Billet 2011, O Memo Ceu 2014), Espaguete – The Spaghetti Killer (Cassiano Griesang: Anywhere 2002, The Combat 2005), and Samurai – The Samurai (Lindon Satoru Shimizu: Pe Na Porta 2007, Oxigenio 2014), each have their own unique set of death skills. 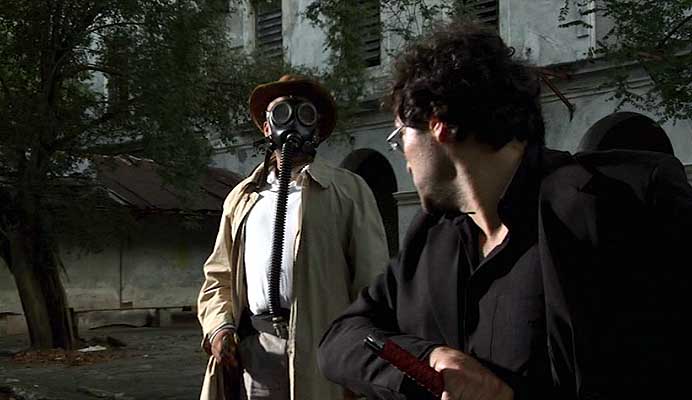 It is rare that Officer meets other people who are not trying to kill him, but on the occasion that he does, it presents to him a glimmer of humanity that still remains in the begotten world. However, his troubled past has carried through to the present and he does not seem willing or able to accept kindness. Despite this, he unwittingly saves the lives of a young couple, who then accompany him on part of his journey. They too are searching for their own form of vengeance which pushed them closer together. Each place they visit is abandoned, covered in blood, and fraught with danger. Eventually, the three come across a family of people, including a pregnant woman, and together they share a meal and their stories. It is not long before a supernatural force initiates a turn of fate, which means the group are now at odds with each other and their future uncertain. Officer continues to be driven by his own agenda and lets nothing stand in his way. 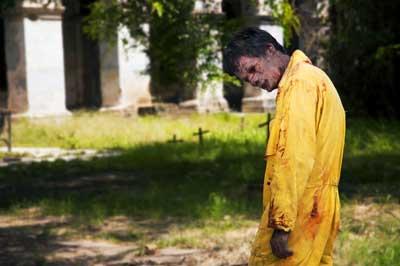 In the background, throughout the film, is the voice of a lone radio announcer (Ian Ramil: Boia 2010, Bagaem 2014), and over the course of the story the viewer learns his sad tale as well. Beyond the Grave crosses a number of genres and uses various camera techniques to tell its woeful story with little, if any, humour to break up the devoid empty landscape. Solid acting is accompanied by unpredictable special effects that vary in their quality. Perhaps some of the story has been lost in translation, as lack of character and plot depth creates no empathy for most of the characters. The cinematography by Melissandro Bittencourt (Tea Time 2005, The Perfect Kiss 2012) definitely creates a strange, eerie feeling, and the solitude echoes through each scene. Unfortunately, by the end of the film, there are no real conclusions reached, and not enough backstory to complete the picture. However, Pinheiro has succeeded in delivering an otherworldly feel with intermittent action driving the plot forwards. CrypticRock gives Beyond the Grave 3 out of 5 stars. 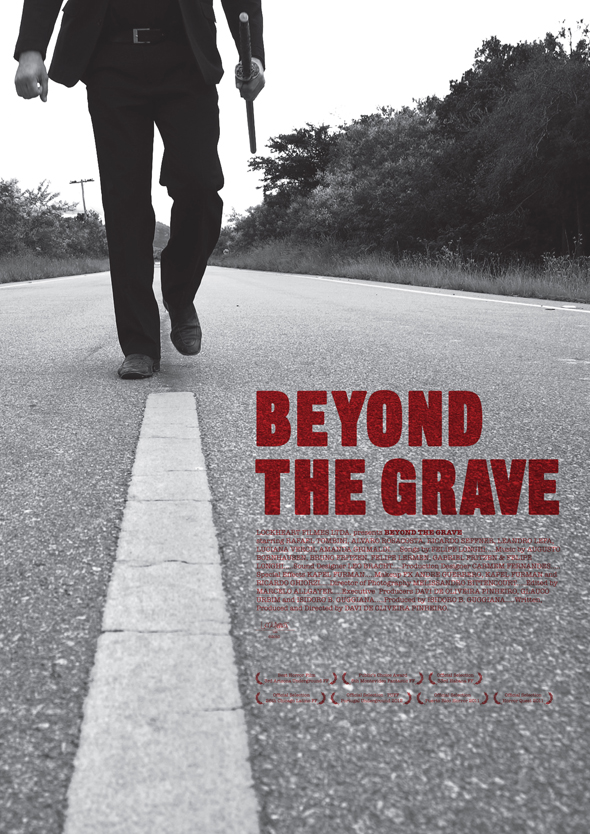