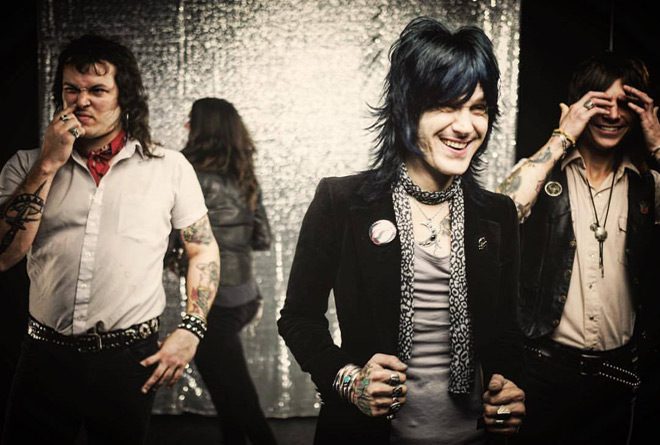 Remember that feeling you had in high school? The one you had while you were getting ready to go out and paint the town red on a Saturday night? The one when you first fell in love? Had a broken heart? The one you had when you put on your favorite album? Well, that sums up the feeling of the Rock band known as Biters.

Hailing from the Atlanta, Georgia area, Biters’ sound is deeply rooted in Classic Rock, early Thrash and Glam, with a Punk Rock edge for good measure. We are talking The Dolls, Thin Lizzy, T-Rex, David Bowie, Ramones, and KISS type of influences. Not only can you hear it in their music, but you can feel it – the vibe, the passion, the authenticity.

Initially formed in 2009, the band currently made up of Tuk Smith on vocals/guitar, Matt Gabs on lead guitar, and Joey O’Brien on drums carry on without Bassist Phil Kross right before the band was set to headline a US East Coast tour. Luckily, Smith called longtime Biters friend, Ricky Dover Jr. to step in and fill in on bass as they kick off the run September 15th down in Atlanta for their record release show. What record are they celebrating? The answer is simple, their sophomore full-length album, The Future Ain’t What It Used To Be. Initially released back on May 19th of this year via Earache Records, those who have not heard it yet need to get up to snuff.

A follow-up to their 2015 album Electric Blood, The Future Ain’t What It Used To Be was produced by Dan Dix, made Team Rocks list of best albums of 2017, featured in Classic Rock magazine, and were just announced to be playing this year’s Kiss Kruise which sets sail out of New Orleans on November 5th. Yes, that KISS! So what can fans expect from their new album? Imagine a sold out stadium Rock show in the ’70s with screaming guitars with giant hooks, monster drums, and vocals that are actually sung. Teeming with raw emotion, sincerity, yet verging on anarchy, that is the best way to describe The Future Ain’t What It Used To Be.

Keep in mind, this album is a departure from the straight up AC/DC type bombastic assault of their precious effort Electric Blood. Their first full-length, Electric Blood was the perfect album to be supporting as they were on the road with Buckcherry. This time around, Smith and company wanted to make sure people did not see them as just another party band. Not only is the sound totally different, but the songs are empowering!

The first single off this album, “Stone Cold Love” is a melodic wall of sound. Smith’s voice is beautifully woven into the verse, and the chorus is another matter, as his voice seems to ascend from the heavens with the ferocity of a hellhound before setting back into the verse. After the third verse, Gabs kicks off a butter-smooth solo one might expect from Ace Frehley.

Ten songs in total, there are plenty of highlights, but “Don’t Turn This Good Heart Bad” is a true stand with a killer guitar opening that keeps going from there. That said, the guitar sound and Smith’s vocals are a big part of The Future Ain’t What It Used To Be, but let’s not ignore the rhythm section. O’Brien’s drumming could not be any stronger – it is exactly as complicated as it needs to be, nothing more, nothing less. It is a driving force throughout, that never distracts from the goal of where the song is taking us. In an age of double bass drum hysteria, this is a refreshing break. What you get instead is a driving beat with an incredible swing.

The Biters are certainly not Lynyrd Skynyrd, but their southern heritage is not lost with this new album either. Although subtle, songs like “Calling You Home,” “Gypsy Rose,” and the beautiful acoustic “Goin’ Back to Georgia” have a slight southern twang to them. Furthermore, the track that is most striking and unique from the rest is “Vulture City.” Seemingly the hardest driving song on the album, it is straightforward Rock-n-Roll. On the flip side, there is “Hollywood,” a mellow song that dances on the edge of breaking loose, with lyrics about the struggles we all go though.

All in all, every song seems to compliment the next, never boring the listener in the least. There are several songs that have that “next single” feel, but listening to the album in its entirety, you get the impression it was written to be a cohesive album. Playing a handful of shows now until the Kiss Kruise sets sail, do not miss Biters. An album that is a must have for any truck Rock-n-Roll lover, CrypticRock gives The Future Ain’t What It Used To Be 4.5 out of 5 stars. 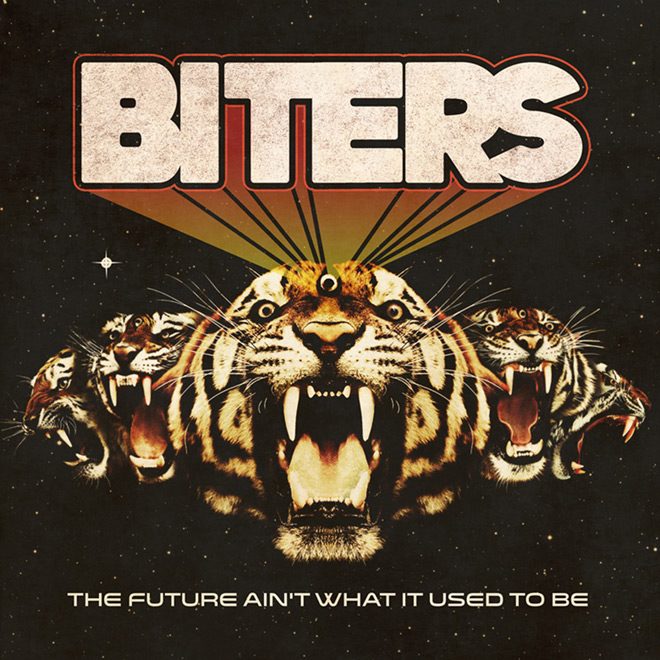