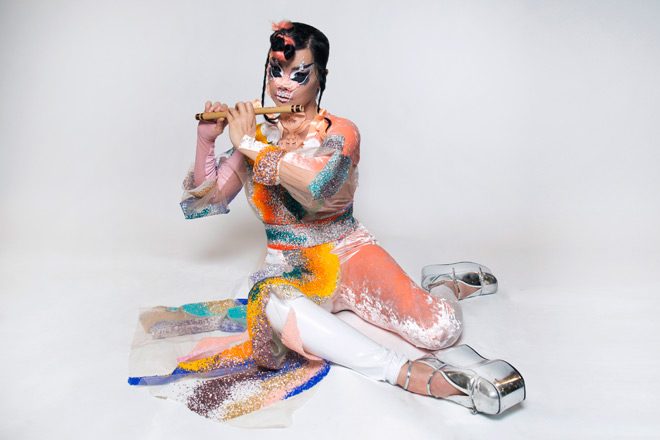 Björk, it is a name in music that has always been anything but ordinary. A singer, songwriter, actress, record producer, and DJ, the Icelandic artist’s style is impossible to categorize, so let us just call it uniquely her own. Formerly the lead singer of Alternative Rock band The Sugercubes, Björk would go on to launch a solo career come the 1990s, producing one top-selling album after another.

Building a fanbase in the process, Björk is defined by her innovative vocals and compositional approach, musical experimentation, but most of all, artistic direction. Now, four decades since she initially recorded and released music in her homeland of Iceland, Björk returns with her latest creation, Utopia.

Officially her ninth solo studio album, Utopia hit airwaves on Friday, November 24, 2017 through the London-based Indie label One Little Indian Records. A follow-up to 2015’s Vulnicura, even though Björk is most known for danceable beats and catchy Pop tunes, 2007’s Volta is arguably the last album she released with such a feel. Unwilling to conform to a specific genre, her work seems to have become more complex as well as abstract throughout the years, and Utopia is no different.

Certainly an optimistic title, Utopia is not an easy place to reach. That said, Björk envisions a realm of romantic promise and civic cooperation. Consisting of 14 tracks, at over 70 minutes long, the album teleports listeners to a dream-like land. A place full of “bird species never seen or heard before” and with “the first flute carved from the first fauna,” as vividly described in the title-track which is a trip into a sonically astounding fantasyland.

Now, some may say you cannot have good without evil, and if that is true, then you cannot have utopia without dystopia. Björk, like many of us, certainly has experienced her lows. This was evident with Vulnicura, which brutally detailed the end of her lengthy relationship with Artist Matthew Barney. Overcoming such pains, even the latest political turmoils have not brought her down as she has simply created an urgent need for positive thinking. So, in many ways, one can see the birth of Utopia as necessary, simply for Björk’s sanity, but also to find balance.

All this in mind, Utopia may need a few listens before it truly sinks in. The song structure is not what one would call standard, but if you are listening to Björk that should be a given. What do you get? To simplify it, your ears are bombarded by a wall of sound, going in several directions all at the same time. Part of this can be credited to the incompatible production of Arca. A longtime collaborator with Björk, one can not simply overlook his importance to the delicate nature of each album they work on together, including Utopia.

From the explosive opening track “Arisen My Senses,” which is quite Pop-like yet a soundscape orgy, to healing textures of lead single “The Gate” and beyond, there are far from any moments that are alike on Utopia. Juxtaposing points when the sound starts to overwhelm the listener, is an uplifting airiness. Björk said that air was a conscious, stylistic choice for the album. Furthermore, the melodies of Utopia were reportedly composed while out walking in the Icelandic wilderness. Once the melodies were completed, she wrote the flute arrangements, later superimposing the melodies. The lyrics were the final element in the songwriting process.

The sounds and compositions of Utopia certainly could have been arrange in a straightforward way, Although, in true Björk fashion, straightforward is not the case. The constant changes, with instruments coming in and out of the mix, will keep listeners from shifting their attention elsewhere, which is a good thing. At some points, samples seem to come out of nowhere, then abruptly end. A prevalent example can be heard during “Sue Me” where there are once again flutes, but this time with an electronic drum beat over the top as well as a distorted voices comes in and out, seemingly cutting mid-word each time.

Full of interesting tones throughout, one thing for sure, Björk gives a wonder vocal performance on Utopia. Her voice is absolutely, melodically beautiful, as heard on almost Classical sounding “Tabula Rasa,” the angelic single “Blissing Me,” and album’s sparse, hopefully final track “Future Forever.” Additionally, she deliveries a very strong vocal performance on “Features Creatures,” an arrangement with only minimal instrumentation, but only very airy flutes and a choir in the distance. On the flip side, “Courtship” is an in-your-face, frantic composition heavy in percussion and held together with, you guessed it, flutes.

Utopia is cinematic. The music paints pictures, and rather than focusing on just one track, it needs to be listened to in its entirety to understand the process. It is a concept piece, one where various emotions are released from sadness, to acceptance, to hope. If a film could be recorded into music and released as purely audio, Utopia would be a fitting example of such. Think Guillermo del Toro’s 2006 visually stunting masterpiece Pan’s Labyrinth.

Structure is not part of the equation here, Utopia moves forward, but is not that the point? Björk’s objective was to create something that showed the progression of positive thinking – we need to keep looking toward the future to keep this keep this state of being. In enough words, these songs are a challenge to memorize since typical songwriting structure includes some repetition, but that is the beauty of Björk! An album for open-minded music lovers, and of course Björk fans worldwide, CrypticRock gives Utopia 4 out of 5 stars. 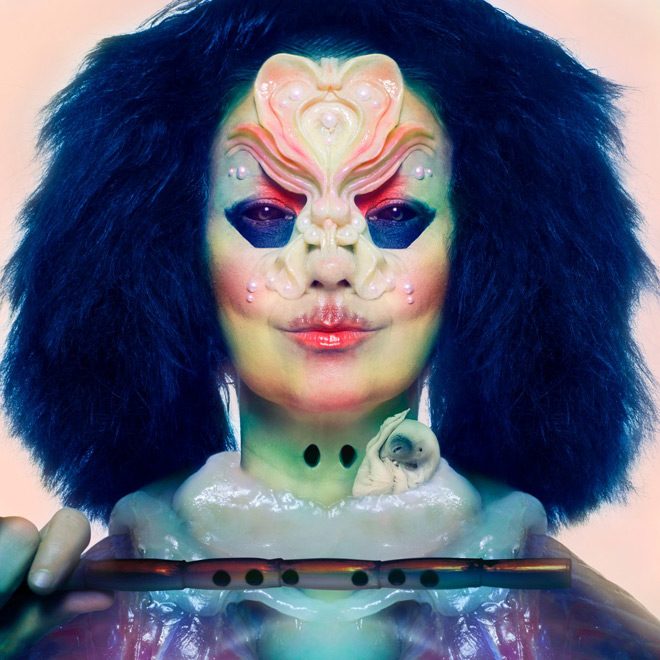