Events happen in life that are devastating. Unforeseen events often occur that changes the very fabric of lives. Sometimes people show up and change everything that makes sense. Life is unpredictable and chaotic. That is part of the beauty of it, but that does not mean that most would not change things about the past. If only it were that simple, how different would the world be now? How would altering just one thing affect the people surrounding it? 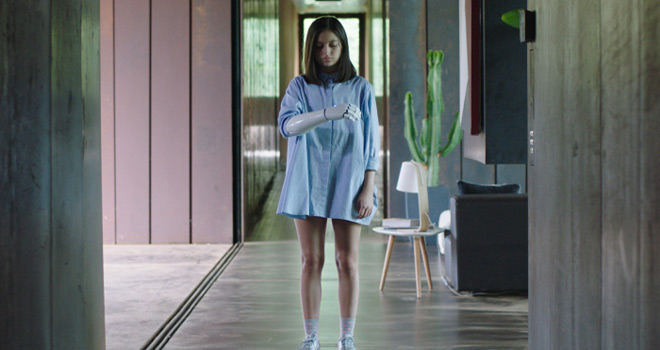 Directed and written by Sadrac González-Perellón, Black Hollow Cage attempts to answer some of these questions in the lives of a choice few. Nominated for several awards at various film festivals in 2017, the young Spanish filmmaker’s debut feature film arrives in US theaters and VOD on Friday, February 9, 2018 thanks to levelFILM.

Black Hollow Cage opens with a man, Adam (Julian Nicholson: No More Shall We Part 2011, Sunsets & Silhouettes 2014), being attacked in his home by a man in head to toe black. Without knowing why or what happens, the scene quickly cuts to his daughter Alice (Lowena McDonell: The Boarding School 2007, Punta Escarlata 2011) who is receiving her new mechanical arm. For her to gain strength, she must learn how to pick up and balance three cylinders of varying widths. The doctor warns her that the first step is easy, but it gets harder as she progresses. She seems ashamed of her missing limb and does not want her father to see it.

Alice goes for a walk with her white wolfhound, Beatrice, voiced by Lucy Tillett (Shiver 2008, Paintball 2009). Beatrice has a collar with some kind of speech speaker that allows her to speak. As the two walk in the woods, they come across a giant black cube. Beatrice is wary of the cube, but Alice ignores her. She inspects the cube and discovers a way to open part of it. She retrieves a scrap of paper with a note in her own handwriting. She does not know what it is but seems determined to figure it out.

The same day the cube appears, Adam finds two strangers in need of help. Erika (Haydée Lysander: Cinq minutes 2013, Casa de sudor y lágrimas 2018) and her brother Paul (Marc Puiggener). Erika has been beaten up fairly badly. Adam tries to ask Paul what happened, but he is a mute. Erika tells him that her boyfriend David (Will Hudson) is the culprit, but begs Adam not to call the police. She tells him Paul can speak, but since he witnessed the attack he is unable to. She is concerned the police will only make him worse. Adam agrees and the pair become yet another strange addition to the landscape. Beatrice warns Alice that they “don’t smell right” to her, but she is ignored. 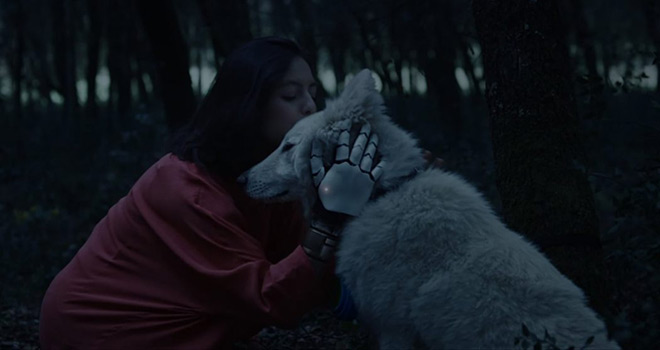 Overall, the progression of Black Hollow Cage flips back and forth between the same events, only differently. Different choices are made with vastly different outcomes. The lines of reality seem to continuously blur. What exactly is going on here? What is the mysterious black cube? Who are Erika and Paul really? How are they all connected, or are they?

Those questions raised, there are many layers to Black Hollow Cage. The most obvious involves the strange black cube and the time loops that continues to change small but significant events. Alice does not seem to be afraid of it or its sudden appearance. She appears to be more curious in the most familiar way. This is curious for a girl who does not seem to trust anyone or anything else except for Beatrice. The box is the supernatural element in this film. It seems to just appear without explanation of its origins or purpose. It is an unknown that draws the viewer into the story. Unlike most Sci-Fi films, though, the seemingly supernatural element is not the star of the action. It exists and is possibly the cause of certain events, but it is not the focal point of the action. It serves as more of a catalyst to the development of the characters.

Loss is another layer to the film, it is threaded in every fold and seam of the characters and their actions. Alice has lost one of her arms. Both she and Adam have lost the mother/wife figure in their lives. Paul has lost his voice. Erika and David have lost their way in life and more. Beatrice has lost the ability to simply be a pet – an animal. Each character is trying to manage their way through their own new normal. They are all working through some kind of grief in this secluded setting where no one seems to truly want to face their own truths. Their own new realities. Yet, none of them reach out and try to heal within each other. Instead, they allow their suffering to go in silence which fuels their mostly irrational actions in an attempt to fix what has happened. Even the title suggests as much. Black is generally associated with mourning. Those who are mourning often feel hollow or lost. The cage represents the idea that none of the characters are trying to reach out and heal in a healthy way. 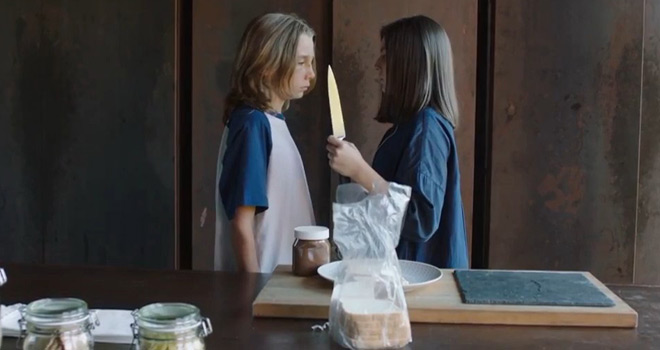 Furthermore, the dynamic between Adam and Alice is also important. It is clear that the two are at odds, but it is not the typical preteen angst, though. Her insistence that Beatrice is actually her mother is a sore spot between the two. Adam tries to reason with her, but she will not have it. Alice seems to blame Adam for the loss of her human mother. She informs him that he “transformed” both she and her mother. He has taken her arm and turned Beatrice into a dog. Though Alice insists the dog is her mother, she still mostly treats Beatrice like a dog or a prop. When she does not want her around she simply pushes her back into her room and does whatever she feels she needs to do. Adam barely acknowledges Beatrice. Their family unit is broken. Neither appear to want to fix whatever it is that caused the rift.

Interestingly, the dialogue throughout Black Hollow Cage is quite sparse and a lot of the interactions between characters happen without words. They all seem to have their own agendas and only acknowledge whoever is sharing the same space with them when it is absolutely necessary. The silence is more powerful than any words could ever become. It makes everything that is actually spoken significantly more important and powerful. It helps add to the intrigue and isolated feelings that the film is trying to invoke.

All this in mind, Black Hollow Cage is a haunting narrative about dealing with grief and trying to cope with change. Traumatic events often times leave large gaps in lives that can never be filled. The desperate need for things to be as they were before never fully disappears. The film expertly allows the viewer to ride with the characters on their emotional roller coaster with sprinkles of the unknown and unexplained. It is for these reasons that CrypticRock gives Black Hollow Cage 4.5 out of 5 stars. 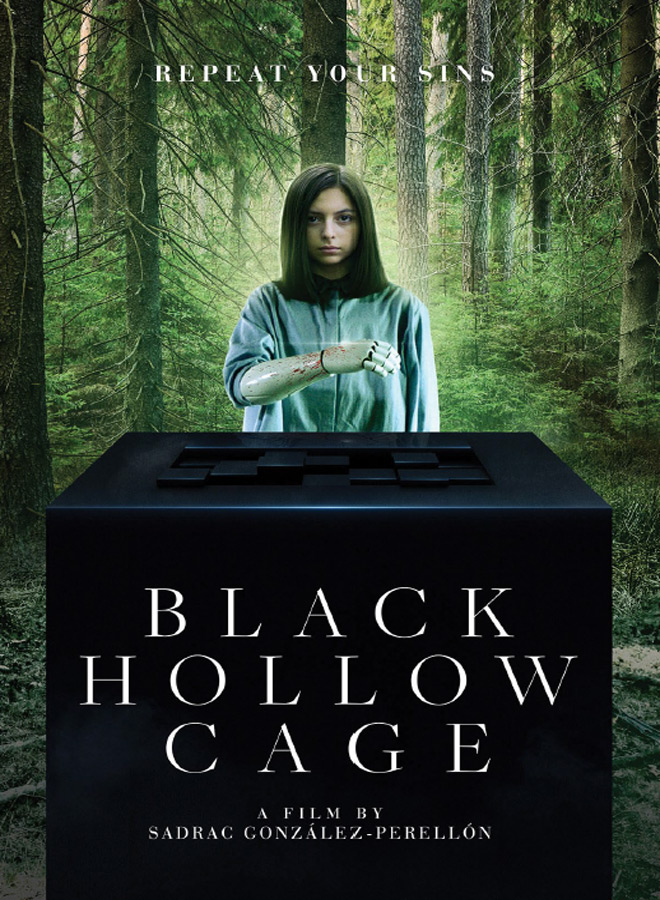