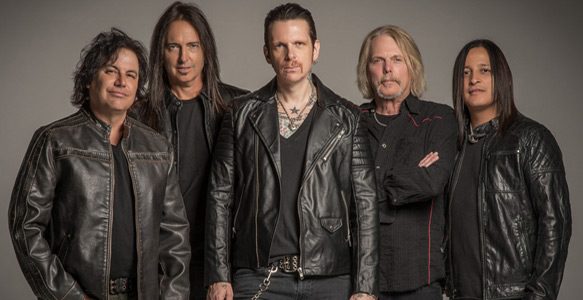 Rather than sit back and reflect on the past glory of Thin Lizzy, their legendary Guitarist Scott Gorham, decided, when it was time to record fresh new material, to launch a new band called Black Star Riders.

Forging a new path, Gorman, along with current Thin Lizzy members Ricky Warwick (vocals) and Damon Johnson (guitar),teamed up with Marco Mendoza (bass) to form Black Star Riders. Not a Thin Lizzy tribute band, Black Star Riders take their sound forward, not backwards, with its own purpose, and a lot of respect for the reputation of Phil Lynott.

An active band for six years now, Black Star Riders have toured with everyone from Skid Row to Europe, releasing their debut album, All Breaks Loose, in 2013 and The Killer Instinct in 2015. Now, a mere two years later, they are back with their third album, Heavy Fire.

Released on February 3rd, for the new album they once again teamed up with Producer Nick Raskulinecz and recorded the materials at Rock Falcon Studio in Franklin, Tennessee. Currently consisting of Warwick, Gorham, Johnson, along with Robbie Crane on bass and Jimmy DeGrasso on drums, the veteran band set out to give fans yet another strong album of Rock-n-Roll music.

Opening with the title track, “Heavy Fire,” Black Star Riders pack quite a punch. Fierce and furious, with a strong groove and plenty of ups, downs, changes of tempo, and style, it is like a showreel of what to expect from the rest of the record. Moving on to “When The Night Comes In,” they offer a high octane rocker with soulful backing vocals and a hook that will make listeners want to dance. Talking about dancing, “Dancing With The Wrong Girl” is where Warwick morphs from the ’80s Sex God into Phil Lynott; it is reflective of Van Morrison’s “Dancing in the Moonlight” for the modern generation.

Then, getting more topical, “Who Rides The Tiger” focuses on America’s gun laws. A hot topic, they bring to light the danger that lurks behind such policies which create a situation where a school is the target of a mass shooting at any given time. Lightening up on the heavy social topics, “Cold War Love” is a glorious song of broken love. A little too fast to be considered a ballad, it is more of a plea for a second chance. Likening a romance to self-destructive prophecies seems a little bleak, but it is delivered with such beautiful tones and enticing melodies.

Picking up the pace once more, “Testify Or Say Goodbye” is full of attitude, a no nonsense, spare no punches song that rocks out big time. Thereafter, another warning comes in the form of “Thinking About You Could Get Me Killed,” a track inspired by a conversation with a homeless Vietnam Vet. For such bleak subject matter, it is high octane and upbeat, thus, sure to be a real crowd-pleaser live.

Getting down and funky, “True Blue Kid” has shades of Thin Lizzy’s “Jail Break” as Warwick’s voice haunts while the guitars shine throughout. This is before “Ticket To Rise,” which deals with troubled youth, not giving up, and getting more out of life than you thought was possible. A positive message to those who are on the bottom and need hope, Warwick himself describes it as a cautious memo to a relative about the path they are taking. Closing out the album, “Letting Go Of Me” is the last of the ten songs featured on Heavy Fire. Quite up-tempo, it is a break up song that does not dwell on emotions or negativity, but rather looks at it with a dose of realism and practicality.

Overall, Heavy Fire gives listeners exactly what they want – Rock-n-Roll that is highly enjoyable and lively. If this is where Thin Lizzy would have gone, then it is not very far from where they already were because the songs are strong, filled with great stories, and superb musicianship. Black Star Riders are a band with a great pedigree who deliver on promises. The only thing that some people might struggle with is how much Lynott oozes from Warwick’s pores, which is in many ways wonderful, but in others is unnerving, merely because it feels as if Lynott is being channeled from beyond the grave. That said, Warwick is a powerful enough singer to make his own mark on these songs and it is obvious that he intends to do just that. CrypticRock gives Heavy Fire 4.5 stars out of 5. 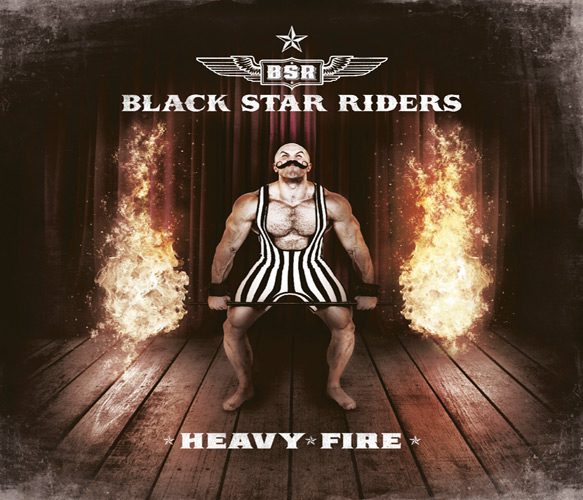