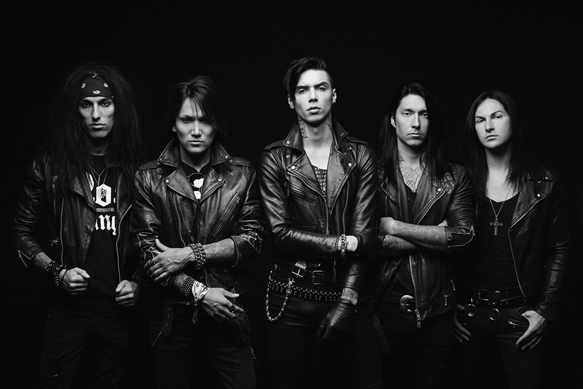 In 2006, Andy Biersack started a band that would grow into a whole other beast. After moving to Los Angeles, CA in 2009, Biersack started a new band under the name “Black Veil Brides” and the rest, as they say, is history. When the band first debuted in the scene they were praised by some for their Classic Rock nuances and influence, but criticized by others for their extreme appearances which, at the time, included heavy white make up with black war paint, heavily teased hair and lots of leather. This look was inspired by Biersack’s original motivation for beginning the band, to have a hybrid band that paid homage to his two favorite bands: Mötley Crüe and KISS. Since their eclectic beginnings, Black Veil Brides has evolved into a less dramatized version of themselves, complete with fewer apparent direct influences. The band derived its name from a Catholic term for nuns, literally meaning a woman who marries into the church to devote her life to God. With their fourth release, Black Veil Brides IV, they touch on this and other religious iconography while moving through an emotional journey of self-discovery and assurance.

The adventure begins with the powerful and rollicking “Heart Of Fire” which makes for a great introduction to the technical composition of Black Veil Brides. With its echoic vocals in the breakdown and the impressive string work of Pitts and Ferguson, this is laying down the expectations for the rest of the album. “Faithless” follows this and rolls smoothly with its anthemic chorus and resonating backing vocals alongside Coma’s heavy drums and another of Pitts’ electric solos. It feels like a song that could be found on one of the Lost Boys revamp with the way the backing vocals echo and resonate as well as how it swells and falls. In “Devil In The Mirror,” Biersack’s vocals meld with the music to create a single harmony and carry an almost M. Shadows smokiness. “My voice is a weapon, my fear is a lie.” There are so many quotable lines in this song as it carries the message of persevering in spite of the odds and battling one’s own inner demons.

“Goodbye Agony” is the real heartbreaker here with a feeling and tone similar to Skid Row’s “18 and Life.” This track touches on the topic of letting go of the things that hold us down and haunt us. Learning to move forward can be a powerful and painful thing and Biersack hones in on that beautifully. “I never knew that hope was fatal until I looked it in the eye.” Lamenting a love lost to reclaim a sense of self is the permeating theme in this song and you can feel the emptiness. Even if you are not a Black Veil Brides fan, everyone can relate to the feeling. Picking back up the pace is “World of Sacrifice” with its quick pace and forward moving drum beats reminiscent of Avenged Sevenfold. It is all about not compromising yourself for the things that look appealing in today’s world, and fame and fortune are not all there is to life, there is also actually living. “Last Rites” gives a HIM meets Avenged Sevenfold feel with its Goth Rock sentiments latent in the guitar drive, Purdy’s resonating bass line, and Biersack’s vocal gruff and grit. One cool thing about the guitar sound in this track is at the breakdown and solo it takes on an almost 8-bit sound.

Delving into darker vocal territory comes “Stolen Omen” with its surprisingly guttural vocal highlights that, while not necessarily intimidating, are not the worst attempts at doing so in musical history. Perhaps Biersack and company could work on adding a little “oomph” to the guttural work and in the meantime either employ outside assistance in the form of a featured guest or avoid them altogether until it carries some weight. “Walk Away” brings another ballad to the table that has a softer approach with the addition of a piano or keyboard intro and much softer drums and strings. Emotionally, it is apparent that this is another breakup song, but meant to be considerably more uplifting and empowering as it seems to feature and almost gospel-like quality and chorus. The guitar solo on this track and the addition of what sounds like an actual choir in the bridge and chorus make “Walk Away” extremely dramatic, powerful, and compelling.

The guys do not let you stay in the doldrums for long before bringing things back up with “Drag Me To The Grave.” Hitting on various Rock elements across the board and highlighting the concept of several backing vocals once again, this tune hits on championing one’s own inner demons and staving off self-destruction. It pays great homage to classic Heavy Metal elements and hosts a fiery guitar solo, but at this point they are to be expected. Black Veil Brides is certainly taking advantage of their skilled strings section, but they may benefit more in the long run by withholding a little in places and not featuring a guitar solo in almost every song so that they can be relished and appreciated at every occasion rather than commonplace. “Shattered God” is the next tune to feature those trademark classic Heavy Metal nuances paired with some modern effects for emphasis. The guitar on this song sounds like Pitts and Ferguson dancing across their frets and delivers as more playful in execution. Rounding things out is “Crown of Thorns” which, besides being a direct reference to Christ and the crucifixion, seems to be a metaphor for sacrificing oneself for another. It is about the willingness to endure pain for the salvation of another and being an inspiration or a symbol of hope. The overall composition gives the song a very otherworldly and supernatural feel. It has a beautifully somber bridge with accented drum work and high hats, before it rolls into a slightly darker, almost sinister sound and rising again to its former upsweep.

Having begun their career as a band, critiqued for their Classic Rock and Metal influences, it only seems appropriate that this album is their self-titled. It features not only those same influential elements, but religiously affiliated titles and themes that touch the very root of their namesake. Black Veil Brides IV makes for a good overall Rock album with little flaws here and there. Bringing interesting technical composition and lyrical depth, this album is an interesting journey through self-discovery, love, loss, and sacrifice. CrypticRock gives Black Veil Brides IV 4 out of 5 stars. 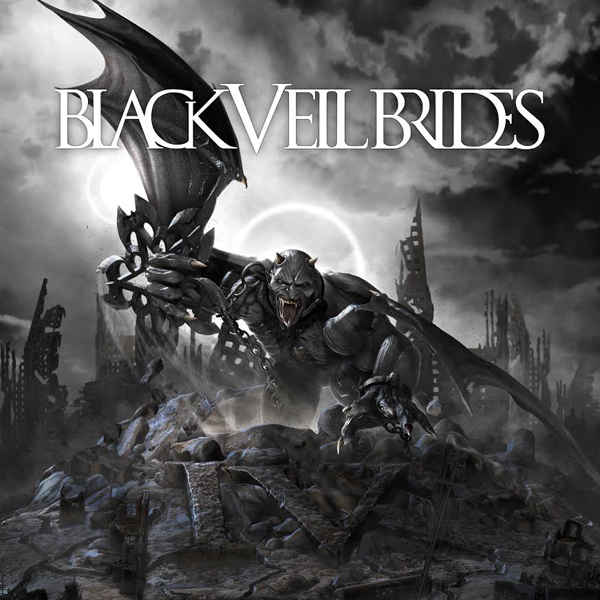