What is in the basement of The Bramford School For Girls, and who put those severed heads in a suitcase? Pondering that very thought, The Blackcoat’s Daughter will take viewers on an intense, dark, haunting journey through an abstract world of psychological disorder. Originally released to DirectTV Cinema on February, 16th, The Blackcoat’s Daughter gains a second life and arrives on VOD, as well as in select theatres, on March 31, 2017 via A24 Films. 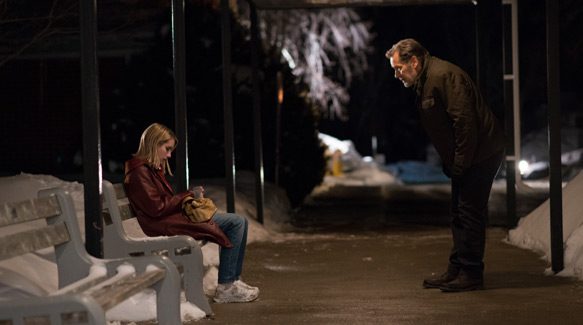 The directorial debut of Osgood Perkins is the darkly intense and deeply haunting tale of three young women: Katherine/Kat, Rose, and Joan. They begin with freshman Kat – played by Kiernan Shipka (Mad Men series, Flowers in the Attic 2014) – who is a decidedly unsettling young lady.

Kat dreams of a demolished car covered in blood, she laughs at inappropriate moments, hears disembodied voices, and much of what comes out of her mouth is mega creepsville. Let us not even get into the wacky pilates positions she strikes in her sleep! Is she a schizophrenic, suffering from Dissociative Identity Disorder, or is something more sinister at work here?

When it comes time for a pre-winter break recital, Kat’s parents are a surprising and upsetting no-show. Not surprising is the absence of the parents of schoolmate Rose – played by Lucy Boynton (Ballet Shoes 2007, Sing Street 2016) – who has intentionally told her parental units the wrong date for winter break.

Rose is clearly the wild child here: she confesses to her roommate, whilst smoking a cigarette, that she is pregnant and has not yet informed her boyfriend. Rose is trouble and Kat is meek and mousy. Stuck together in a snow-covered landscape until their parents can be tracked down, Kat and Rose become inextricably intertwined. 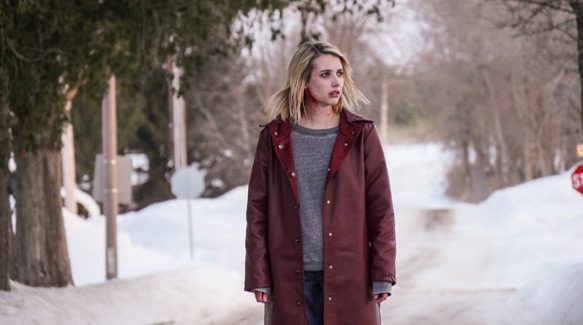 Here is where the story gets confusing: in a tandem storyline that is obviously interconnected, Joan -played by Emma Roberts (Scream Queens series, American Horror Story: Coven series) – is a young woman seemingly down-on-her-luck and trying to work her way to The Bramford School. When a kind man (James Remar: The Warriors 1979, Dexter series) offers her a ride with him and his wife (Lauren Holly: Dumb & Dumber 1994, NCIS TV series), Joan quickly learns that this couple have lost their teenage daughter. Eventually, all of these individuals’ paths will cross somewhere in the February snow.

The Blackcoat’s Daughter (originally titled February) is a film that is actually several years in-the-making: it originally premiered at the 2015 Toronto Film Festival. Oddly, while this is the directorial debut of Oz Perkins (who also authored the screenplay), his second film, I Am the Pretty Thing That Lives in the House, was already released in 2016. A bizarre twist that perfectly parallels an odd first offering, but not so bizarre as to avoid acclaim: The Blackcoat’s Daughter has already been nominated for the Best American Independent Feature Film at the 2016 Cleveland International Film Festival, as well as the Narcisse Award for Best Film at the 2016 Neuchâtel International Fantastic Film Festival.

Filmed in and around Ottawa and North Grenville, Canada, The Blackcoat’s Daughter is a bizarre, abstract, experimental piece of Horror. The film presents a non-linear story arc that leaves viewers to often question what is a flashback and what is the present tense. Also not helpful is the fact that Roberts and Shipka look nearly interchangeable, like twins. Is this intentional casting? It seems likely. After all, this is a story with multiple interpretations readily available, placing it into the Horror and/or Psychological Thriller genres. It all depends upon your personal interpretation, and your answer to the film’s most key question: Are Kat and Joan two different young women? Viewers will have to see the film at least once – and probably twice or thrice – before they can fully wrap their mind around it all. 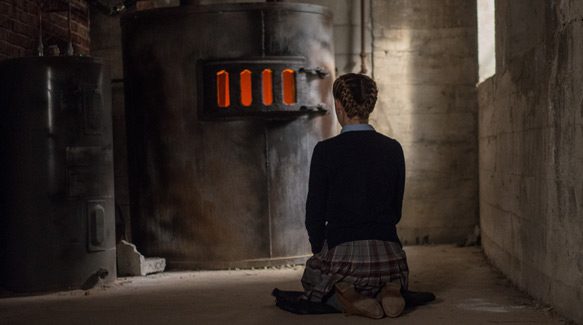 There is a languid pace to The Blackcoat’s Daughter. Do not expect any rushing around, loud sounds, or frenetic moments; everything is set at a steady pace, but a highly controlled one. In fact, the pacing mirrors perfectly the control of Shipka’s Kat, a girl who completely lacks affect. Similarly, this is a movie that is shot entirely in dark, neutral shades: even the blood is a dull red. All of these variables serve to better focus the viewer’s attention on what matters most, and it is not the clothing or the wallpaper. 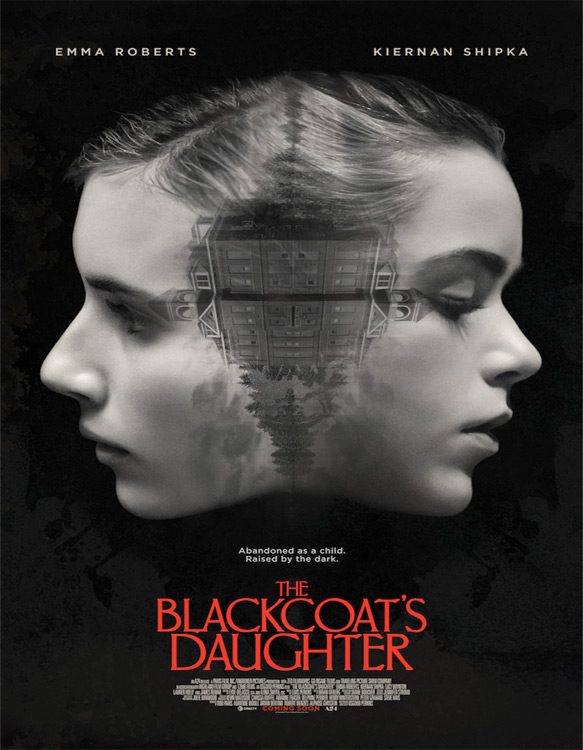