Not everyone was so keen on a sequel to Blade Runner 35 years removed from the original. They had been burnt by long-awaited sequels before. Prime examples, 2008’s Indiana Jones and the Kingdom of the Crystal Skull proved underwhelming, 2009’s Terminator Salvation ended up more popular for what happened off-screen than on it, while the Alien sequels got further and further away from their apex. Even when Ridley Scott returned to that series to bring it out of the doldrums, 2007’s Alien Vs Predator: Requiem left it in, and the reception was mixed. 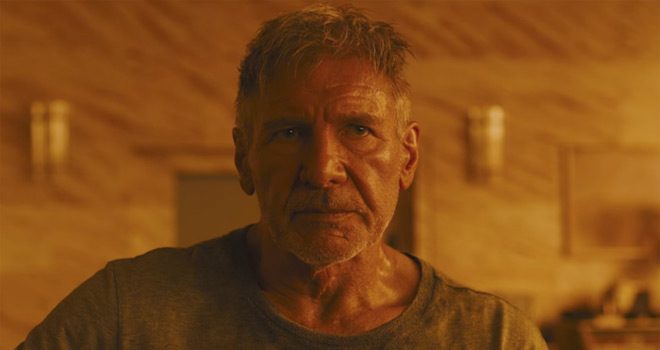 Then there was 2012’s Prometheus, which started off strong, but in hindsight has not done it any favors. Following this year’s release of its sequel, Alien: Covenant, Empire Magazine described both films as having “thick-headed characters driving the plot with bad decisions.” With Scott busy on Covenant, he left the directing chair on this film to Denis Villeneuve (Sicario 2015,  Arrival 2016), taking up the executive producer role instead. The original film’s scriptwriter, Hampton Fancher, also returned to the fray, working alongside Michael Green (Green Lantern 2011, Logan 2017) to adapt his original story of 1982’s Blade Runner into a screenplay for Blade Runner 2049. Hitting theaters on October 6, 2017 through Warner Bros Pictures, is it a story worth telling?

It is 30 years since the events of the first Blade Runner. The Tyrell Corporation has long since fallen and has been re-appropriated by Wallace Corporation. Alongside a range of new gadgets and technology, they produce newer, longer-lived replicants for menial tasks. The story follows one of them, Officer KD6-3.7 (Ryan Gosling: Drive 2011, La La Land 2016), or ‘K’ for short. He works for the LAPD as a blade runner – tracking down rogue replicants and eliminating them. After one such encounter, he finds a box buried nearby. Its contents reveal a secret that could change the world, and put K at odds with Wallace Corp, the LAPD, and himself. 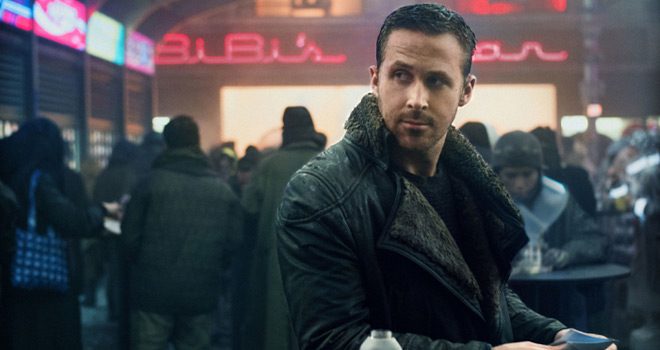 Alcon Entertainment bet big on this film being a success, partnering with Sony to put together its $150 million budget, and getting Harrison Ford to come back as Deckard, as well as casting Gosling, amongst other deals. Time will tell whether it will break the bank at the box office, or whether it will have a legacy on par with the original’s. Right now, what can be said is that it manages to live up to the hype and then some. It manages to be as fascinating as the original, but it does so by walking alongside it instead of following in its footsteps.

For example, the original sparked decades of debate over whether Deckard was a replicant or not through how it was interpreted (e.g. the origami horses). In this film, K is identified as one early on, and attitudes towards ‘skinjobs’ like him have barely improved over 3 decades. They are patronised at best, junked at worst, and scorned upon every other time. That in mind, 2049’s LA remains as dark, cramped, wet, and foreboding as ever, but the noodle-strands have been replaced with large vending machines, companies from today join ones from the past, and the giant advertising screens are accompanied by holograms of sexy women promising the lonely underclass all that they desire and more.

The dilemma of being an artificial human in a world where genuine, living creatures are rare, remains the backbone of the plot. It fuels K’s investigation, and is the source of the film’s twists and turns. The holograms, notably K’s partner Joi (Ana de Arnas: Faraday 2013, War Dogs 2016), give the film a whole new dimension to work with. They are treated as billboard cheesecake at best, or like intangible blow-up dolls at worst, but the way K and Joi’s relationship plays out – two artificial figures, one ‘soulless,’ the other intangible – comes off as genuinely touching. 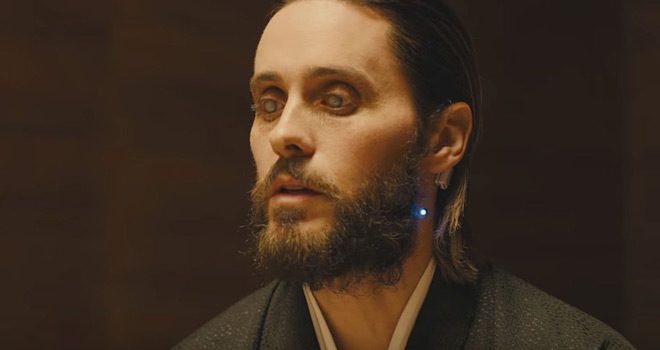 It would not have worked as well as it does without some good acting behind it though. Gosling’s performance makes K an engaging presence, shrugging off the pains of the world until his discoveries manage to get under his skin, and he manages to carry the bulk of the film’s 163-minute running time without trouble. Arnas’ Joi is also on top form as his closest confidante, loving and dedicated but coming off more as a partner than a toy. Though, the most powerful performance may go to Ford’s Deckard, who manages to pack in a lot of conflicting emotions – sadness and anger, pain and defiance – in a relatively brief amount of time.

However, it is the cinematography that makes the biggest impact. For such a dead dystopia, Roger Deakins (The Shawshank Redemption 1994, No Country for Old Men 2007) manages to make 2049’s L.A both ugly and beautiful at the same time. The city centre remains as dark and wet as ever, but it introduces new areas with distinct landscapes – the grey, ghostly farms, the horizon-wide piles of junk across what used to be San Diego, and the nuclear-yellow plains of a dead Las Vegas. It would be worth watching for that alone, just to see where the film would take the audience next.

It is hard to point out any serious negative aspects, but the man behind Wallace Corp, Niander Wallace (Jared Leto: Requiem for a Dream 2000, Suicide Squad 2016), is a downturn compared to the other performances. Acting-wise, he comes off more like a moustache-twirling villain than Joe Turkel’s Tyrell or Rutger Hauer’s Roy Batty from the first film. With simple ambitions, albeit with big implications, he does not have the nuance that K or Joi have. So, it is perhaps for the best that his appearances are sparse, retaining his mystique while his replicant Luv (Sylvia Hoeks: The Best Offer 2013, Berlin Station 2016) does the grunt work. 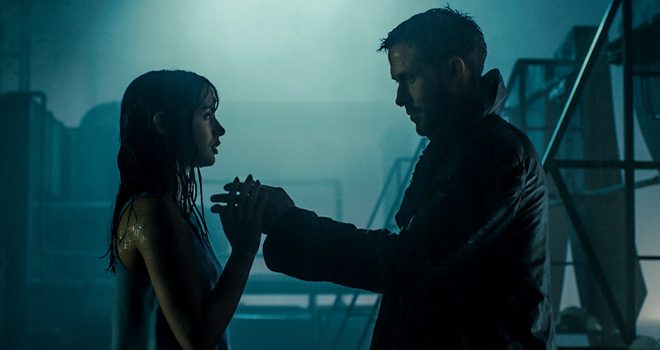 That said, whether it is from websites, magazines, or word-of-mouth, its praise is well-deserved. With its stunning visuals, special effects, acting, soundtrack, and story, Blade Runner 2049 is a must-see film for both fans of the Blade Runner series and people new to it. Alcon Entertainment’s bet has hit the jackpot with critics, and with hints of a sequel coming sooner than 30 years, they are liking their odds at the box office. For these reasons, CrypticRock gives Blade Runner 2049 5 out of 5 stars. 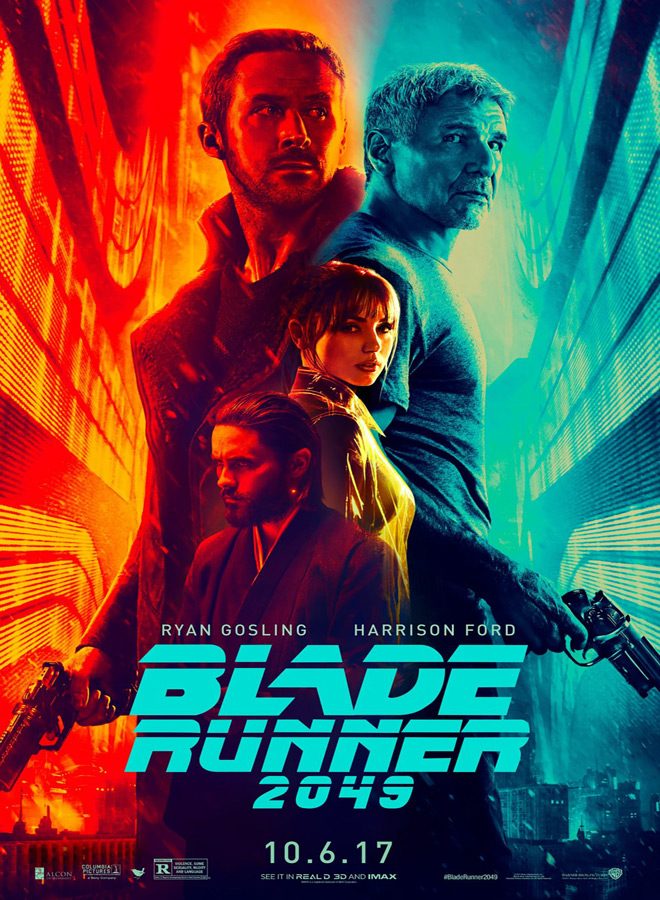