Imagine in two years, you are wealthy, elite, and looking to buy something that best illustrates your awesomeness. With a backdrop of dingy, fog-shrouded skyscrapers, and the glare of neon signs, you saunter home with your new swag – a live sheep.

Originally released via Warner Bros. back on June 25th of 1982, the seminal, Neo-Noir Sci-Fi Blade Runner remains a landmark in Sci-Fi 35 years later. Iconic Director Ridley Scott (Alien 1979, The Martian 2015) helmed the film, off Hampton Fancher and David Peoples’ adapted screenplay. Based on venerable Author Philip K. Dick’s 1968 novel, Do Androids Dream of Electric Sheep?, Blade Runner is now widely considered one of the best Sci-Fi movies of all time. It explores complex political, religious, and socio-economic themes against cutting edge, retro-fit visuals of Neo-Noir, or Future-Noir dystopia, and is well worth further reflection. 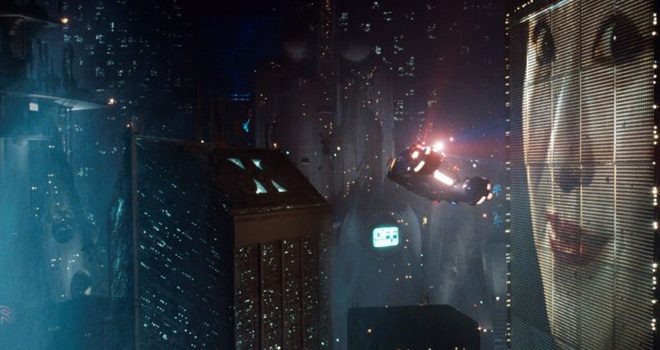 Harrison Ford (Star Wars IV: A New Hope 1977, Raiders of the Lost Ark 1981) stars as Rick Deckard, an ex-cop known as a “Blade Runner” whom is dragged back to his job for one last run. Blade Runners hunt and “retire,” or kill, androids known as Replicants that try to extend their lifespans by going rogue. Along the way, he must face what it means to be human, and finds the definition of life blurred.

Ford and Scott had an infamously bad relationship on set and could barely work with each other; though they buried the hatchet years later. A multitude of well-known actors starred alongside Ford, including Rutger Hauer (The Hitcher 1986, Batman Begins 2005), Sean Young (Stripes 1981, Ace Ventura: Pet Detective 1994), Edward James Olmos (Miami Vice series, Battlestar Galactica 2004 series), Daryl Hannah (Splash 1984, Kill Bill Vol. 1 2003), and James Hong (Mulan 1998, Kung Fu Panda 2008), among others. Olmos even created the iconic ‘cityspeak’ used for the film. 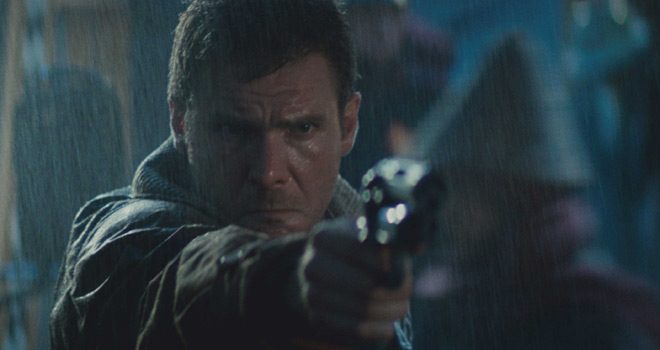 Upon release, Blade Runner received mixed reviews, with several critics decrying the sacrifice of story for style. When CGI was in its infancy, the film utilized practical effects at their most evolved, using only 90 effects shots. Most critics, even while panning the pace and convoluted plot, praised the visuals. It founded Neo-Noir style, with many franchises pulling from it, including 2004’s Battlestar Galactica series, the Ghost in the Shell anime franchise, and 2005’s Batman Begins. Screenwriter David Peoples’ 1998 film Soldier is a self-proclaimed ‘sidequel,’ based on a cut beginning in one of Blade Runner‘s early scripts.

To go further, Scott also confirmed that Blade Runner shares the same universe as Alien, which of course shares one with Predator’s, with Alien‘s Weyland-Yutani Corp, also in fan-favorite series Firefly, while also listed as one of the companies represented by Law Firm Wolfram & Hart in the Buffy series spin-off Angel, which means a SIX franchise shared universe! Oh, and when Deckard’s ‘spinner’ vehicle descends in front of the police station, you can catch the upright model of the Millennium Falcon, just to the left, used as a building facade. Fanficers, your buffet awaits.

Along with the film’s signature style, the soundtrack to Blade Runner mined the genius of electronic music pioneer Vangelis. His previous work, 1981’s Chariots of Fire, won the Academy Award for Best Score. Using synthesizers, chimes, and vocals, he lent a haunting dissonance to the film, which clearly influenced Sci-Fi movies through the ’80s and ’90s. Despite being nominated for 1983’s Best Original Score Golden Globe, the release of the soundtrack was delayed over a decade. The year 1994 saw an official CD drop of the “Director’s Cut,” which to that point contained the most recorded music from the film. In 2007, Blade Runner Trilogy: 25th Anniversary dropped, containing the 1994 disc, a second disc of previously unreleased music from the film, and a third disc with new music by Vangelis – inspired and in the spirit of Blade Runner. While waiting for an official soundtrack, some enterprising fans made and distributed high-quality bootleg cassettes at conventions. 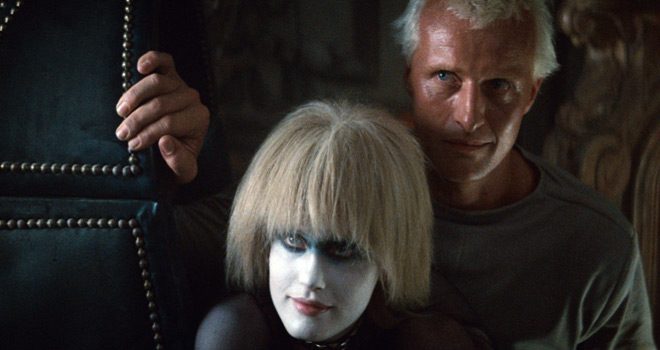 Beyond technical aspects, Blade Runner spawned video games, documentaries, and even books. Two video games released for the film – one in 1985 for the Commodore 64, based on the music of Vangelis, and the second in 1997 for PCs, which featured actors from the film voicing their characters. It directly influenced games like Perfect Dark and Deus Ex. Philip K. Dick’s friend K.W. Jeter wrote three sequel novels, in an attempt to conclude Deckard’s story and reconcile it with the original novel – Blade Runner 2: The Edge of Human (1995), Blade Runner 3: Replicant Night (1996), and Blade Runner 4: Eye and Talon (2000). The original novel, to note, never used the word ‘replicant.’

In addition, Marvel also released a comic of Blade Runner in 1982, with a spoof from their Crazy magazine imprint called Blade Bummer. Since, the film is referenced in numerous articles, spoofs, and collections. Several editions of the film have been released on home media, including a Director’s Cut that had little to do with Scott. Scott released his actual, definitive vision in 2007, entitled The Final Cut. Blade Runner suffered low ticket sales when released, but most of the them are attributed to going up against 1982’s box office juggernaut E.T. the Extra-Terrestrial.

Of everything combined, the most lasting legacy Blade Runner left is its philosophical treatment of themes and how its characters navigate through them. Critics of the era may have written it off because they focused too much on the effects. Nominated for a variety of awards, most in visual categories, it won six, the most prestigious being the 1983 Hugo Award for Best Dramatic Presentation. In the 35 years since, critics and audiences alike have realized and reveled in the eloquent complexity of story and deep richness of character development in the film. It sits at the top of many ‘Greatest Sci Fi Films of All Time’ lists, and hit number 11 on Empire’s 2014 list of the “301 Greatest Movies of All Time.” 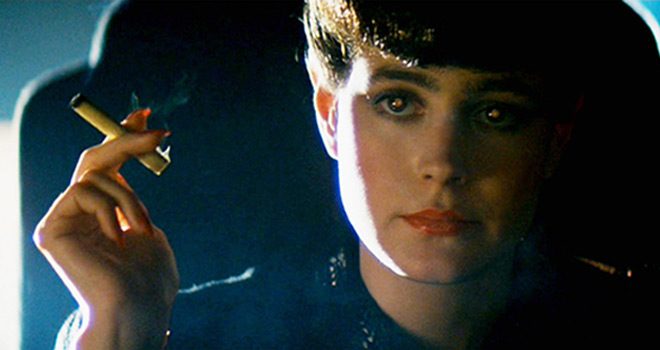 Still relevant, it also remains a visual extravaganza starring Harrison freaking Ford and crafted by one of the most acclaimed directors of the last forty years. Speaking of which, Ford returns for the sequel, Blade Runner 2049, due out October 6th, 2017. Directed by Denis Villeneuve (Prisoners 2013, Arrival 2016), and in development since 1999, the film will feature Ryan Gosling (Drive 2011, La La Land 2016) as new blade runner LAPD Officer K. anticipated, one can only hope it is half as good as the original.

As mentioned, only the upper echelons in Blade Runner can afford to have a living animal – the rest of humanity having to settle for animatronic replications. Consider then, the question of whether or not androids dream of electric sheep. Can androids dream? The symbol of the sheep, shed in the light of animals equaling prosperity, colors the worldview of the entire film.

Viewed as something deeper than actors and action on a screen, Blade Runner opens veins of possibility often only appreciated in hindsight and that is why it will remain a classic piece of Science Fiction for years to come. 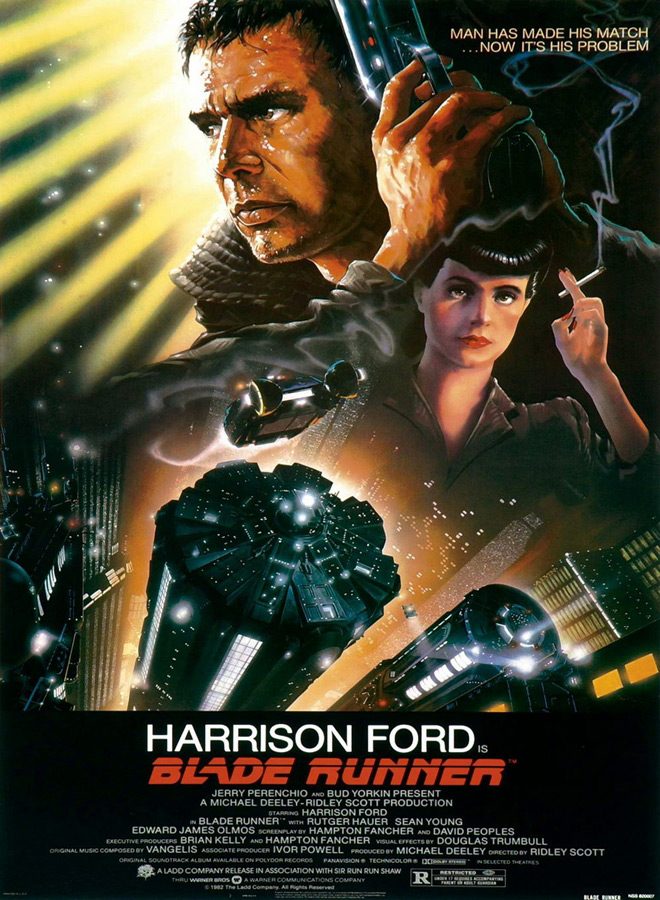