In a time of rabid negativity, it’s more important than ever to remember to celebrate the things we love. Doing just this, the sharp-dressed gentlemen of Blaqk Audio brought their brand of Electropop/Darkwave, along with friends Silent Rival, to the City of Brotherly Love on Saturday, March 30, 2019, for some underground entertainment.

Who are Blaqk Audio? You might have heard of Davey Havok and Jade Puget thanks to their day job in some Horror Punk band called AFI. When they’re not singing the sorrow, the pair have a multitude of projects to keep themselves busy and artistically sated, and, well, Blaqk Audio is one of these. Here, Havok holds down the vocals and suave dance moves, while Puget backs him up on synths, keys, and also provides backing vocals. The pair have been at it since their 2007 debut, CexCells, with additional releases including 2012’s Bright Black Heaven and 2016’s Material.

Just weeks ago, the duo delivered Only Things We Love, their fourth overall disc. In support of the album, Blaqk Audio began their latest headline tour on March 14th in San Diego, California, along with Los Angeles’ Silent Rival in the support slot. With the tour running from the West Coast through the Midwest and to the East Coast, stops included Phoenix, Seattle, Denver, Chicago, Detroit, Boston, and New York, before the tour’s final stop in Washington, D.C., on April 3rd.

On March 30th, Havok, Puget, and Silent Rival triumphantly held court at Philadelphia’s Underground Arts. A small venue on Callowhill Street, just blocks from Drexel University, Underground Arts is an under 1,000-cap venue with little in the way of frills. In fact, if clubs that fit the Punk Rock aesthetic are your thing, then this is your venue. A warehouse basement festooned with glow-in-the-dark graffiti-style art on some of its walls, the space is open and features a stage and a bar. That’s it, folks!

In the opening slot, Californians Silent Rival are a quartet centered around their sassy Lead Vocalist Sara Coda and talented Guitarist Joz Ramirez. A delicate blend of Indie Rock and Power Pop, the band took the stage at 9 pm to an already full crowd. Wasting no time and holding nothing back, Coda led her troops into a high-energy set. The enjoyable show kept heads bopping to the danceable beats of “Die A Little” and funky “Just One Voice,” along with several selections from their 2017 release, The Kindness of Strangers.  An as-yet-released track, “Lemme Have It,” fit perfectly with Coda’s witty lyrical changes that turned the song’s chorus into “Davey Havok.” Which admittedly caught the attention of the crowd, who were, on the whole, new to Silent Rival and their infectious material. 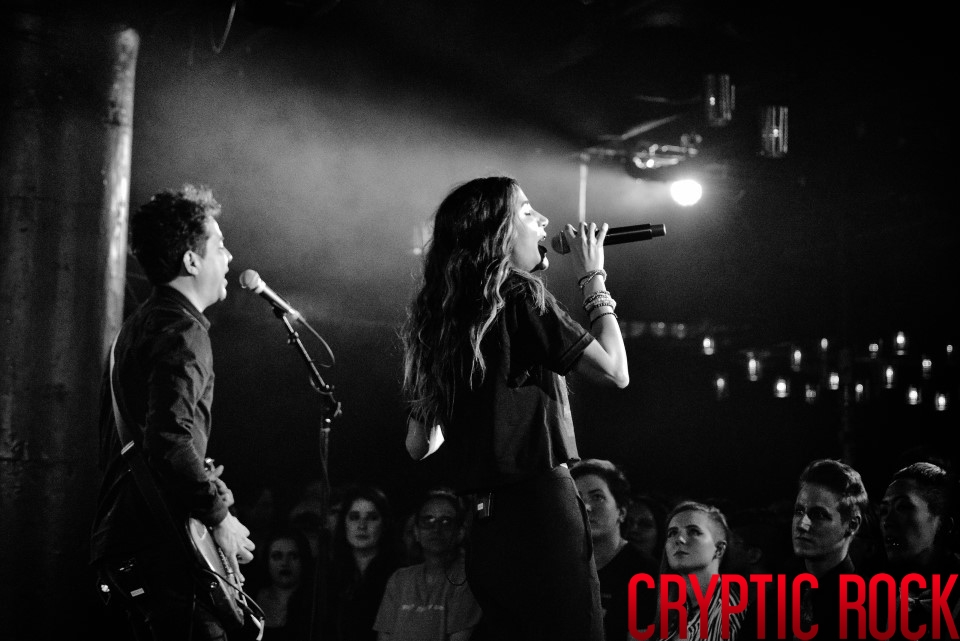 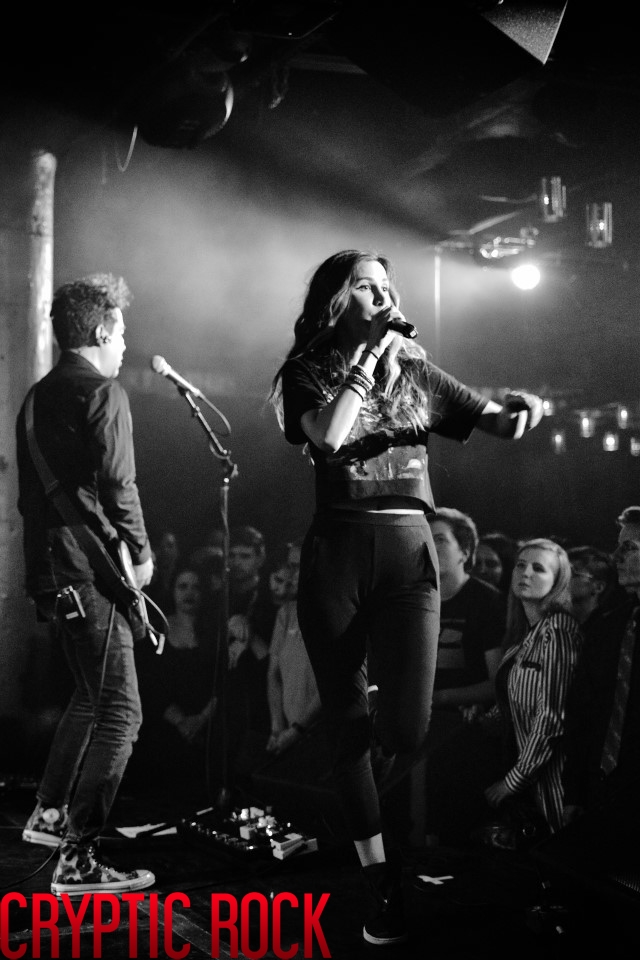 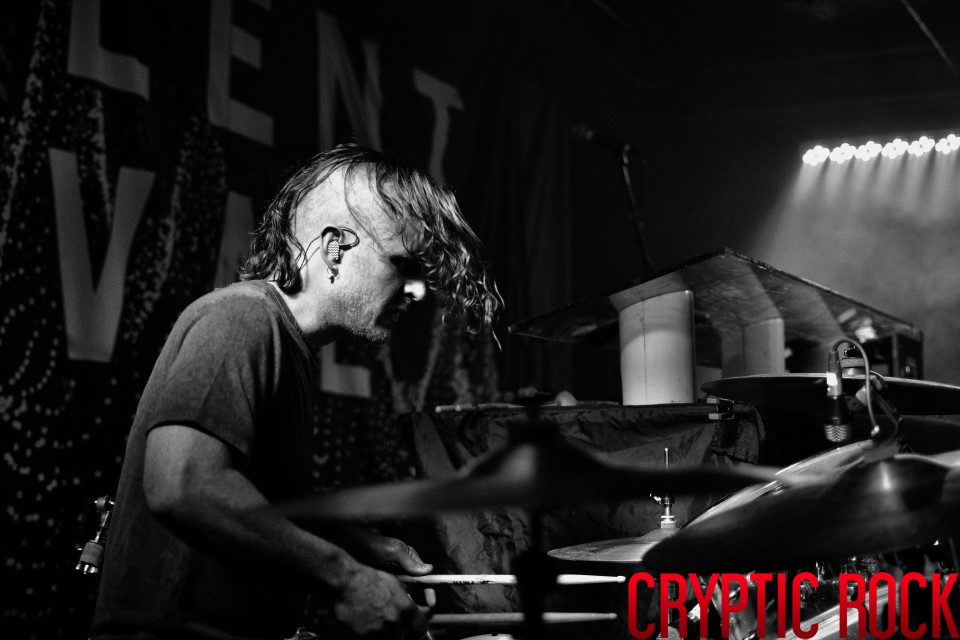 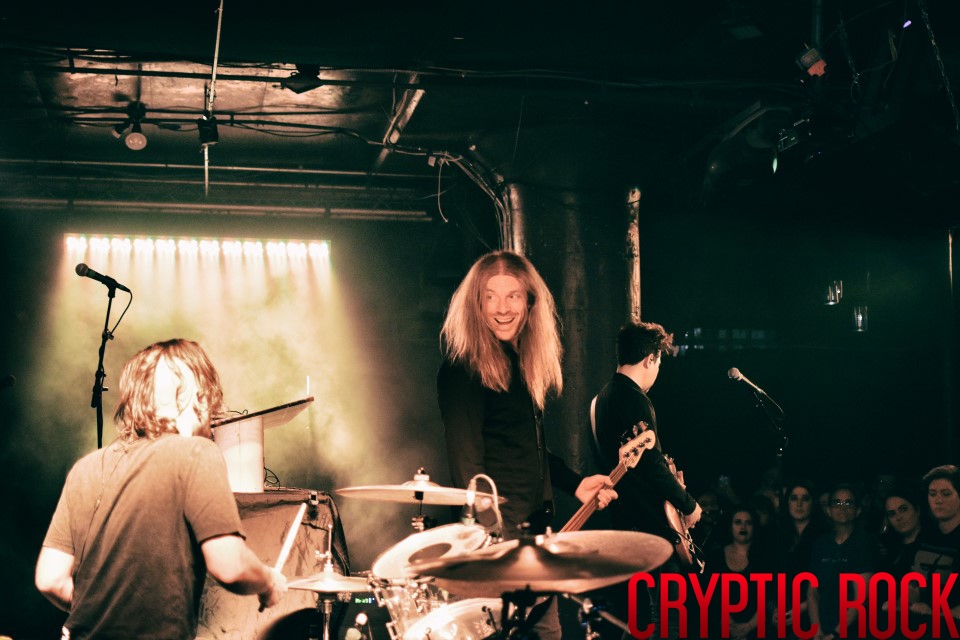 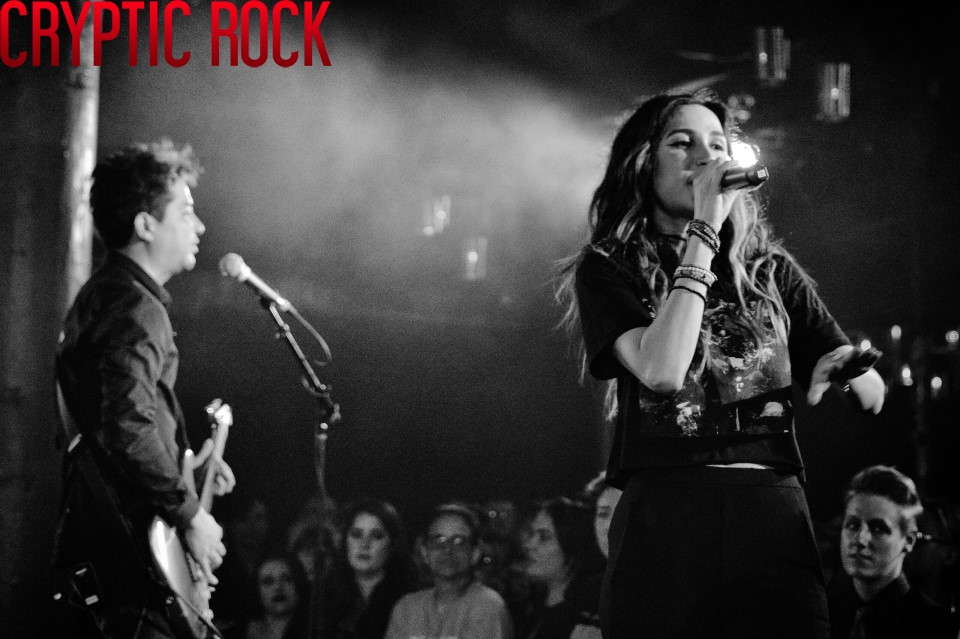 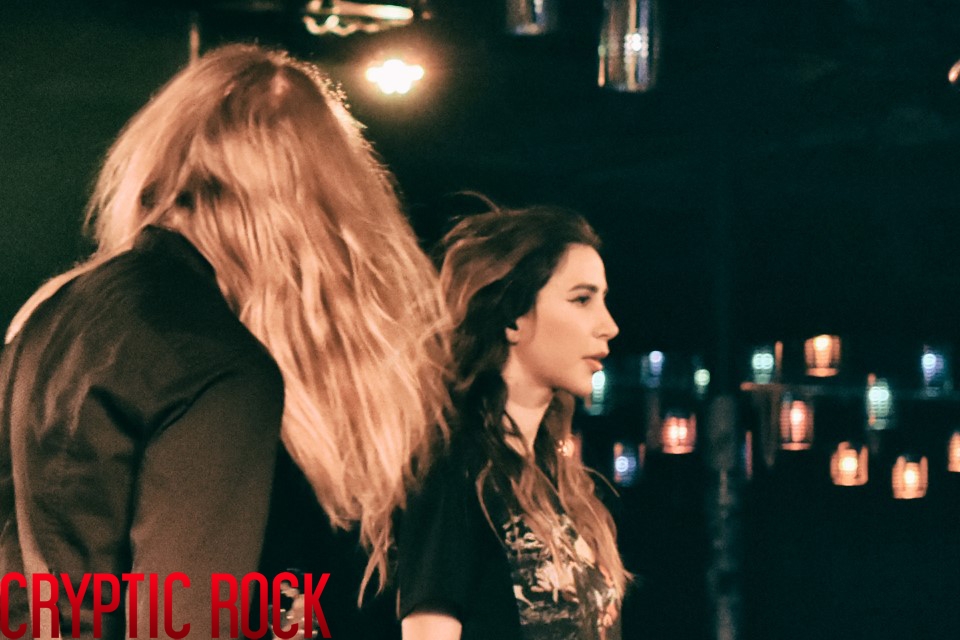 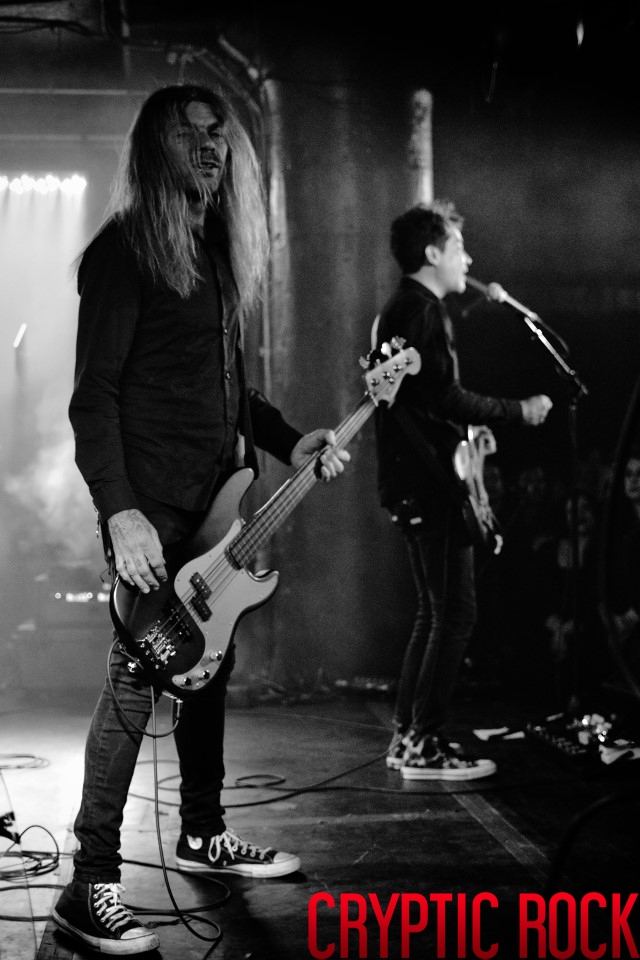 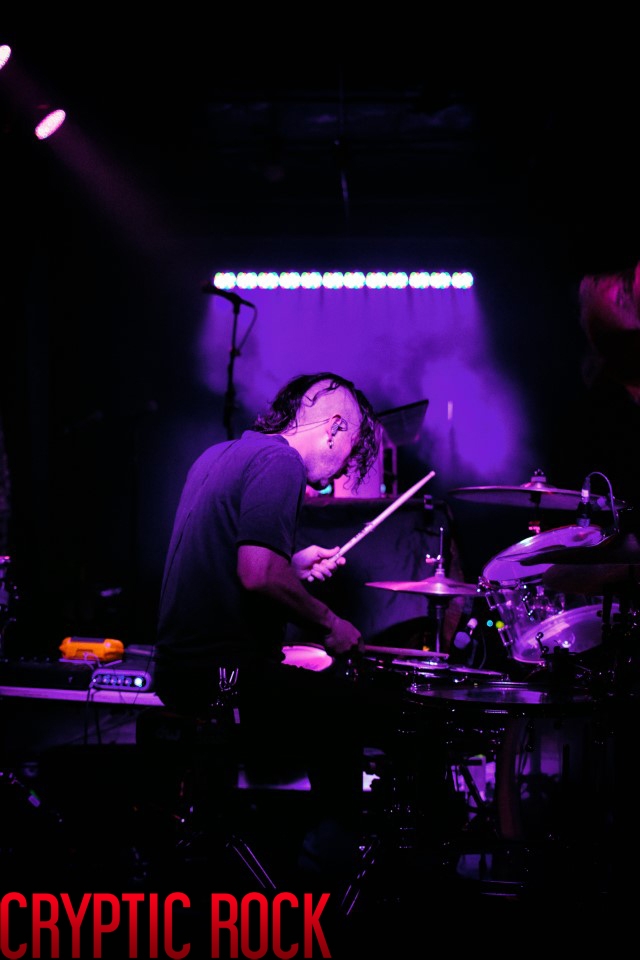 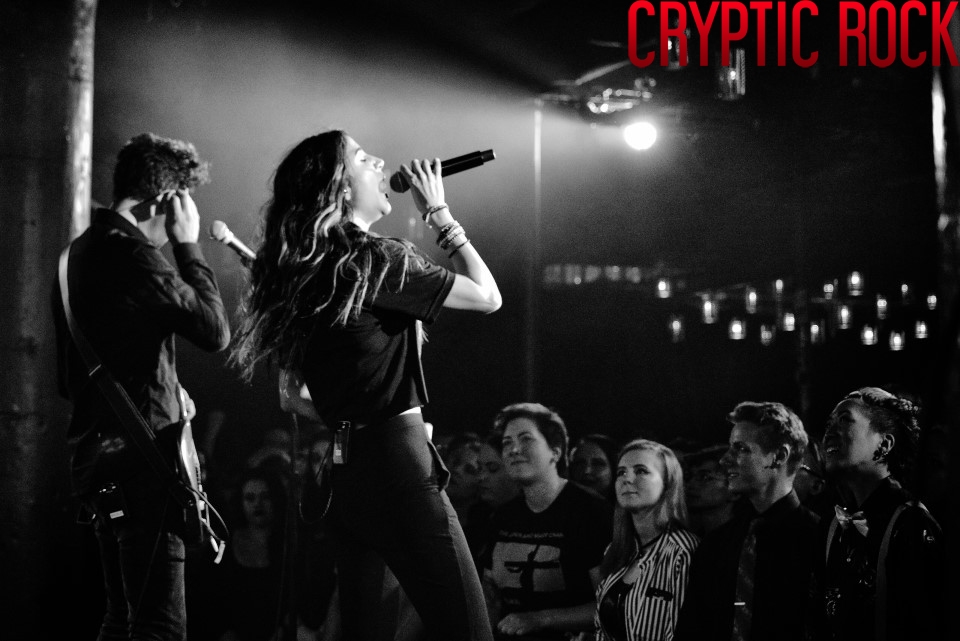 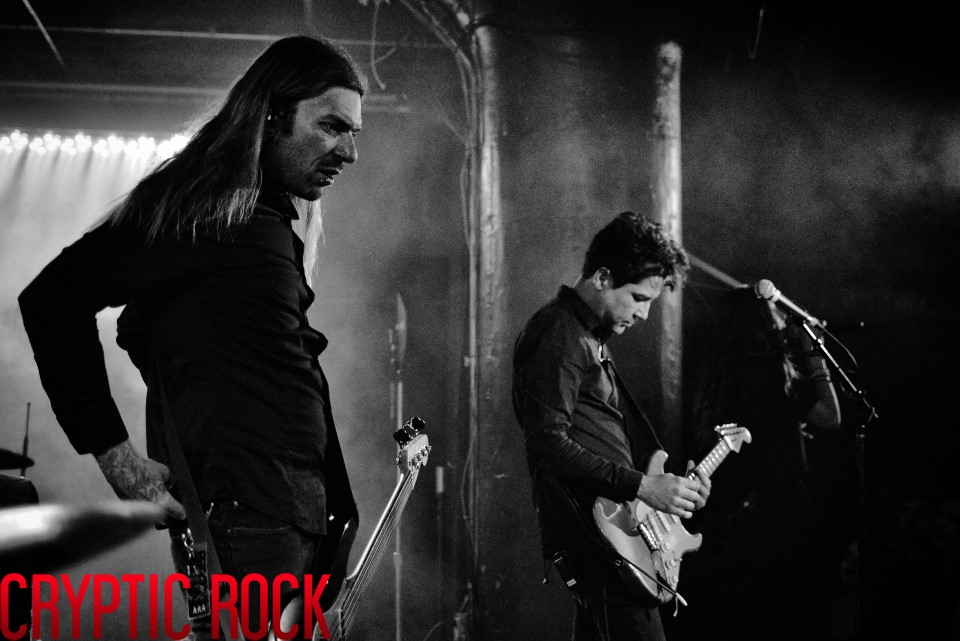 With the smiles permeating Underground Arts and Silent Rival having gained a new fanbase in Philly, the band left the stage to allow the audience to prepare for the main event. With anticipation thick in the air and the large crowd, many festooned in floral patterns that seemed to mimic the cover of Only Things We Love, swelling as the time drew near, ten o’clock signaled that it was time for some Blaqk Audio. Bathed in blue and purple, Havok and Puget took the stage to uproarious applause and cheers from their fans.

The pair’s 16-song set was full of dance moves, smiles, intimate sing-alongs, and, of course, passion. They began the evening with Material’s “First To Love,” which found Havok clad in a dapper ensemble that included slacks and suit jacket. This, of course, did not stop him from working the stage, dancing from right to left and engaging the entire crowd from the very first call of “Emily.” This flowed perfectly into the darker beats of “Waiting To Be Told” and “Anointed,” which featured some truly suave dance moves along with a trip into the crowd.

A joyous surprise, the crowd offered Blaqk Audio some of their loudest sing alongs of the night for a pair of brand-new songs, “OK Alex” and “The Viles,” both off Only Things We Love. Feeding off their energy and clearly thrilled at the reception, Havok launched into Bright Black Heaven’s “Deconstructing Gods,” providing a slower, more intimate moment that allowed his vocals to truly shine.

Two more new tracks, the darker beats of “Dark Times at the Berlin Wall” and ‘80s New Wave of “Unstained,” kept the set rolling. Turning the lights down and going for more intimate sing-along worthy moments, they broke out Materials’ “To Be Alone,” while CexCells finally got its moment with “Cities of the Night.” Continuing this down-tempo mood, Havok spent a moment alone in the spotlight, engaging with his beautiful things for “Material.”

When it comes to Havok, oh, he spins, he twirls, he goes into a zone and loses himself in the dance. A sharp-dressed man impassioned by his music, he often shuts his eyes and seems to go into a trance of feeling. There’s something freeing about an artist who can entirely shut out the world, a man who appears to dance and sing solely because he must. The impression being that, even if there was not a single soul in the audience, Havok would still be just as impassioned by his craft.

Puget is his less flashy, but no less talented counterpart. Holding down the beats and backing vocals, his moves are subtle, though he does dance to his own music. Seeming perfectly content to work his magic in the shadows, he provides the perfect complement to Havok’s swagger. In fact, speak of the devil, this sashay returned in spades for the fevered step of “Bitter For Sweet,” an epic sing-along.

As their set began to wind to a close, they brought out another selection from CexCells, ballad “Wake Up, Open the Door, and Escape to the Sea.” Creating yet another visceral moment, the crowd seemed to collectively sway to Havok’s vocals as couples exchanged tender kisses. This, somehow, coupled perfectly with one of the pair’s best known offerings, “Stiff Kittens.” With Puget dancing behind his MacBook, Blaqk Audio brought the energy inside Underground Arts to a boil before exiting the stage triumphantly.

It couldn’t be over though, right? Right! Returning to the stage for a short encore, Havok and Puget dipped into a deliciously upbeat cover of Dead or Alive’s 1985 hit “You Spin Me Round (Like A Record).” While they don’t have quite the same amount of hair as Pete Burns (RIP) once did, they rocked their take on the beloved favorite ‘80s offering and it served as the perfect segue into their grand finale, “Semiotic Love.” With the crowd clapping, cheering, and smiles all-around, Blaqk Audio capped off a fulfilling evening of sonic magnificence.

Sure, there was a bizarre, random fight in the crowd at one point, but the evening still managed to be a great time for all in attendance. Again, it’s hard not to note the passion that oozes from both Havok and Puget for their craft as they take the stage and lose themselves in every single nuance of their music. Few artists these days display such a dedication to their art, and for this and so much more, Blaqk Audio are impressive. Though this particular tour has ended, many more are guaranteed, and you’d be remiss to lose out on the opportunity to witness such a talented duo! 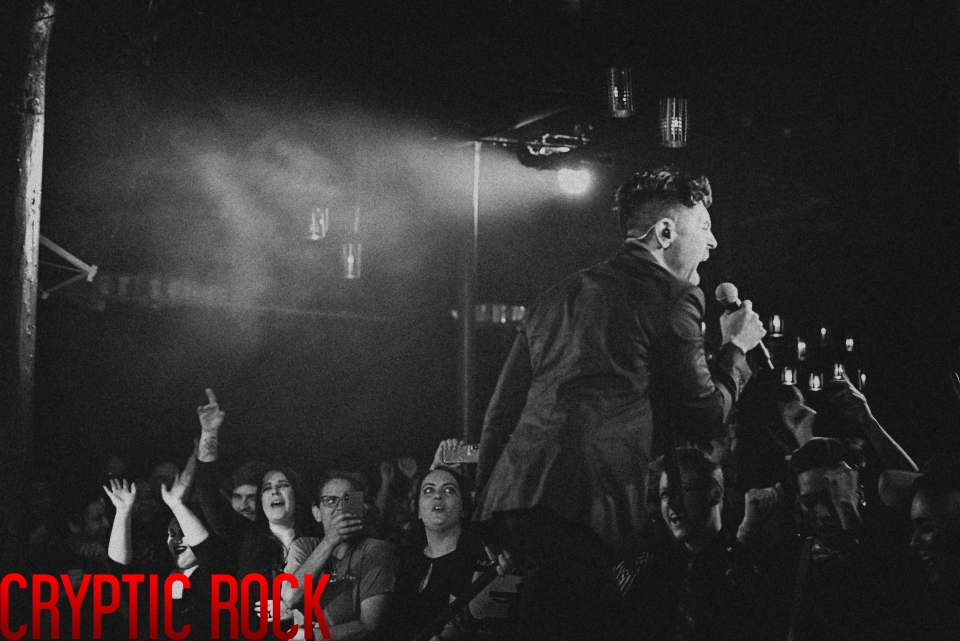 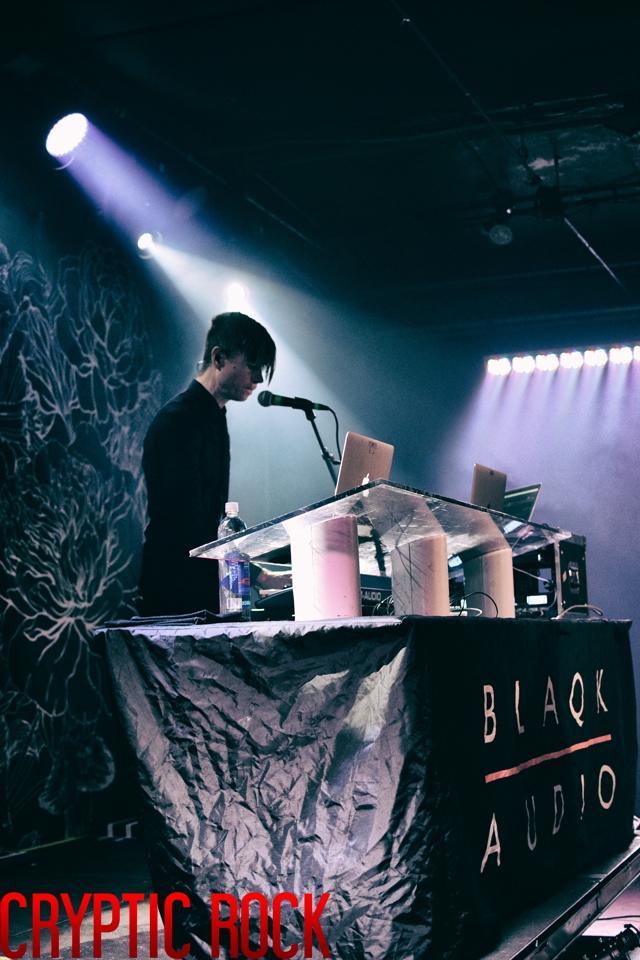 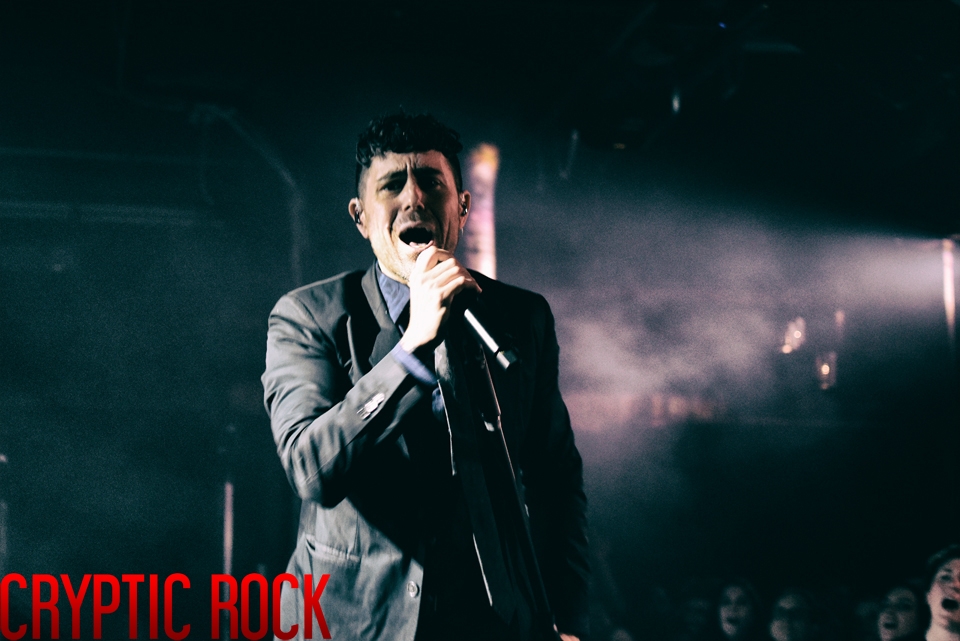 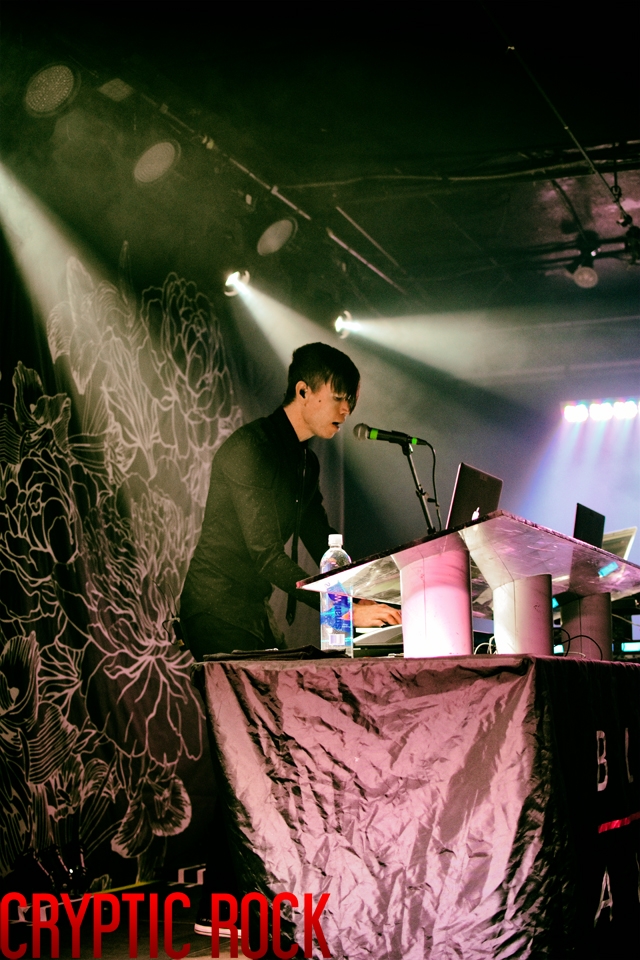 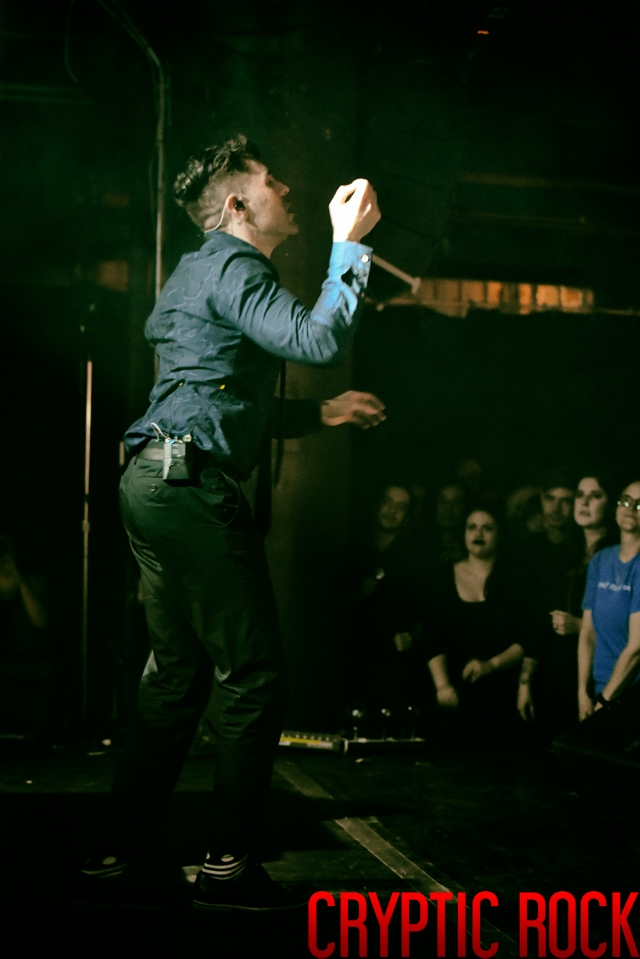 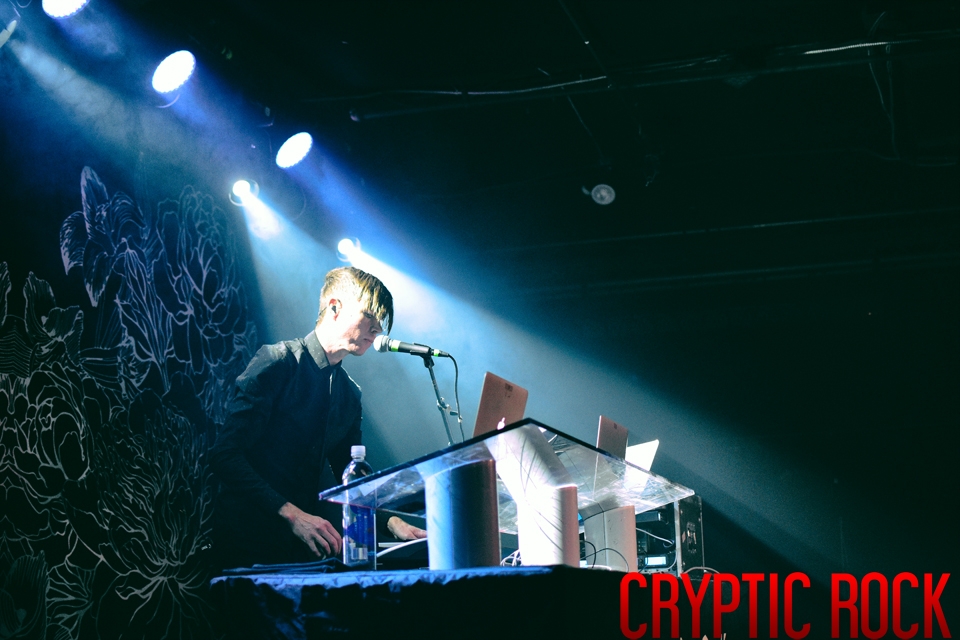 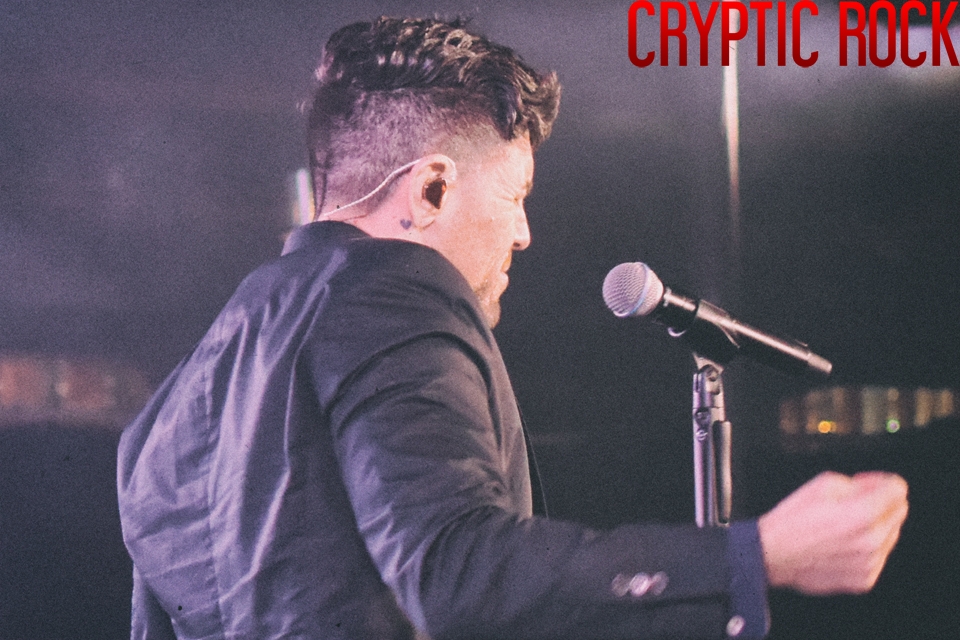 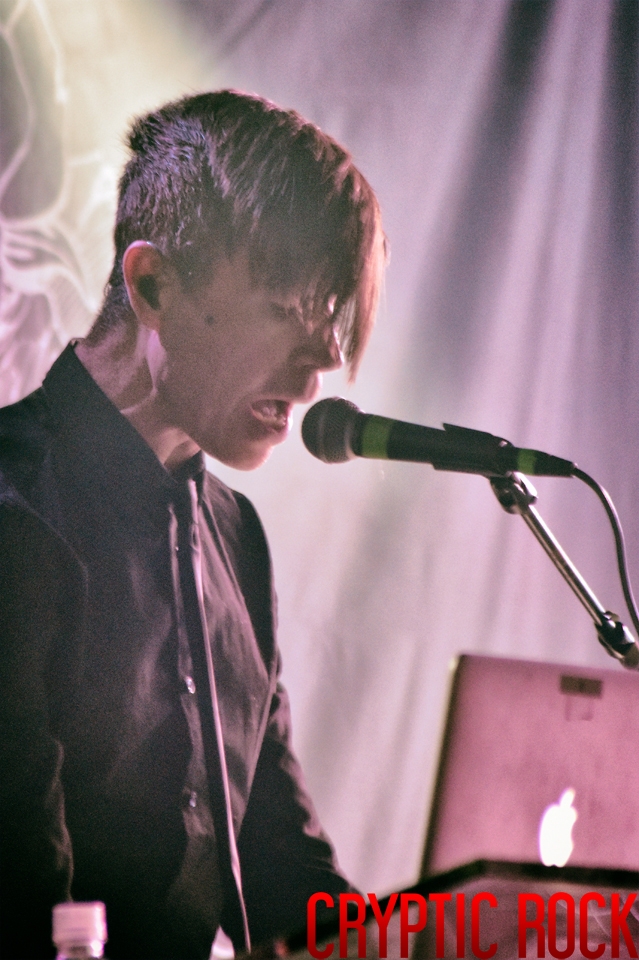 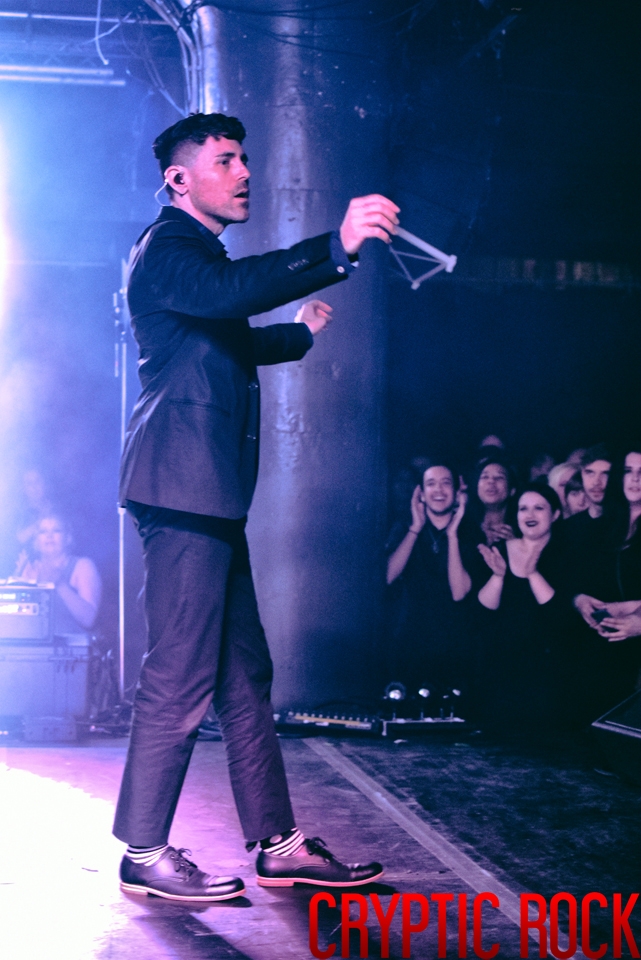 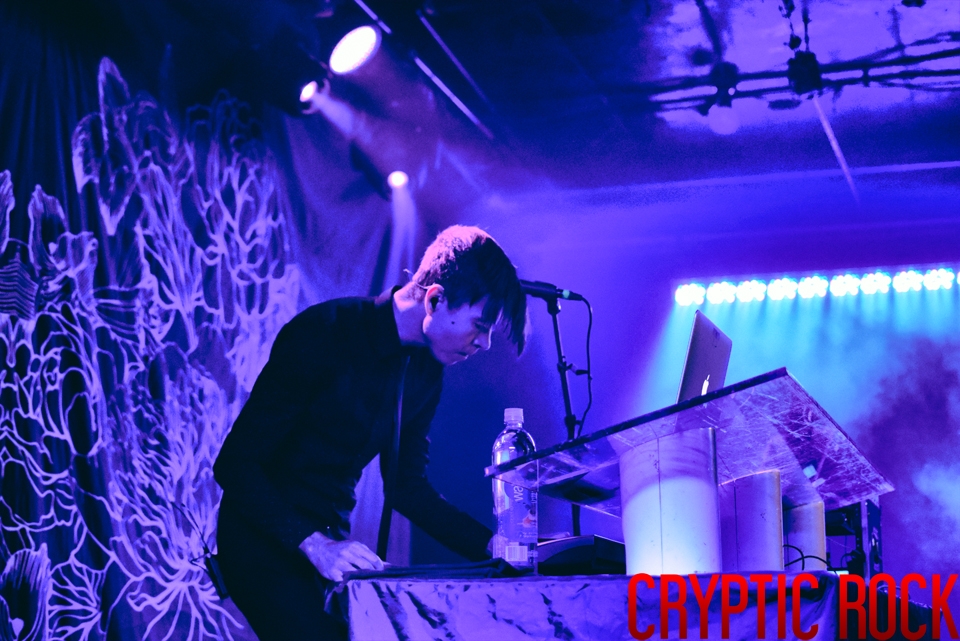 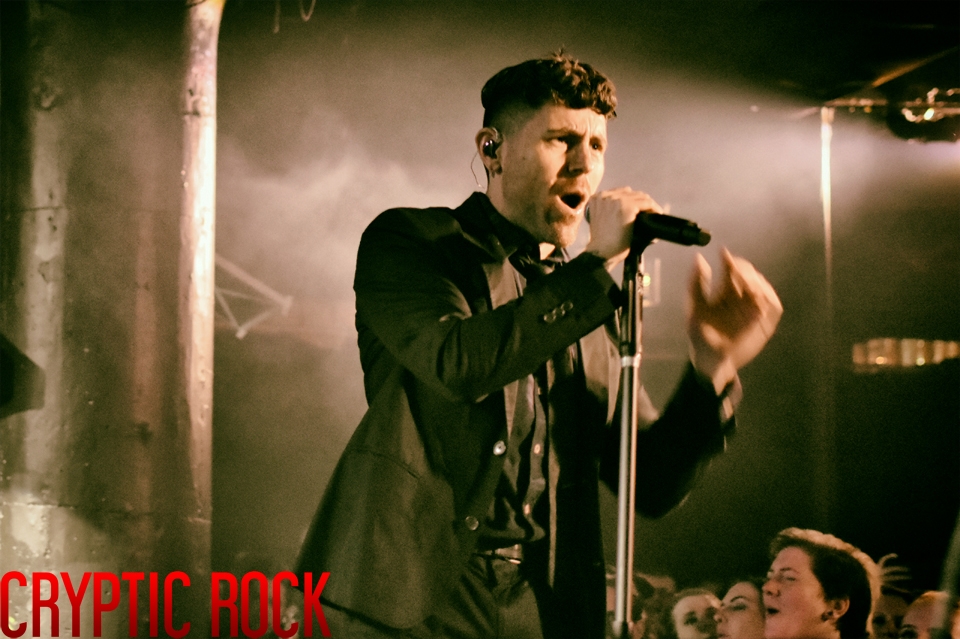 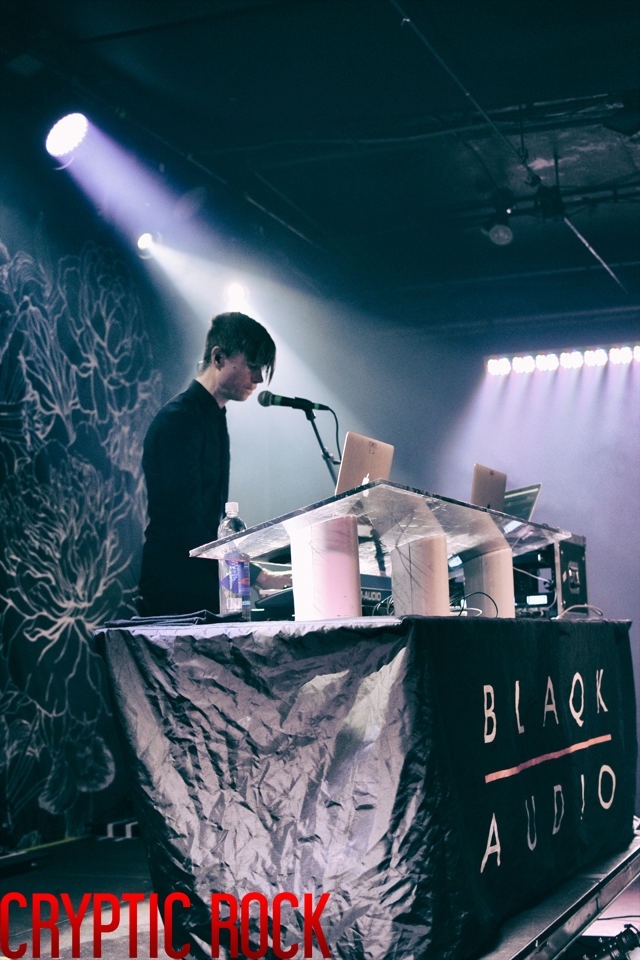 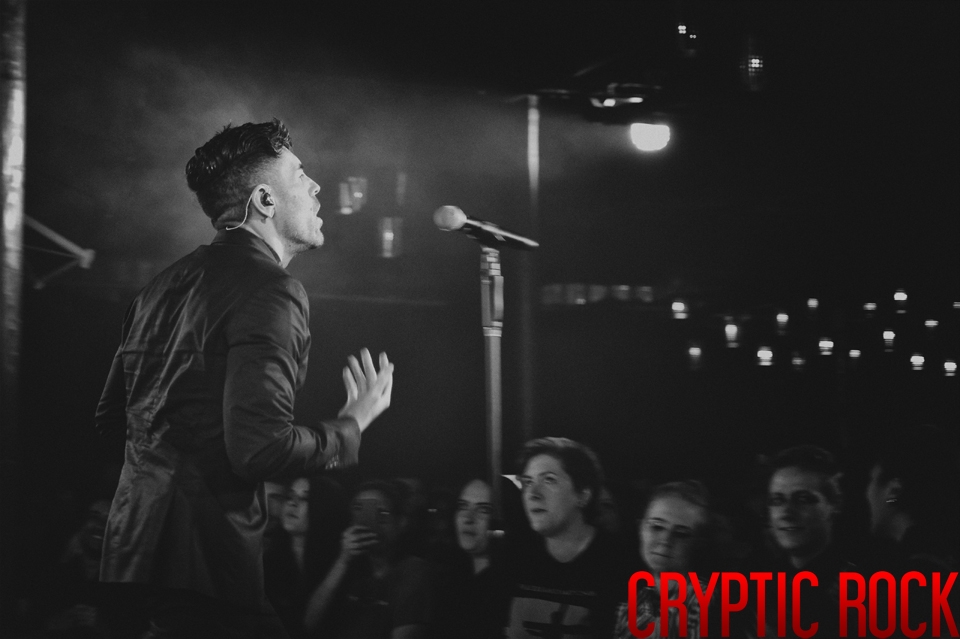 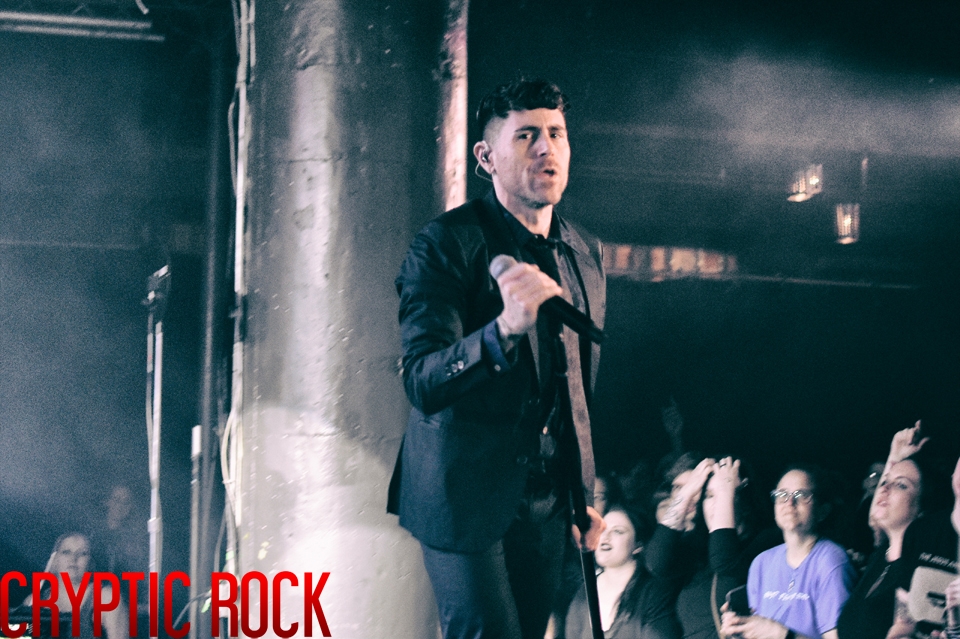 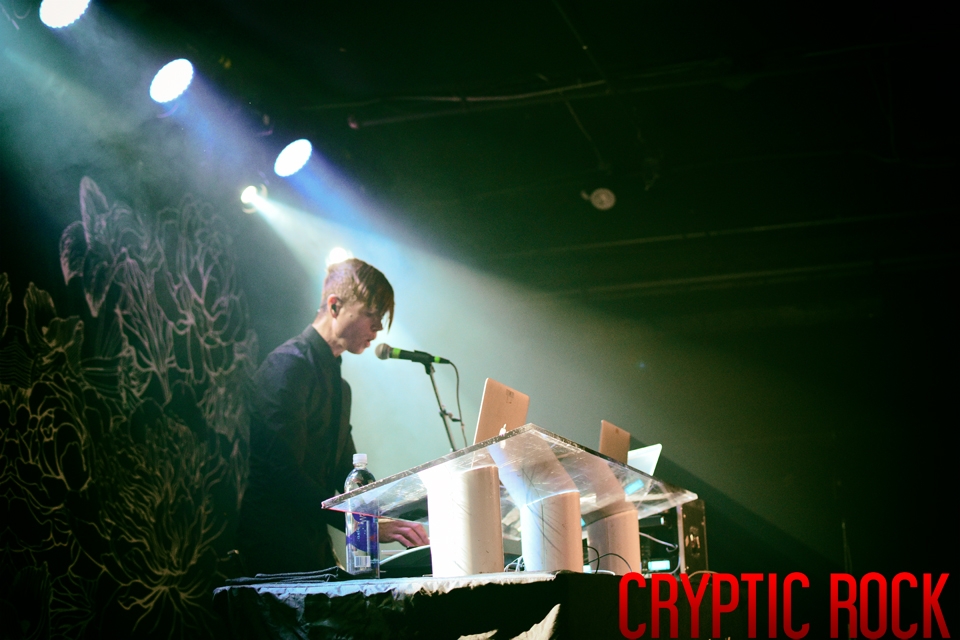 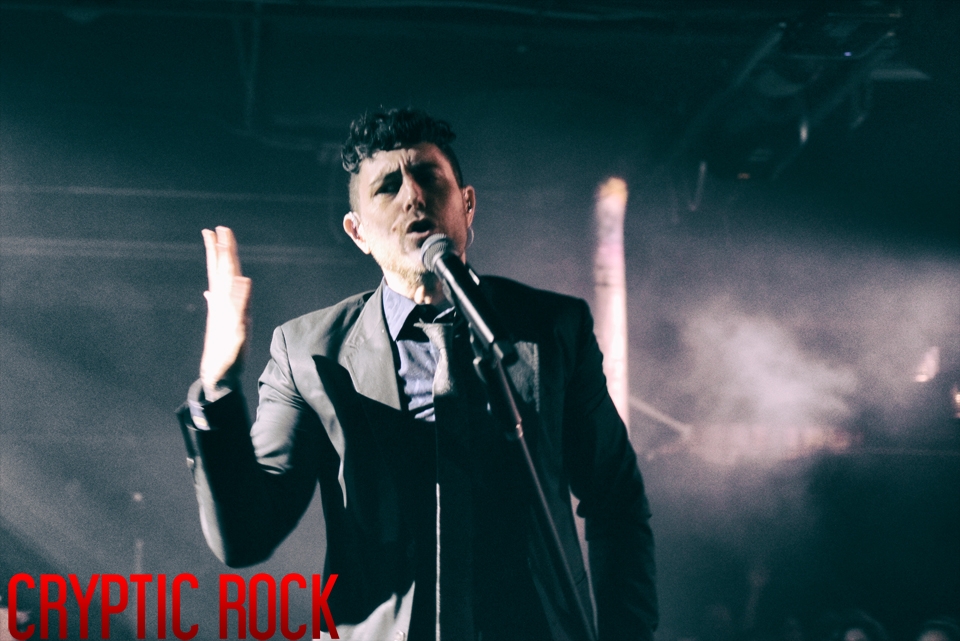 Purchase The Kindness of Strangers:

Purchase Only Things We Love: