One of the most exciting bills of the summer of 2017, on Saturday, August 5th, the Rage and Rapture Tour rolled through Raleigh, North Carolina featuring Deap Vally, Garbage, and Punk/New Wave icons Blondie. Supporting their latest album, Pollinator, which was released back on May 5th, Blondie are also celebrating over four decades, delivering the infectious tunes that brought them fame alongside a new stable of material freshly cultivated for the times. Meanwhile, Garbage join as Rage and Rapture’s co-headliner supporting their 2016 album Strange Little Birds. A run that launched back on July 5th, it wrapped up on August 14th down in Mexico City, but not before rocking venues such as Red Hat Amphitheater to the core.

On this particularly humid southern evening, the crowd gathered early to get settled in for the festivities ahead, and Los Angeles, California two piece rock outfit Deap Vally kicked things off with style. The LA duo opened up the evening with deep, resonating grooves and hefty percussion that echoed throughout tracks like “Royal Jelly” and “Smile More.” These ladies offered up a slow and smoky wind up for the evening, with their intense jams permeating the sticky North Carolina air. Out on the road in support of their last EP, Femejism, which was released September 16, 2016, Deap Vally queued up the groove for the crowd as the “Rage and Rapture” commenced.

When Garbage took the stage, the aura of the amphitheater instantly changed. There is something electrifying and enchanting in the way Shirley Manson takes a stage. She encompasses so much of it effortlessly while Duke Erikson (bass, rhythm guitar, keyboards), Steve Marker (lead guitar), and Butch Vig (drums) fill the air with the power source behind her presence. While there is no doubt that Manson and her fiery mane are showstoppers at any Garbage show, it would be remiss to ignore the dynamics of the band at large and that it is only because she, Erikson, Vig, and Marker are so good together that the magic happens onstage at all.

Even in an oversized black and white striped jumper, there is an inherent seductive quality to Manson’s performance while simultaneously feeling like a religious conversion. Manson’s approach this evening is that of a religious leader and the religion is love and acceptance. Her attention and interaction with the crowd is like call-and-response, singing hymns in which the congregation rejoices in the participation. Bowling through songs from their repertoire like “Sex Is Not The Enemy,” “#1 Crush,” “Empty,” and “I Think I’m Paranoid,” Garbage wasted no time delivering the goods. 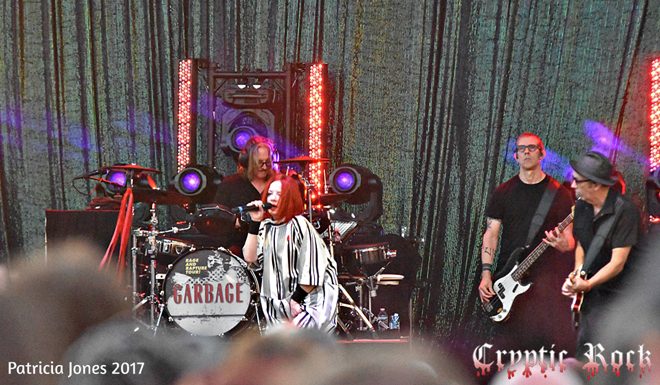 About a third of the way into their set, Manson announced that it was recently their lighting designer’s birthday, but they had not yet celebrated. So, she encouraged the crowd to join her in singing “Happy Birthday” to Aaron, the man behind this evening’s light show.

This is followed shortly by Manson noticing a fan’s bright pink, oversized sign stating it was her birthday and all she wanted was to meet Shirley. So, naturally, Manson hops down on the corner of the stage and beckons the woman forward so she can meet her and sign the poster for her.

After a stirring rendition of “Queer,” Manson decided to change the tone of things a bit. She jokingly announced, “Now we’re gonna play the darkest song we can, because we like to be party poopers” as they break out into “Even Though Our Love Is Doomed.” She follows this with a brief rendition of the story about how she met David Arnold for coffee and he offered her the opportunity to sing the 1999 James Bond soundtrack title track, “The World Is Not Enough” before breaking out into the song.

Exciting all the way through, Garbage winds down their set with “Stupid Girl,” a new mix of “Only Happy When It Rains,” “Push It,” before closing with “Vow.” One thing was certain after their set, Manson is a powerhouse of sensuality, rage, and harmony; a delightfully complex and dichotomous amalgamation of all things wonderful and weird. 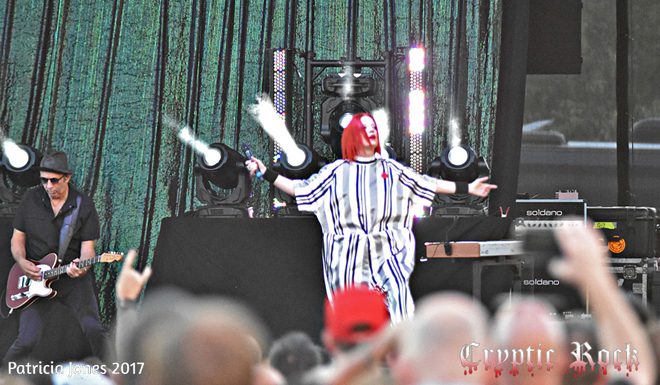 The final act of the night, Blondie has made their career on being unique and combining perspective others might never have considered. There is nothing different when it comes to their Rage and Rapture set. Combining old favorites with more timely new tracks, Blondie – Guitarist/Co-Writer Chris Stein, Drummer Clem Burke, and long time Bassist Leigh – and their fearsome front woman, Debbie Harry, kicked things off with a message: “Stop Fucking The Planet.” The message was printed on a black cape donned by Harry along with a pair of honey bee shaped head pieces placed like horns atop her head.

Ready to get going, Harry started their set by telling the crowd that their latest album, Pollinator, was dedicated to the bees and science, touching on the fact that several species of bees have joined a number of other animals on the endangered species list over the last three years.

From there, Blondie bounded into action with their 1978 hit “One Way Or Another,” prompting a crowd-wide sing-a-long and the jolt of energy needed to get this set on its feet. Harry is like a dinner party host welcoming you to her home. She smiles and waves and encourages audience participation at every turn. This is where she lives, the stage, and even at age 72, Harry still made it her mission to work every angle of the stage, often disappearing in the peripherals to wave and engage with fans on far ends. 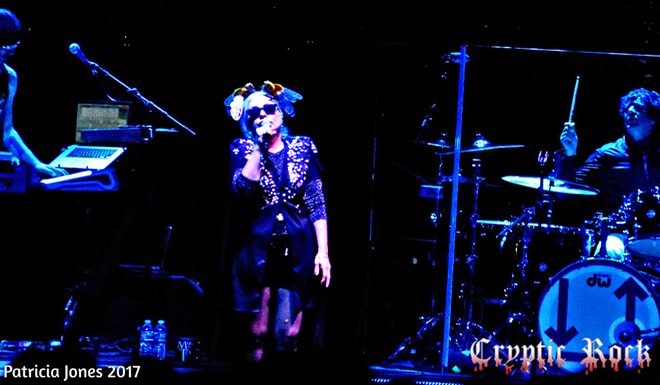 “Call Me” and “Too Much” brought more buzz to the room right as Harry and company set off into “Rapture.” Bobbing her way along through the 1981 New Wave Disco fusion hit single, Harry’s charm and ease make up for the slowed pace of the usually more high energy rap section in the song. There was a sea of people bopping and swaying with her and the guys as the nostalgia flooded the air like delicious scents from a nearby bakery. In fact, people could be seen outside the amphitheater on tiptoe trying to peer over or through the fences to gain even a peep at the new wave icons.

Backed by a whirling display of lights and illuminated visuals on backing screens, “Heart of Glass” saw the projections of anatomical glass hearts dancing and spinning behind the New York rockers as Harry reminded everyone in attendance of the presence in her upper register.

Closing out the night, Blondie rounded out their evening with encore performances of their cover of The Paragons 1966 hit “The Tide Is High” and “Dreaming” from their 1979 album Eat To The Beat. It was a fun, careless, and whimsical way to wrap up a night of wistful memories.

In many ways, Blondie is still a Garage Rock band in every way that counts – they are all heart, good vibes, and friendship. Despite working with some newer additions to the mostly original lineup, there is a camaraderie that reads in their performance that still makes them look like kids playing for love over profit. They are not over produced or dramatic, they are Blondie – pure, simple, and familiar – and it is that familiarity which makes them timeless. 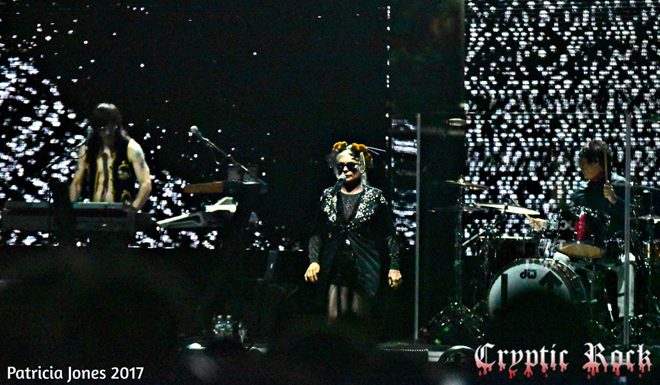