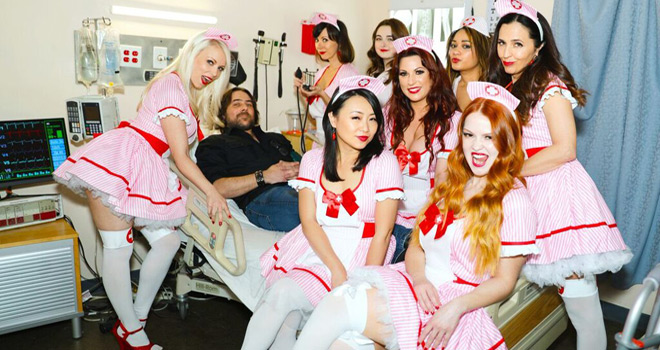 One of the worst things in this life is having a loved one fall ill and not having the power to help them. But what if there is something that can be done? What if the only person that can save your loved one is not the doctors or nurses, but you? What would you risk? What would you be willing to give up in order to save their life?

In Michelle Romano’s directorial debut, in partnership with Roman Media Inc., Blood Bride explores one man’s commitment to his saving his wife. A 14-minute Horror film, Blood Bride will be available for the world to see Monday, February 19, 2018 on the Twisted Twins Studios official YouTube channel.

Grant (Corey Tourigny: Creeps Creature-Feature 2011, Cuckoo For You 2018) is in the hospital helplessly watching his wife, Mrs. Grant (Michelle Romano: Milwood 2013, Escape from Ensenada 2017) deteriorate before his eyes from an undisclosed condition. He is worried and afraid he might lose her. In an attempt to calm him down, Dr. Baron (Robert Catrini: G.I. Joe: Retaliation 2013, Jack Reacher: Never Go Back 2017) pulls him aside and explains that the couple share a blood type. O Negative. O Negative blood is so rare that just over six percent of the entire population of the world has this type. It is the universal blood type; like liquid gold as it can be used for any person regardless of blood type.

This information does not register with Grant. He just wants to know what is going on with his wife. Dr. Baron wants to know how involved Grant is willing to be in order to save her life. Grant makes it clear that he loves his wife and that he “would rather die to save her life than go through the rest of (his) without her.” After consent forms are signed, Nurse Betty (Jennifer Jostyn: House of 1000 Corpses 2003, The Life Coach 2005) leads Grant away with promises that what they are about to do will save his wife. But what exactly is wrong with Grant’s wife? What did Grant consent to do? What does Grant’s blood type have to do with anything?

The short is serious yet campy in nature. Grant’s dying wife and his obvious distress over this fact immediately pulls at the viewer’s heartstrings. No one wants to be watching their spouse or anyone else they care about dying and not able to do anything about it. Tourigny’s portrayal of a devoted husband is passionately convincing. It is not until the appearance of Jostyn’s Nurse Betty that the viewer realizes something is not quite right. Why would a nurse be wearing what appears to be a store bought sexy candy stripers costume? It is even more puzzling that she is behaving not like a nurse, but a stripper seeing Grant as a willing customer. The two opposing personalities creates a bizarre and uneasy feeling that is only stripped away at the possibly unsettling conclusion of the film.

Blood Bride is one of the collection of shorts for the Soska Sisters Annual Massive Blood Drive PSAs. Raising awareness through Horror is the goal of the short. Though it is promoting a very real and serious cause, the film does not shove the idea down the viewer’s throat. The importance of blood is heavily present, but it is shown in an organic way. There are no lectures here. Just a good story framed by an even better cause.

The Blood Bride Horror Wrap Party happens on Thursday, February 22nd at LONO Hollywood back Terrace Area. It is a cocktail/Horror theme party. The event starts at 7pm and closes out at midnight. It is free and open to the public while there will be cast and crew of the film in attendance as well as members of the Los Angeles Horror community.

Sometimes it takes films two hours or more to get to the point that could have been achieved in much less time. Blood Bride successfully gets the point across (Donate Blood! Because you can actually save a life!) in the span of a mere fourteen minutes. It is fun and informative. It is definitely worth a look if a little free time is found. For being entertaining and part of a good cause, CrypticRock gives Blood Bride a rating of 4.5 out 5 stars.