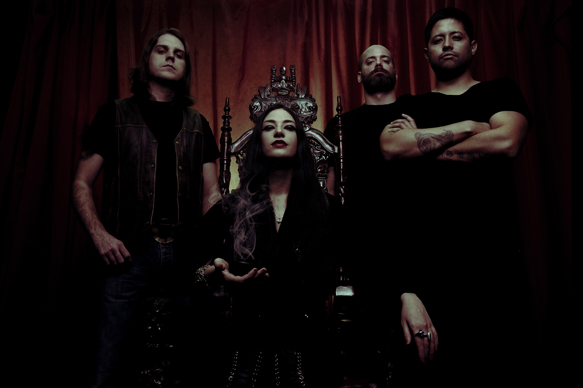 Dubbed one of “Toronto’s Most Original Bands,” Canada’s Blood Ceremony has come a long way in the past decade. Naming themselves after the 1973 Spanish Horror film Ceremonia Sangrienta, one about a woman who is a descendant from a countess that used to bathe in the blood of virgins while young girls are found in the area drained of blood, the band was born in 2006 when primary Songwriter/Guitarist Sean Kennedy founded them. Through some early changes, Alia O’Brien took over as Vocalist, Flutist, and Organist, followed by Bassist Lucas Gadke coming on in 2010 and Drummer Michael Carrillo in 2012.

Debuting on Rise Above Records in 2008 with self-titled full-length album, Blood Ceremony immediately made a splash in the Goth/Doom Metal scene by fusing the ’60s-’70s psychotropic voice with the weightier sounds of Doom Metal. Following up in 2011 with Living with the Ancients and in 2013 with The Eldritch Dark, the band incorporates instruments that were popularly used in ’70s Progressive Rock, such as flute, and bringing a whole new twist to old genres of music such as Metal and Folk. Tying everything together, their lyrics tell amazing stories using Pagan ritual imagery. Often, their stories are taken straight out of Horror films and fictional works, usually at the inspiration of Kennedy. Although, Lord of Misrule, set to release March 26, 2016, is a story about the very real Saturnalia festivals of the late Antiquity period. Marking their fourth overall studio album, Lord of Misrule sees the return of production by Liam Watson (The White Stripes) and was recorded at Toe Rag Studios in London, England for nine tracks of new music bound to enchant listeners.

Starting the album on an energetic kick is “The Devil’s Widow” with gravelly guitars and a fast flute rhythm. Then there are ’80s style female Rock singers channeled in to this track with the ferocity of the vocals with a hint of rough passion. A simple tambourine beat pulls all of the instruments together to tie the overall sound up nicely. Around the five minute mark, acoustic guitars slow the tempo down to emphasize lyrics before picking back up with the intro guitar-and-drum duet and progressing back into the gravelly main beat. The next track, “Lorely,” lends the listener straight to the ’60s beach scene with a boppy, but simple organ intro and a sleepy guitar piece. The drums of Carrillo complete the carefree beat by echoing various instrumental pieces of the song. Whether the drums follow the vocal beat, guitar, or organ, they give strong roots to the song. The outro organ solo blends subtle carnival music with notes of black-and-white Horror film scores.

Moving along, “The Rogue’s Lot” begins ominously with heavy guitars and a supporting drum line. The flute starts out slowly, but then quickly builds to a rhythm that matches the rest of the song, adding a dramatic flair. Fierce vocals return, reinforcing the solid feel of the track. Then choir-like vocals start the title track, “Lord Of Misrule,” and dive into an aggressive and dynamic melody. Alternating with the strong beat, heavy guitars and drums change the feeling into one of a dire situation approaching. Vocals of O’Brien ring out the lyrics, “It’s 4 o’clock and getting on to dark / there’s a feast of fools in the back of the yard,” telling the story of the Lord of Misrule before a wistful guitar ends this track on a downbeat.

Coming on with a vintage guitar tone and flute for accented texture, “Half Moon Street” is a track that evokes the freedom of cruising down the highway on a motorcycle, with open road as far as the eye can see. Quiet background chanting adds to the fervor of the beat, even as the track is slowly fading out. Thereafter, “The Weird Of Finistere” begins with an absolutely haunting flute and guitar duet. Carrying on with the smoky sense, clear vocals give a cautionary tale quality to the story being told. A Pop feeling pervades “Flower Phantoms” right from the beginning. Echoing vocals add a ’60s Rock sensation along with the guitar riff that could transport the listener to a Jimi Hendrix show. The drum line, and use of the tambourine, model the cadence style found in ’60s Pop songs.

Back with a more distinct Rock sound, “Old Fires” opens with the rugged guitars prevalent on many tracks on this album. Spirited, impassioned vocals keep the energy going and an intense, underlying organ part pushes this track even higher. The last track “Things Present, Things Past,” begins with a dusky, acoustic number while soothing vocals reminisce of times passed. The flute piece weaves around the lyrics and other instruments gorgeously, as if filling in lyrics unsung. The mood of “Things Present, Things Past” makes the song no less than a perfect ending to the album.

Overall, Lord of Misrule feels like the authentic Blood Ceremony sound. Kennedy’s vision for the band is upheld with tried and true techniques, and this band has the talent they need to continue to push the envelope. Blood Ceremony has a way of marrying each of the aspects together to create a unique sound with the flexibility to explore different facets from the inspired genres, as evidenced on Lord Of Misrule. Veteran fans will not be disappointed with the fresh spin on music from their youth, while newer listeners will easily appreciate the level of talent featured on these tracks. CrypticRock gives this album 5 out of 5 stars. 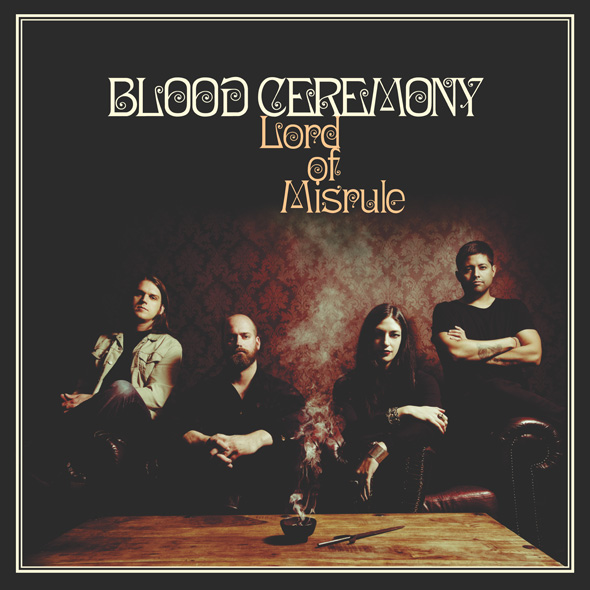