There were over three-thousand movies of all different types and genres released in the year 1987, including bigwigs: Predator, The Princess Bride, and Robocop. Then there many who flew slightly under-the-radars, such as Evil Dead II, Near Dark, and The Hidden. Some of these movies went on to be box office smashes that had spawned a few too many sequels while others were not so lucky. However, there were a select few which went on to become cult classic hits practically overnight. In fact, right smack dab-in-the-middle of all those movies was the needle in the haystack, Lightening Pictures’ Blood Diner. A household name among movie watchers years later? No. An adored quirky, obscure Horror flick for avid fans? Absolutely! 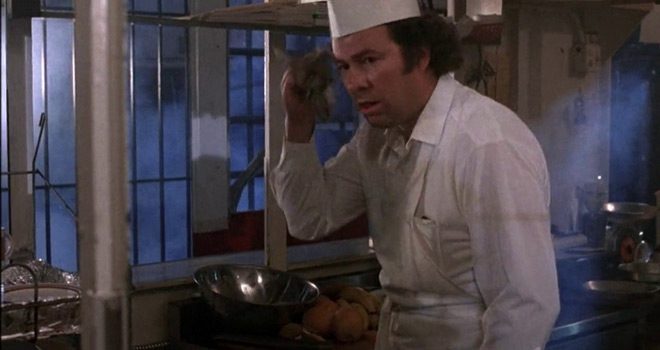 Thirty years ago, Blood Diner had a limited theatrical-run on its July 10th release date, and, apparently, made so little, financial earnings are hard to find. Swooping in for the rescue was Lightening Pictures big brother Vestron Pictures which released Blood Diner onto VHS-format later that same year. Here, Blood Diner found its audience among many die-hard video-store goers: the ones that would spend hours in sheer ecstasy, seeking out the cheesiest Horror flick to perfectly complement a night-in with friends and a bucket of over-buttered popcorn.

What happened next, is that this little needle had grown to the size of a crocheting hook. With this hook, it slowly pulled more and more viewers together, forming a blanket—or scarf, rather—of cult-followers of one of the smartest and funniest, and the most cheesiest Horror/Comedy movies out in the industry today. And, although many other films could be included in the latter’s list (think Troma Films), hardly any could compare to Blood Diner.

The movie begins with two young brothers being made to promise to resurrect a 5-million-year-old Lumerian goddess called Sheetar by their lunatic, occultist uncle, right before a police squad shoots him dead. Twenty years later, the brothers have “matured” into adults, and now own a thriving “veggie” diner which contains a menu full of questionable ingredients, and many customers who adore the food. The brothers also exhume from a grave their uncle’s corpse, whose brain they take and is kept in a jar full of water—along with a pair of eyes. Through an incantation spell, however, the two brothers are able to converse with their late-uncle’s brain-thing, who gives orders of what is needed for the resurrection of Sheetar. The most important thing needed in order for the brothers to raise her from the dead, is to gather body-parts from various women to form the perfect vessel for her arrival; and in doing so, goofy chaos and splatter-y slapstick ensues. 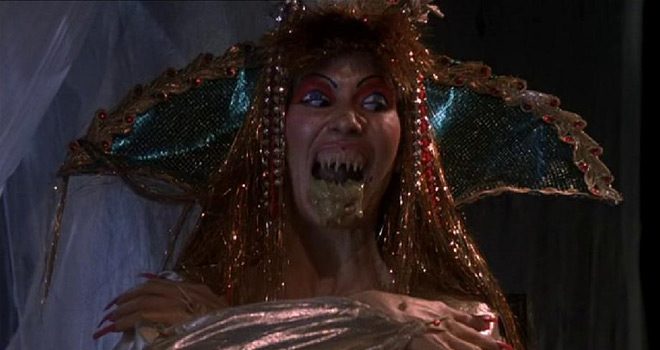 One fun film, the team to thank for bringing Blood Diner to life is Director Jackie Kong (The Being 1983, Night Patrol 1984) and Screenwriter Michael Sonye (Frozen Scream 1975, Cold Steel 1987). Because of Kong’s visual style, her confidence, and her imagination, she made an endearing movie not meant to be taken at all seriously, but easily loved. Blood Diner is too goofy to be considered a full-blown Horror film, and is not at all suspenseful—nor does it contain any jump-scares, for that matter—but what it does have are many outrageous, laugh-out-loud death-scenes, crazy amounts of dismemberment, and plenty of nudity.

The special (practical) effects are another reason Blood Diner is so goofy-good. Every little penny leftover to make this movie was used to make fake limbs, eyes, and whole-body-stuffed dummies, but this “cheap” aspect is what gives the movie its heart and soul (and fingers). The acting skill of the entire cast is purely genuine in how much feeling and conviction went into the goofy and gory material of Sonye’s script, and is ridiculously better than anyone could imagine from a cheesy “Horror” movie such as this.

The dialogue is full of hilariousness spoken by stone-faced actors in a serious, “this could happen”-type of tone, which just adds more to the quirkiness. What is even better is how the extras can be seen having a great time behind their scenes with the main actors. Each scene is an absolute attention-grabber, and is nary a bore to watch. This mix of smart, goofball Comedy and bloody-gory-goodness is what makes Blood Diner a sleeper hit. 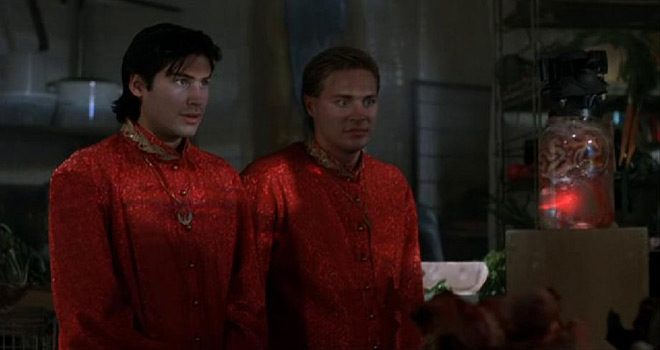 Rounding off some key players of the cast is Richard Allen Burks (The Underachievers 1987; Wicked Stepmother 1988) who plays older brother Michael Tutman, a master of hypnotism and getting things done; and Carl Crew (Gross Out 1990; Jeffrey Dahmer: The Secret Life 1992) playing as George Tutman, who is a wicked-good cook, and a huge fan of wrestling. Burks and Crew may not look like brothers on the big/little screen, but they sure as heck act like they are. Their brotherly-love is another endearing touch on such a goofball of a movie. Then there is Uncle Anwar Namtut (Drew Godderis: Evil Spawn 1987, Deep Space 1988), who does a sick job playing a sick-in-the-head person, and is hilarious in his voice-over work for his part as the “brain in the jar.”

Although Burks had small tidbit roles in movies and music videos (one, being in David Bowie’s Day-In, Day-Out) after Blood Diner, he sadly passed away in a car accident back in 1989. Crew, on the other hand, wrote and starred in a few films, here and there, such as 1994’s Urban Legends. In 1993, however, he had a bout with controversy after the release of his Dahmer film, which upset the families of Dahmer’s victims who had claimed the movie was pure exploitation of a drastic time, and who also protested to have the film banned. Crew, as of late, helps run a North Hollywood nightclub/museum called California Institute Of Abnormalarts (CIA). 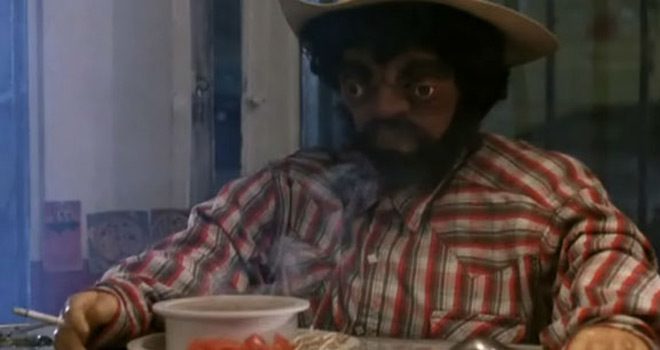 In the thirty years since Blood Diner arrived onto home video, the movie has reportedly accumulated well over eighty-thousand dollars—and possibly more. Now, after years of fans looking for original VHS copies or searching through Horror conventions for bootleg copies, Lionsgate Films finally gave Blood Diner a stand alone Blu-ray release as of September 27, 2016 as part of their new Vestron Video Collector’s Series line which includes other titles including 1986’s Chopping Mall, 1987’s The Gate, and 1989’s Warlock.

For a bloody, goofy, side-splitting good time, look no further; for Blood Diner has a menu full of those ingredients that will satisfy any fan hungry enough to digest its thirty-year-old cheese-infused delicacy. 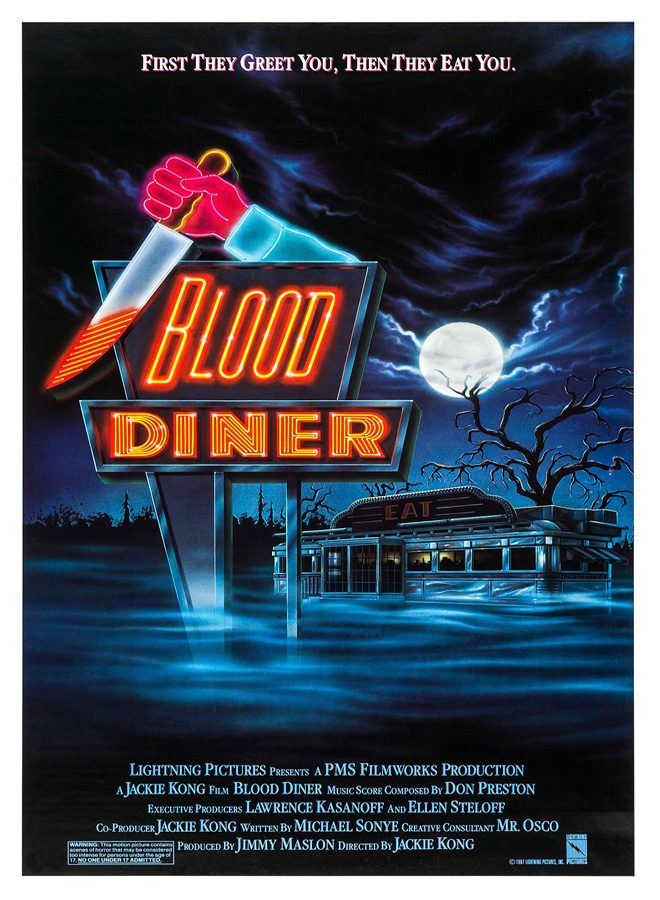