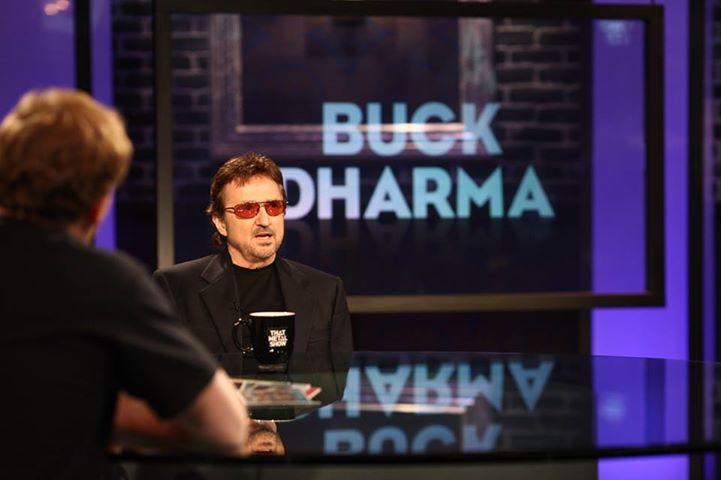 VH1 Classic’s centerpiece in original programming “That Metal Show” returns this week with the show’s Season 12 finale. The guests for this week’s episode are Blue Oyster Cult guitarist, Buck Dharma, and Kix lead vocalist Steve Whiteman and guitarist, Brian Forsythe. “That Metal Show” is hosted by radio/TV personality Eddie Trunk and comedian/TV personalities Don Jamieson and Jim Florentine. The episode features Dharma talking about various topics in the band’s history including Blue Öyster Cult co-headlining the iconic Black and Blue tour with Black Sabbath in 1980. A sneak peek of the season finale is available online and can be viewed at http://on.vh1.com/sneak1208. The musical guest this week is legendary guitarist Jake E. Lee. This week’s episode also features a “Metal Modem” segment with Joe Satriani, an “Origins” segment with host Eddie Trunk as well as the fan-favorite highlight every week, “Stump The Trunk.” The episode airs at 11:00PM EST/PST and will be available online Monday, July 22nd.

“Hope everyone enjoys the Season Finale of That Metal Show this Saturday. We had a great season that saw the show passing 100 episodes and earning rave reviews. This season was very much a re-launch of the show with many new features and a new set that many seemed to like. Our final episode for this round of shows features first time guests Buck Dharma of Blue Oyster Cult and Steve Whiteman & Brian Forsythe of Kix. Also excited to have, playing guitar, former Ozzy and Badlands guitarist Jake E Lee, a great way to wrap up Season 12,” exclaims host Eddie Trunk.

The Season 12 premiere of “That Metal Show” debuted to record numbers for 2013. The Season 12 premiere aired on Saturday June 1st and was the cable channel’s highest rated telecast of 2013 to date. The premiere welcomed former Metallica bassist Jason Newsted to the show for the first time. The episode garnered a 143% increase in viewership over the Season 11 premiere that debuted last August 2012. Also appearing on the season premiere was guest drummer Carmine Appice, a “Metal Modem” segment with Hatebreed singer Jamey Jasta and the Season 12 return of “Stump The Trunk” to name a few.

“That Metal Show” premiered on VH1 Classic in November 2008 and since then has become the only place for all things hard rock and heavy metal on cable television. The show has been visited by some of the biggest names in hard rock and heavy metal including members of Black Sabbath, Aerosmith, Metallica, Pantera, Judas Priest, Anthrax, Kiss, Iron Maiden, Pearl Jam, Queensrÿche, and Heart. Fans can also catch the complete season 11 and bonus clips at ThatMetalShow.VH1.com.

That Metal Show is a production of VH1 Classic. Lee Rolontz, Jeff Baumgardner, and Keshia Williams are Executive Producers for VH1 Classic.

VH1 Classic brings you the best metal, rock, soul and pop from the ’70s, ’80s and ’90s. The channel features the gods of rock – from Black Sabbath, Metallica and Iron Maiden to Stone Temple Pilots, Pearl Jam and Dire Straits – in marquee concerts and music specials, and of course, tons of classic music videos. Recent big events include National Metal Day (11.11.11) and Metal Evolution, an 11-part documentary series on the history of metal. Because when it comes down to it – all music should go to 11.

Creepshow (Season 2 Review)
Like the in-depth, diverse coverage of Cryptic Rock? Help us in support to keep the magazine going strong for years to come with a small donation.
Print page
0 Likes