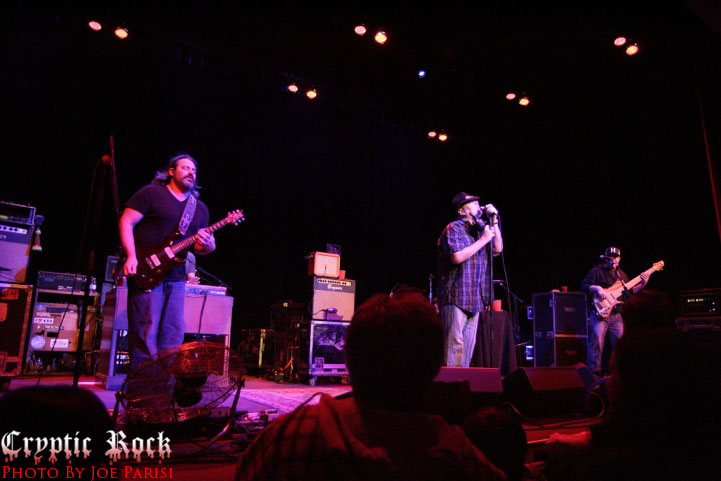 On Thanksgiving Eve, Wednesday November 27th, blues pop rock band Blues Traveler made a stop at The Space in Westbury, NY. After a two month fall tour the guys in Blues Traveler were ready to wind things down at this newly opened and beautiful venue. Having formed nearly 3 decades ago, the Princeton, NJ based band has had mainstream success in the late 90’s while remaining a consistent band throughout to their dedicated fan base. Known for their jam style band quality, Blues Traveler has weathered loss when back in 1999 original bassist “Bobby” Sheehan died tragically at the age of 31 of an apparent drug overdose. The surviving members of the band agreed Sheehan would want them to carry on making music and they are doing so well into the new millennium. A large crowd of all ages gathered for this special Thanksgiving Eve musical celebration.

Warming up the stage were New York locals Butchers Blind. Consisting of Pete Mancini (Guitar/Vocals), Paul Cianciaruso (Drums/Vocals), Brian Reilly (Bass), and Christopher Smith (Piano) this up and coming band from Bellrose, NY played a strong 45 minute set of original tunes. Their music is a straight Americana style mix of rock and country influence. Their music was thoughtful and intimate making for a great atmosphere. While a good mix of rock, the guitar work and vocals provided by Mancini really struck a chord in the audience with most very engaged in the set. The band was selling their latest album Destination Blues after their set and we recommend you give this talented bunch a listen.

After a very impressive opening act Blues Traveler were ready to take the stage. Lead by John Popper (vocals/harmonica), Chan Kinchla (guitar), Tad Kinchla (bass), Brendan Hill (drums), and Ben Wilson (keyboards) the band lit things up in grand fashion. Their set was a generous mix of new and old tracks ranging from Blues Traveler (1990) to their latest studio album Suzie Cracks the Whip (2012). Tracks like “But Anyway” and “The Mountains Win Again” sounded clear and crisp. New tracks like “All Things Are Possible” mixed well with the older tunes. The band even threw in some cool covers such as Sublime’s alternative classic “What I Got”. Popper’s voice was strong and soulful as his harmonica playing was nothing less than amazing. This guy is clearly one of the best harmonica players around and continues to prove it when you see him live. The blues, rock, and soul bled through the PA making for a heartwarming set of organic music. The rhythm section provided by Chad & Tad Kinchla was so on time and energized you couldn’t help but lose yourself in the jam. The keyboard playing of Wilson provided a great touch to each track, rounding out the already full sound. When Popper and company broke out the massive radio hit “Run Around” the crowd erupted with everyone moving on the floor. The track, now almost 20 years old, still holds up today with fans of all ages.

The band marched on with an hour plus set which the audience kept interest in throughout. Things wound down with the cool mood setting hit “Hook”. Another track which has stood the test of time and is perhaps one of the best ever recorded. Popper’s endurance to sing at such an elevated level while holding the wind capacity to storm through the harmonica is a sight to see. Full of life and tighter than ever as a band, Blues Traveler put on a great show for this crowd of adoring fans.

12►
Photo credit: Joe Parisi
Like the in-depth, diverse coverage of Cryptic Rock? Help us in support to keep the magazine going strong for years to come with a small donation.
Print page
0 Likes