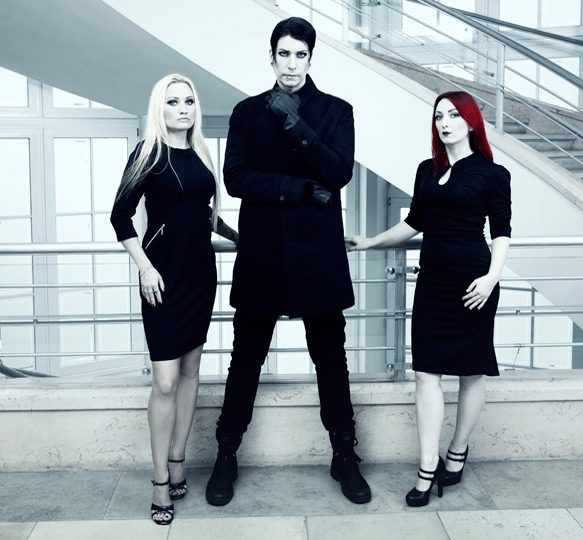 Vampires rejoice in fresh blood: BlutEngel have returned with their tenth disc, Leitbild, in-stores and available for download as of February 17th, 2017 via Out of Line Music. Just in time for that post-Valentine’s Day self-loving, as in, ahem, gifting yourself.

BlutEngel (German for “Blood Angel” and stylized as BlutEngel) are a German Darkwave group formed by Singer-Songwriter Chris Pohl. In 1998, Pohl left his earlier project, Seelenkrank, over contractual and legal issues. Requiring a new outlet for his musical passion and creativity, Pohl single-handedly birthed BlutEngel. With a blend of German and English lyrics, themes that range from the supernatural to romantic and a special kink for vampirism, BlutEngel’s music is macabre, dark, and sensual.

When BlutEngel’s debut album, Child of Glass, hit stereos in 1999, Pohl’s already established fan base was receptive to the new sound. It was followed, in 2001, by second studio release Seelenschmerz. In a bizarre twist, it was two years after that first album debuted that Pohl’s BlutEngel took to the stage to perform their first-ever live gig in June 2001 in Leipzig, in front of an astounding 10,000 fans. Word doth travel.

Going on to release five more albums through 2011’s Tränenherz, by 2012, BlutEngel was touring North America for the first time in their fourteen-year career. Tour stops included New York, San Antonio, San Francisco, and Los Angeles. As BlutEngel’s fanbase grew, the following year they would go on to release their eighth album, Monument. Going to #4 on the German charts, it would be a great achievement for the Berlin-based project.

The success of Monument was followed by 2014’s orchestral compilation, Black Symphonies (An Orchestral Journey), before Omen was released in 2015, and then, due to legal issues, re-released under the title Save Us. A year later, in 2016, BlutEngel released their best-of album, Nemesis: The Best of & Reworked. Which finally brings one to present day, album number ten, Leitbild. With an ever-changing roster of beautiful female vocalists on his albums, on Leitbild, Pohl features the exquisite vocals of Ulrike Goldmann.

According to BlutEngel’s biography, “Leitbild” means an “overall concept” or “role model.” Loosely translated, it can also mean a mission statement: Leitbild, the album, definitely makes a statement. The album is an honest, sincere, and mature foray into the world of Futurepop/Synthpop with danceable melodies and insightful social commentary. Weighing in at sixteen tracks (plus a ten-song bonus CD on the Deluxe Edition), this is enough BlutEngel to last until the sun turns black.

Leitbild begins with an over six-minute long musical introduction that sets the mood for the album; “Welcome to Your New Life” does not kick in, vocally speaking, until approximately four minutes in. Pohl’s vocals, alongside that of the exceptional Goldmann, inquire: “Do you think your soul’s eternal?” This propels listeners forward to single/video “Lebe Deinen Traum” (loosely translated to “Live Your Dream”), a clear highlight of the collection, it is catchy despite being sung entirely in German. Pohl sings on the verses, while Goldmann joins in for the choruses. Go see the intriguing visuals that accompany the song in the video on YouTube.

Other English language tracks include “Waste My Time” – a song about growing tired of the people that simply want to change you – and the rather trite “Black.” “Everything is black: black is my life, black is my soul. Black are the things that I’ve never told. Black are my thoughts, black is my heart. Black is the love that tears us apart,” sings Pohl on this song that is so ridiculously Gothic it literally bleeds more black. Oh, the pain! On a much more serious note, a socially pertinent note, “Scars” is a ballad that addresses suicide. “There are pictures in your head, there’s so many scars on your skin. Please don’t lose yourself, just keep up the fight. There are so many things worth fighting for,” promises Pohl. Considering the propensity toward depression and macabre tendencies throughout the Gothic community, songs like the anti-suicide “Scars” are a positive and uplifting jewel to discover on any disc. As Pohl emphasizes here, please remember that no one is ever alone.

“The Days of Justice” takes a slight political bent, urging listeners to fight for what is right and believe that the days of justice will arrive. Karma, anyone? While it is not as catchy of a track as many others, “Complete” is a loving tribute to a parent, friend, or lover who has guided us through life. Over-the-top “Say Something” presents a man who worships his girlfriend to such a degree as to appear as rather pathetic. Ballad “Wasting the Years” laments the loss of time to a failed relationship and contains some truly poetic lyrics, while “The Way You Feel” places its author into the shoes of their lover, trying to experience true empathy in the relationship. There is an overall phantasmagoric sound here, with great synthesizer and electronic work; think Starset or 30 Seconds To Mars if they turned to Futurepop. It is, musically and lyrically, one of the best tracks on the album.

The German language tracks tend to favor Pohl on lead vocals. They include “Unser Weg” (which loosely translates to “Our Way”); “Gott : Glaube” (“God: Faith”), a track that appears to be about one’s faith and returning to the innocence of childhood; the dancy “Alle Wunden” (“All Wounds”) with a sensual-sounding spoken word; and album closer, “Der Himmel Brennt” (“The Sky Burns”), a ballad. The clear stand-outs of the group are “Lebe Deinen Traum” and album namesake, “Leitbild.” With a good beat, excellent electronics, and harsh-sounding vocals from Pohl, but alluring softness from Goldmann, it is clear that this is a mantra for Pohl. Fans can prepare to pound their fists to the refrain: “Nein, nein, nein.”

Of course when someone truly loves a band, any extra content they can get their hands on is like Christmas morning, so Leitbild is available in four different versions, including a deluxe double-CD edition; a limited edition double LP; and a limited fan-set containing the double CD, an MCD of additional musical content, and a 2-disc tale that tells the story of Pohl and BlutEngel, in Chris’ own words. It is enough bonus content to satiate even the most die-hard of BlutEngel fans.

The bonus CD in the Deluxe Edition contains the bonus tracks “Eternal Souls,” the spiritual “I Surround You,” and “One Last Time,” where Goldmann takes over lead vocals. “I pray that the night will never come, I’m so afraid to close my eyes,” Pohl confesses in “Killing Memories (Alternative),” a track about not wanting to dream about a lost love. Also an original new track, “The Plague” expresses incredulity at how the rat race can keep running in their wheels when the world is on fire.

Re-recorded and remixed tracks on the bonus CD include “Seelenschmerz (Reworked)” off the album of the same name; a Pseudokrupp Project Dance remix of “Eternal Souls;” an Ost+Front remix of “Leitbild;” a Dance remix by Hocico of “Say Something;” and Helalyn Flowers’ reworking of “Waste My Time.” Included in the fan-set is an MCD that further includes a reworking of “Anders Sein” off the Nachtbringer EP; an alternative version of “Der Himmel Brennt” with symphony orchestration to accompany Pohl’s voice; and an excellent acoustic version of “Wasting The Years.” With twenty-six songs on its Deluxe Edition, Leitbild is a mega-bang for your buck.

Those who love the sound of English on a German tongue will love every syllable of Leitbild. For fans of bands like VNV Nation, Assemblage 23, Apoptygma Berzerk, Covenant, and their endlessly talented ilk, BlutEngel present straightforward lyrics and excellent Darkwave/Futurepop sounds that tackle a plethora of universal topics, from love and relationships to suicide and politics. Those who happen to speak fluent German, awesome; if not, thank goodness music is a universal language. For its mature subject matter set to ageless beats, CrypticRock gives BlutEngel’s Leitbild 4 out of 5 stars. 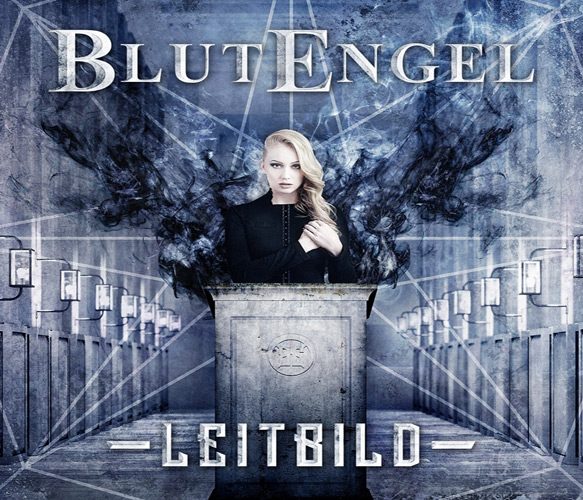