Directed by Rodney Wilson (Junkies 1999), Pretty Monkeys Media’s Bodies puts Joe Bocian (Roswell FM 2014, Longmire 2016) as Corey and Jenice Marshall (The Missing Link 2011, Red Pill Wonderland series) as Cindy to work showcasing the darker side of human nature, focusing on the exploits of two brothers who run an organ harvesting scheme that picks the wrong girl for a target… 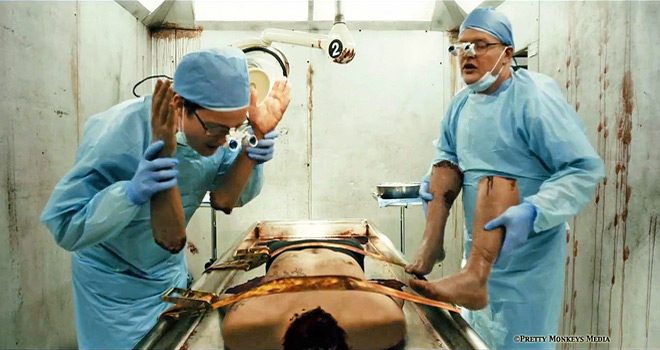 Originally titled Paramedics, Bodies hit the North American scene back in 2016, and made its way to DVD as of May 9, 2017 thanks to Girls & Corpses. Also starring Brian Landis Folkins (The Creep Behind the Camera 2014, Hoax 2017) as Jeffrey, what is Bodies all about really? Well, it is hard to call Bodies an exploitation film, because of the way that term has gotten inextricably linked with the crime cinema of the ’80s and ’90s, but make no mistake: no better term describes it. This sounds more negative than it really is – being exploitative in cinema is not necessarily a negative. If anything, the term has a somewhat positive connotation, thanks again to the films of the previously mentioned timeframes. Exploitation films have a habit of being garish only superficially, with hidden layers underneath the bombastic exterior.

Bodies certainly tries for this. If an audience is to stick with the film, it is likely they will be surprised with a few of its turns, and definitely by the work’s pace. It slows down more than an audience might at first expect, and manages to avoid being just the series of grisly murder set-pieces that it first seems to be going the direction of. It actually seems like Bodies tries for a degree of depth, but unfortunately usually comes up very, very short. 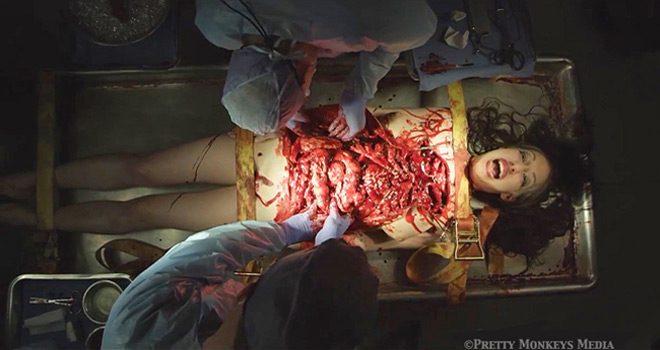 The film’s first big issue is its tone, which is reminiscent of old grindhouse flicks but desperately lacks their charm. The film can often simultaneously feel like it is barely making any effort and trying too hard. This bleeds into every element of its production, but it is most notable in its cinematography. The visuals are bland and give the quality of the production away: this is obviously an Indie-film produced on a shoestring budget, which is fine. An audience is entirely capable of recognizing that and taking that into account, lowering their expectations for what is visually capable.

A lower production budget does not however excuse a lack of creativity in the visuals; the color scheme is muted and washed out, and simple things such as the framing of shots is done in the most utilitarian manner possible. A small, intimate film like this would work far better by leaning into the idea of being visually expressive and artisan; as it is, it is simply too bland to inspire much of any feeling at all in its audience. This gives it all the downsides of a low-budget production without any of the freedom of one, leading to a film that feels entirely indistinct.

The second big issue with Bodies is the performances, obviously a natural extension of the points raised previously. The film tries at several times to be ‘more’ than what it appears to be with lengthy dialogue-laden sequences that hinge on psychological horror over any sort of physical horror, but it is undercut by actors that drag down material that needed elevating in the first place. There is some snappy dialogue in the film that would have been memorable, but it is swallowed by overly broad performances that induce more eye rolls than excited grins. To shift blame away from the actors for a second, these characters also do some incredibly stupid things that take the audience right out of the film. 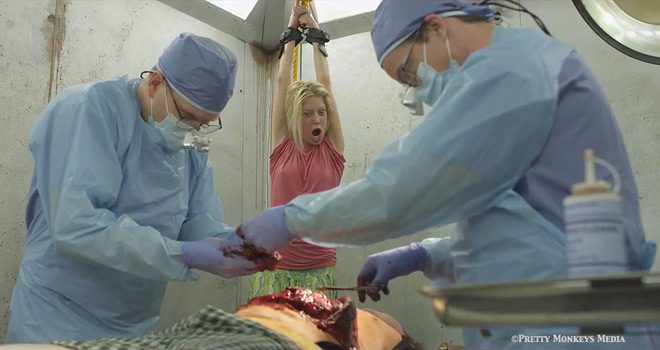 On the issue of broadness, this is an area where the Bodies’ status as an Indie gore-flick does actually help it. While the film’s expression may be uninspired and samey, the actual content does have a certain charm to it in how far it is willing to go – it may be exploitative and lack much impact because of how broadly it is played, but the film makes no attempt to hide that it is reveling in its nudity and violence. In fact, it establishes that in the very first scene, in what is probably a useful as a tease to an audience trying to figure out if this film is for them or not.

There is the sense that if the production team had just married that giddiness with a better cast and shown more creativity in the actual production, this could have been a very interesting film indeed. Instead, it is simply loaded with cliches, and cannot deliver the material it seems to inch towards. For that, CrypticRock gives Bodies 2.5 out of 5 stars. 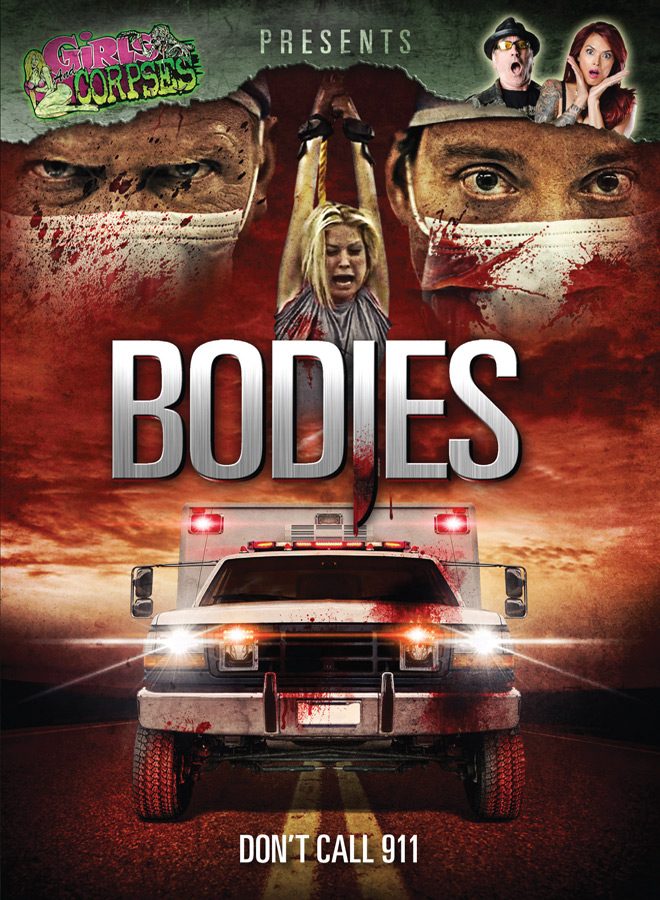