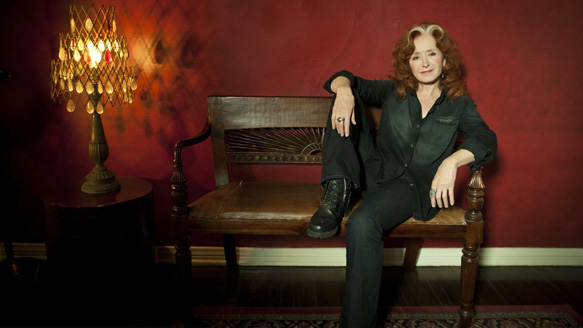 The Blues, legendary, and Bonnie Raitt are words that tie themselves together. A synonymous grouping of style and sound, Raitt has made music that is ground of what bars, chords, beer, whiskey, and slide can create. Her unique gritty voice, signature auburn with a streak of killer white lightning hair, and her soft-spoken overall demeanor has brought a respect to everything she is. Born and raised in Burbank, California, Raitt was raised in the Quaker tradition with influences in social activism. Her musical hunger began at an early age. Eventually relocating to New York as a teenager, in the late sixties while attending college in Boston, she moved toward the Cambridge Folk Blues scene. Subsequently, Raitt was bound to become both a prodigy and anomaly. Here was a young woman who was the epitome of gritty Blues, singing and playing slide guitar with authority. As a result, Raitt was born to the Blues and soon her whole life path changed when an opportunity presented itself, when she became friends with Blues promoter Dick Waterman.

In the autumn of 1971, while playing at the Gaslight Cafe in New York, a reporter from Newsweek Magazine caught her act and began to spread the word. Scouts from major record labels began to catch her performances. Raitt decided to sign with Warner Brothers records and her first album, self-titled, was highly praised. Following up in 1972 with Give It Up, Raitt’s sound proved it was time for a woman to step into the realm of Bottleneck Blues.

Through many trials, drug addiction, alcohol, label changes, albums, playing alongside legendary greats like B.B. King, and duet performances with Willie Nelson, fans have all witnessed and can testify Raitt’s strength and determination has not faltered. She loves playing her bottleneck-style on her guitar, the notable Fender Stratocaster. Now still very active, Raitt brings her latest album, as of February 26th, entitled Dig In Deep. Her twentieth overall album, it marks her first since 2012’s Slipstream, and is her second with Redwing Records. Produced by Raitt herself, her style always sets the tone of what she formulates and artistically brings to all of her pieces.

A set of twelve tracks including Raitt’s cover of two ’80s tunes- Los Lobos’ “Shakin Shakin Shakes,” and INXS’ “Need You Tonight.” Opening her heart and releasing what Raitt is known for, those moments of struggling with love, she breathes into the album opening track ”Unintended Consequence of Love.” As always, her words strike a chord as she sings, “We’ll get back to what brought us both together, baby, and find a way to resurrect our strut.” Later on, the panting efforts of “The Comin’ Round Is Going Through” gives Raitt an effortless impartation. Then there is the smooth rhythm of “If You Need Somebody” where she embraces and caresses with her cunning vocal formulation.

Continuing to offer powerful compositions from start to finish, Raitt’s salty-sweet soft side is offer on “You’ve Changed My Mind.” A tune written by her producer Joseph Lee Henry, an American singer-songwriter, guitarist, and producer, it embodies that soothing hushed part of Raitt’s vocals. Furthermore, the song pulls on the heartstrings of emotional wells as the orchestrated instruments complement Raitt’s acoustic guitar in relished ways. In between all the nooks and crannies of Dig Deep, there are plenty of other gems such as “Gypsy in Me” about life on the road, or the Joe Henry produced closer “The Ones We Couldn’t Be” with emotional piano and beautifully delivered vocals by Raitt.

Holding true to creating her own interpretations of music written mostly by other artists, Raitt owns this album. It is her voice and guitar work that leaves her unique print on each work. Raitt’s interpretations and originals have consistently stood the lyrical lines of time. Dig In Deep is the perfection of all Bonnie Lynn Raitt has set out to create a wrinkle in time upon the pages of life’s musical beats. CrypticRock gives Dig In Deep 4 out of 5 stars. 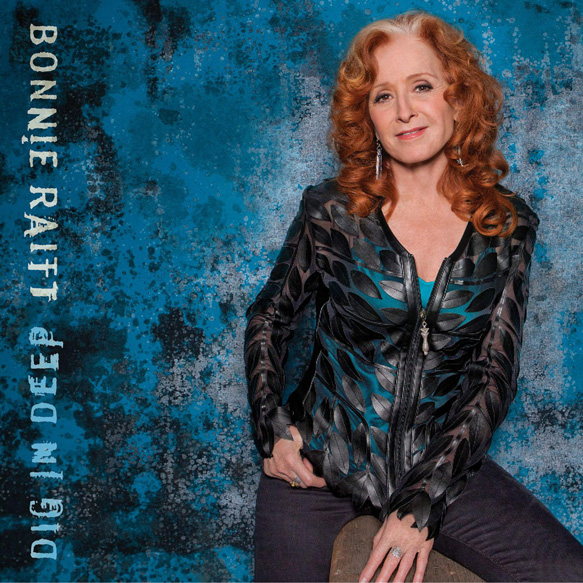