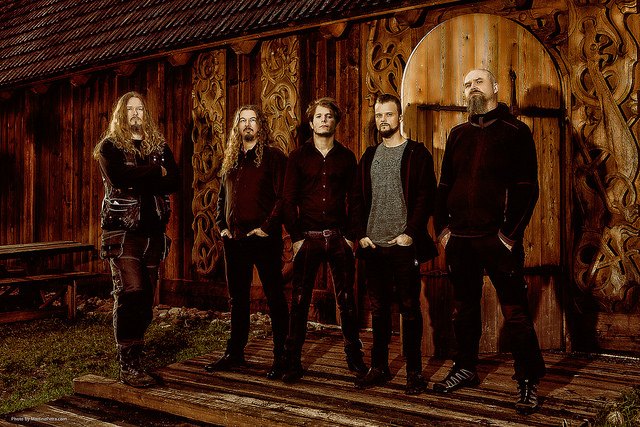 Peeking out from the aftermath of Norway’s second wave of Black Metal, Borknagar began life in Bergen, Norway, fueled by the angry spirit of the genre’s Pagan roots. This spirit, much like the snow-mantled heights of their nation’s interior, could not be tamed or held back, certainly not within the confines of any one musical style. Carried on by the restless mind of founding guitarist Øystein Brun, Borknagar wove a path out of the predictable and straight into the bracing fields of the unknown. Over nine studio albums, beginning with 1996’s eponymous debut, they earned themselves a massive worldwide following, in the process steering clear of trends while always carving their own creative path. Boasting some of Extreme Metal’s finest talents within their ranks, 2016 sees the Progressive-minded group reenlisting an old friend to help album number ten coalesce into being.

Entitled Winter Thrice, the big news out of the Borknagar camp last year was the planned inclusion of one Krysstofer Rygg, a.k.a. Garm, a.k.a. Fiery G. Maelstrom, of Ulver and Arcturus fame. Rygg had last participated on a Borknagar release in 1998 for the immortal The Olden Domain. The disjointed yet loyal wolf-pack that comprises the Norwegian Extreme Metal scene can be a gift that keeps on giving, and for Winter Thrice, one of the big highlights of the album is a whopping four contributing vocalists, each appearing liberally throughout its nine compositions. From the alto clarity of Lars Nedland, a.k.a. Lazare of the brilliant and unorthodox Solefald, to the gritty depths of Andreas Hedlund, a.k.a. Vintersorg (Cronian, Vintersorg, ex-Otyg), the album includes on again, off again vocalist extraordinaire cum bass guitarist Simon Hestnæs, a.k.a. I.C.S. Vortex (Arcturus, ICS Vortex, ex-Lamented Souls, ex-Dimmu Borgir), as well as the aforesaid return of the smooth, bar-room register of Kryss Rygg. This alone should be cause for celebration among fans of Progressive Metal, Black Metal, and everything in between. Brun, the main songwriter, is joined on guitar by long-time collaborator Jens Ryland, whose sure-fingered fret-work has bolstered Borknagar throughout the greater part of its history. Flanked by new blood in the form of Drummer Baard Kolstad, who while callow in years tends the percussion like a veteran, the album truly benefits from the horde of talented men who have come together for its making. With keyboards being handled by Lazare, a virtuoso composer in his own right, its difficult to imagine the results of their labor would be anything less than stunning.

“The Rhymes of the Mountain” kicks things off. Immediately, its epic marriage of keys, double bass, and the ever improving clean vocals of Vintersorg, pelt the listener like a snow-squall off Jotunheim’s chilly shoulders. Lazare adds his voice to the mix, before the welcome tones of Vortex soar upon these sonic winds like a hunting eagle. This ode to the glorious heights beyond Brun’s hometown of Bergen then gets another kick in the pants with some verses sung by Garm himself. As if to show fans what to expect, the song’s many parts are seamlessly blended, with harmonies and solo vocal parts sounding like they are coming from one multi-syrinx throat instead of four separate ones. Following this early triumph, the title-track (first one in Borknagar’s history) continues the upward swing of listening bliss with its solemn intonations. Brun wields his troops with the poise of a good field general, weaving the song from the cozy interior of the fireside and out into the wintry blast of coming Winter. The song encapsulates what Borknagar has always been about, and its varying moods are perfectly offset.

“Cold Runs The River” builds like the songs from the Archaic Course/Quintessence years, the keyboards harking back to the late ’90s Norwegian sound, with some good blasting and varied vocal attack highlighting a slower, yet catchy foundation. Tension is built and released with the backbeat/keyboard give and take around 1:28 in. Halstad’s drum fills are as smooth as the stones lining the ancient riverbeds of which the lyrics speak. The gorgeous “Panorama” may not have received the pre-release spotlight the first two tracks deservedly benefited from, but it could wind up being many a fan’s favorite song. In structure, as unusual as might be seen with Solefald or Arcturus, it is almost trippy in its delivery. That is, until around 2:30 in when the dynamic guitar playing builds the tension into a sublime release, which features a bit of a keyboard solo to spice things up. The Rush influence is back again, as it was in the keyboard solo from the masterful “Frostrite” off of 2012’s Urd album.

“When Chaos Calls” begins with a wonderful piano intro, before blast beats commence with fury and authority beneath Vintersorg’s clean vocal attack. The catchy, standing-on-a-mountain-peak verses interspersed between the hyper-fast sections speak of the geological edifices of wilderness from which this band gains inspiration. So at this point, the listener is five songs in and over halfway to the end. The quality of each composition is both boundless and rampant. The album flows and meanders with a feckless joy no different than the seeming chaos of a Spring morning. Life and sound in a multitude, sudden changes in the wind and weather, all seemingly in its own sync until viewed from high above. The synchronicity of the natural world, the way the seeming chaos churns the engines of life and death, has been effortlessly captured by a group of six men in a studio. Helped along by producer Jens Bogren (Amorphis, Soilwork, Symphony X, Daylight Dies), the music of Borknagar once again mirrors the machine of Nature.

“Erodent” features a nice harmony of clean vocals as well as some righteous growling by Vintersorg. The album then gets a small interlude with the uniquely titled “Noctilucent.” If Progressive Pagan Black Metal had a ballad the way Thrash Metal does, then this is it. Peaceful, engaging, it is a bit of a seventh inning stretch featuring some nice harmonizing vocals led by Vintersorg. “Terminus” re-energizes things for the final push. Again, Vintersorg sounds dominant in both the growling and clean sung registers. Catchy vocal arrangements, which proliferate all over this record, combine with an excellent piano and guitar suite 2:00 in, before Garm’s excellent voice adds to the sublimity. Be blown away by the ‘whoa-oh-ohhhh’ blast section about 3:00 in, as the song takes twists and turns like any good old mountain path. Magical and magnificent, the combination of elements on the song were arranged with such care and consideration, and yet they come out as fluid as melting ice. The digipak version of Winter Thrice features the finale of “Dominant Winds,” an introspective piece that tidies up the collection of awesomeness the listener has just experienced quite nicely.

Borknagar albums of years past have sometimes been strong throughout, while others have featured a collection of strong songs underscored by one or two absolute timeless gems, such as “Ad Noctum” off of 1998’s The Archaic Course, “Colossus” off 2000’s sterling Quintessence or the aforesaid “Frostrite” from 2012’s Urd. Winter Thrice falls under the “strong throughout” category, at a level of consistency rarely eclipsed in Borknagar’s proud history. While the music itself is spectacular, it is truly the performance turned in by all four vocalists that will catapult this album into the stratosphere. January is barely half over and already a candidate for album of the year has been born. CrypticRock gives Winter Thrice 5 out of 5 stars. 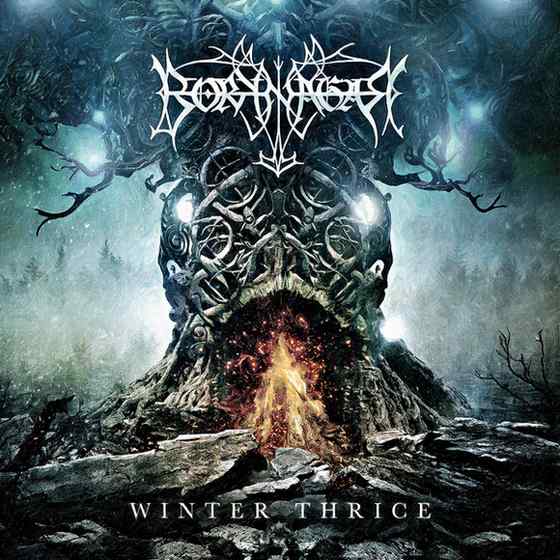