Bow Wow Wow – When the Going Gets Tough, the Tough Get Going 35 Years Later

For sure, those who have really been into the whole ’80s Post-Punk New Wave genre know the subversive beginnings of Bow Wow Wow beyond the lighthearted fun and sunny Pop styling of the English band’s international hit “I Want Candy,” which was actually their take on that 1965 song by The Strangeloves. Yes, Bow Wow Wow may have been a creation of the famous (or infamous, depending on one’s point of view) Malcolm McLaren, just like The Sex Pistols before them; but in fairness with the group, they did not really need much of the controversial manager to come up eventually with their own style of music.

Formed in 1980, in London, England, Bow Wow Wow consisted of Matthew Ashman (guitar), David Barbarossa (drums), Leigh Gorman (bass), and Annabella Lwin (lead vocals)—the three of whom were actually the backing band of Adam Ant, billed as The Ants, whom McLaren was able to convince to leave their frontman to form their own band with Lwin as the singer, his then only-thirteen-year-old Anglo-Burmese protégée. Despite having been shaped by McLaren’s whims and gimmicks, Bow Wow Wow soon developed its unique sound, that which may be best characterized as a concoction of African/Burundi Tribal rhythm and Worldbeat, the guitar-oriented and bass-driven sensibilities of late ’70s and early ’80s Post-Punk, and the commerciality of Pop music. This exotic and alluring sound could be heard in all its glory through Bow Wow Wow’s studio discography—1980’s Your Cassette Pet, 1981’s See Jungle! See Jungle! Go Join Your Gang Yeah, City All Over! Go Ape Crazy!, and 1983’s When the Going Gets Tough, the Tough Get Going, the last of which turns thirty-five this year.

Released in February 1983 by RCA Records, When the Going Gets Tough, the Tough Get Going was to be the final album of the Bow Wow Wow that was comprised by the quartet of Ashman, Barbarossa, Gorman, and Lwin. A continuation of the band’s upbeat and sunshiny fun music, it opened with their trademark train-like chugging beat of the arousing “Aphrodisiac,” whose spiraling guitar line reverberated ’60s Rockabilly sensibilities. The bright energy illuminated through the Tropical vibe of the next track, “Do You Wanna Hold Me?,” and then into the frenetic, Surf Rock–inspired “Roustabout.”

With “Lonesome Tonight,” Bow Wow Wow turned a bit sentimental, lyric-wise; yet still maintaining their Tribal rhythm section and typical choral-stylized backing vocals that added texture and attractiveness to their music. A bit slow and sinister-sounding, “Love Me” had that filmic quality that could have merited it as worthy of getting included on the soundtrack of an ’80s James Bond movie.

The fun-loving group then returned the listener to the Tropical island vibes of “What’s the Time (Hey Buddy),” conjuring sights of young peers hitting colorful piñatas and sipping glasses of piña colada. “Mario (Your Own Way to Paradise)” simply continued the rhythm and mood of the preceding track, this time with congas, bells, and rhymes. The pogoing bass then took the limelight as “Quiver (Arrows in My)” played next.

The slow Appalachian/Üliger-inspired ballad “The Man Mountain” served as an icebreaker, as it floated smoothly and gracefully, complementing Lwin’s soft serenades, momentarily replacing excitement with sentiment. “Rikki Dee” was a sped-up throwback to late ’50s Rock-n-Roll. The penultimate track, “Tommy Tucker” was inarguably the album’s most melodic excursion, owing to the less-frenzied tendencies of the guitar, singing basslines, backing vocal harmonies, and Lwin in her most melodic predisposition. Finally, Bow Wow Wow finished off their last offering with “Love, Peace, and Harmony,” ending everything with their trademark Burundi beats, Tribal chants, and scatting rhythm. Wow! Bow Wow! They should have not really disbanded, for with the sound of the fruits of their love and labor, they seemed to really enjoy making music together.

The music of the original Bow Wow Wow may have been trivialized or, worse, dismissed as novelty by many mudslinging and musically uninitiated journalists just because of the so-called Malcolm connection and the band’s international hit candy, which the same detractors used to overshadow and disregard the rest of Bow Wow Wow’s equally well-woven outputs. Because really, behind Lwin’s punky squeals, chirpy croons, childish narrations, seductive shouts, and risqué antics; and Ashman, Barbarossa, and Gorman’s Punk Rock tendencies resided a beautifully inimitable and alluringly exotic, well-crafted music.

Bow Wow Wow’s thirty-five-year-old swan album, When the Going Gets Tough, the Tough Get Going, will always be their final expression of their well-polished and well-executed brand of Worldbeat-inspired New Wave music is yet to be surpassed and eclipsed. 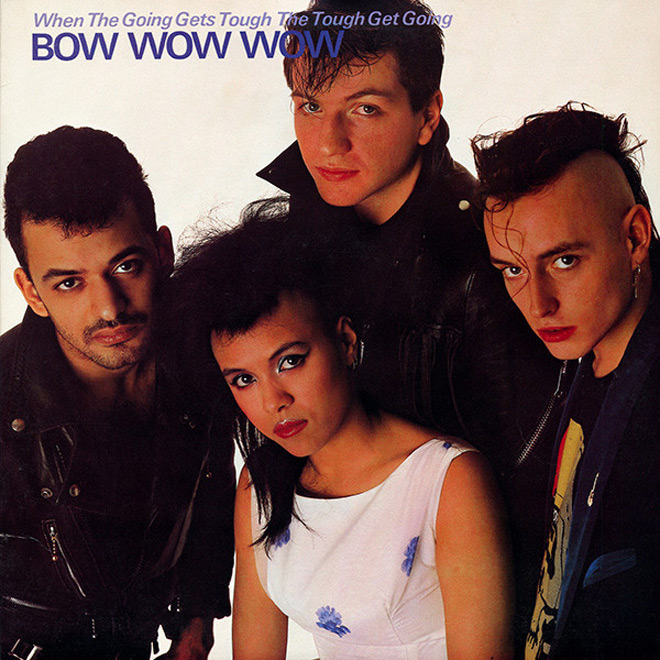