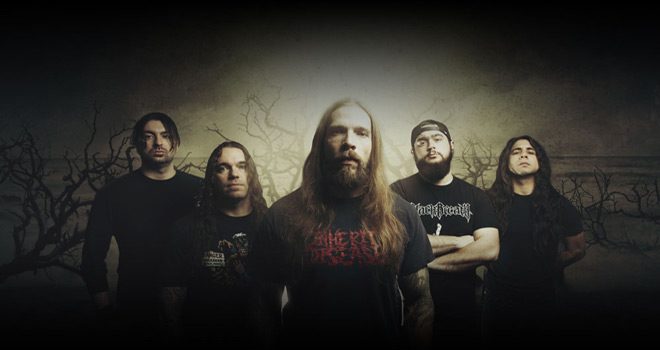 When writing an album, an artist can quickly capture their audience by introducing a fantastical side in the midst of a very real environmental subject. In Heavy Metal, the sub-genre which seems to capture this ideology best is none other than Death Metal. That in mind, an excellent example of such comes from Chicago, Illinois’ Broken Hope returning with their seventh overall studio album, Mutilated and Assimilated, on June 23, 2017 via Century Media Records.

The capture here is in the storytelling, and while parts of Mutilated and Assimilated may be pulled from Horror movie sources, the total storyline is an original thought of Guitarist and Songwriter Jeremy Wagner. Other current members include Damian Leski on vocals, Mike Miczek on drums, Matt Szlachta on lead guitar, and Diego Soria on bass. With the release of five full-length albums in the 1990s, Broken Hope was full of hope despite striking a few mishaps on the way. Then, in 2013, Omen Of Disease helped the dedicated band slowly get back on their feet. Once part of the Metal Blade Records family, Mutilated And Assimilated marks their second album with Century Media. Excited for their epic return, on June 26th, the band played a Los Angeles album release show debuting three tracks from the new album including the title-track which was written about John Carpenter’s 1982 classic The Thing, a theme which carries through some other tracks as well.

Consisting of 12 tracks, the album starts off peaceful yet strong with the instrumental track “Beneath The Antarctic Ice,” an adaptation from the idea behind John W. Campbell Jr’s short story Who Goes There. From here, Broken Hope prove they have much to offer, and “Blast Frozen,” “The Carrion Eaters,” as well as “Hell’s Handpuppets” really spin into an aggressive and hauntingly chaotic universe of mutilating riffage; chanting, wild beats; and low growls. This in mind, some of the more enticing guitar work happens in the latter track, and creates the next push from the Horror based fantasy into the vile acceptance of our horrific environmental as well as emotional problems that are the topic of discussion in the next two gems.

Moving along with fury, “Malicious Meatholes” is definitely not family dinner table background music with lyrics that depict the most undesirable traits of women who use men for sex and then demand their unworthy souls. From a woman’s perspective, one must be “man enough” to understand that this is Death Metal, it will be brutal, and it will spare no human from the punishment they deserve for their worthless vindictive actions.

The next brush of reality is found on “The Meek Shall Inherit Shit,” which basks on the pollution issues of the disintegrating environment society as a general whole. At less than two and a half minutes long, it does get its point across well, much like other bands similar to Broken Hope. In short, Broke Hope tell it as they want in the most bold and brutal way while disguising it with the hint of melodic undertones reeking into the straight death and old school ’90s Hardcore elements that remain prominent.

Then, offering ear-gasmic riffage, “Nabrok- Necropants” hits hard where all one needs to know is that “money flows like undead cum.” This is before more heavy brutality plays out on “Russian Sleep Experiment,” which is full of speedy, creeping death marches. Not to be forgotten, Broken Hope also include a bonus track, called “Swamped-In Gorehog,” which is a S.I.G. 25th anniversary tribute. Here, Leski  shows off the range of deep growls and artistic vocal sounds while there is rapid fire drumming that tells the tale that Broken Hope is back with a vengeance and not about to jump ship anytime soon.

As a whole, Mutilated And Assimilated strikes many a twisted cord with fan. Matching the theme, the album’s cover art is not only a hit over the head to the topic at hand, but is also creatively fitting to the theme with its depiction of monsters within monsters standing on a pile of skulls in a cavernous environment. In terms of Death Metal albums in 2017, Broken Hope’s Mutilated And Assimilated earns them top honors. Without further upheaval, CrypticRock gives this album 4.5 out of 5 stars. 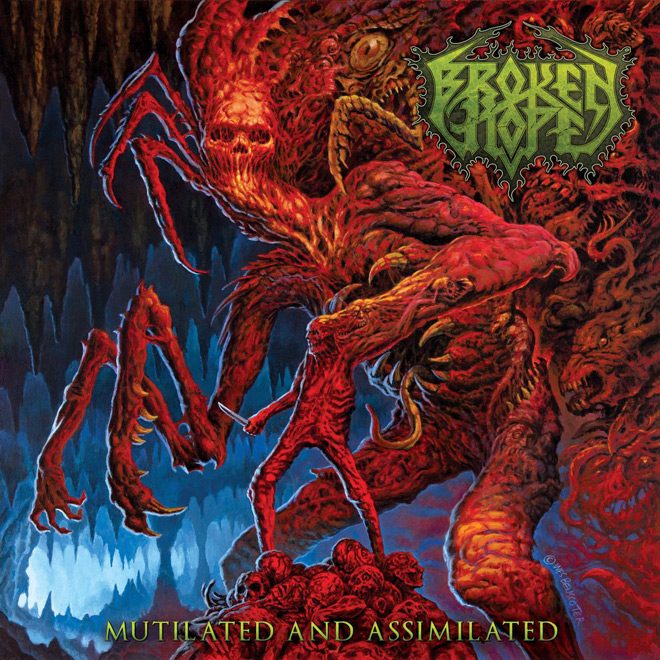