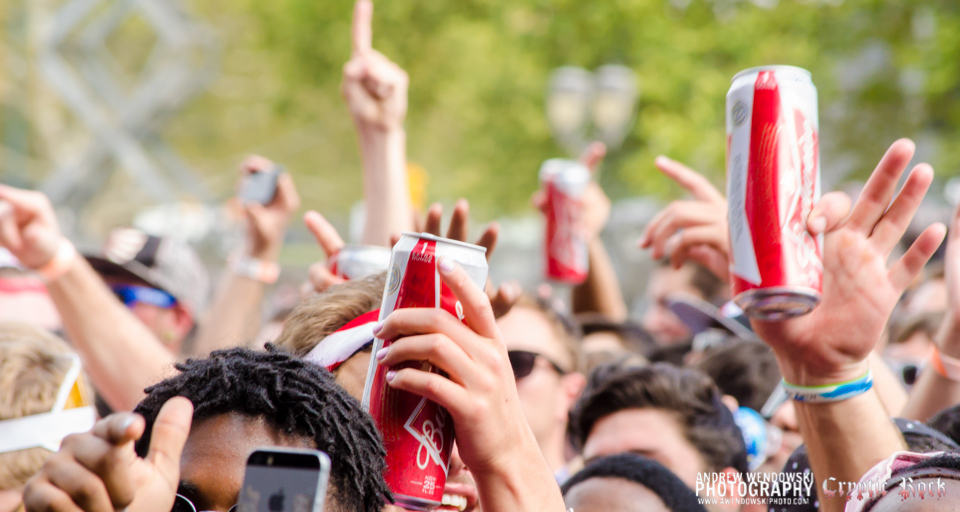 After a spectacular day one at Budweiser Made In America, the city of brotherly love started off their Sunday August 31st hot and steamy with a list of musicians ready to brightening up the overcast skies.  With a scheduled twenty six artists ready to perform including headliners Kings of Leon, Pharrell Williams, and Tiesto; it was going to be a one tremendous send off to the Labor Day weekend of 2014.

Starting off the day was Philadelphia’s own Nu-Hula band Vacationer.  Coming off the release of second studio album Relief this past June, Vacationer mix relaxing summer time beach vibes and modern pop music. They hit the Liberty Stage at 1:30 PM to delight listeners with their signature blend of sunny timbres and catchy hooks.  Lead vocalist Kenny Vasoli rocked his Phillies baseball cap as he told the audience that playing this show was an “absolute pleasure and a dream come true” before concluding their set. Vacationer’s vibe certainly fits perfectly with the summer heat and this crowd enjoyed every minute of it.

New York City based indie pop band Bleachers opened up the Rocky Stage at 2 PM.  Formed by Fun guitarist Jack Antonoff, Bleachers has been a hot project since it was introduced to the mainstream.  Kicking off with the song “Wild Heart”, the band drew a very large crowd that sang along from start to finish. During “Roller Coaster”, Antonoff switched up the words a bit; singing “Philly, you’re such a roller coaster.” The set went on with the best from their debut album Strange Desire, but the moment everyone was waiting for was clearly their closing song, and debut single “I Wanna Get Better”.  Antonoff showed enthusiasm through the performance and the band proved to have a very unique sound.  Bleachers will be returning to Philadelphia in November to play at TLA.

South Africa’s Kongos were up next on the Liberty Stage, taking the stage at 2:30 PM.  Comprised of four brothers: Daniel, Dylan, Jesse and Johnny Kongos, the band moved to Arizona early on and are currently signed to Epic Records. Rising to popularity with their debut studio album Lunatic, Kongos put on an exciting set of music with Johnny’s accordion playing striking many’s interest.  Finishing their set with the huge hit “Come With Me Now”, the audience cheered loudly in appreciation.  Kongos will be on tour through the end of September with Kings of Leon and Cage the Elephant.

Adding some Hip Hop flavor into the day was YG from Compton, CA at the Rocky Stage.  Currently signed to Def Jam Records, his debut album My Krazy Life has topped Rap and R&B charts as this young talent makes a name in the business.  Performing songs like “My Nigga” and “Who Do You Love”, YG had the crowd bopping around and into his performance.  YG is scheduled to be featured on dates of the Lil Wayne Vs Drake Tour.

The overcast skies turned into some rain as electronic rock band AWOLNATION took the Rocky Stage around 4:35 PM.  Formed and fronted by Aaron Bruno, formerly of Under the Influence of Giants, Hometown Hero, and Insurgence, the band is signed to Red Bull Records.  Riding high off the success of their 2011 debut album Megalithic Symphony, their tunes are perfect for a music festival setting.  Running through an array of songs from “Guilty Filthy Soul” to “Not Your Fault”, Bruno paused many times to interact with the crowd and offer what could only be described as motivational insights. Conveying when he wrote “Kill Your Heroes”, he had envisioned, or hoped, that one day they would play festivals with a sea of people, coming together.  Watching his dreams come true, the crowd certainly did come together especially during the hit “Sail”.  The two disc deluxe edition of Megalithic Symphony is available now.

With the evening setting in, female vocalist Grimes began at the Liberty Stage. Hailing from Vancouver, BC, Grimes mixes angelic vocals with electronic experimental sounds that can only be described as refreshing and intriguing. During the song “Oblivion”, her dancers came out looking like they were part of an 80s workout video, but that all seems to be part of the appeal of the young singer/producer. Moving on through the visual set, she boasted her love for her friend and recent collaborator Blood Orange as they performed their great new track “Go”.  Grimes put on an amazing set and fans of ambient style electronic music must check her out.

The ever popular indie rock band from Austin, TX named Spoon took to the Rocky Stage around 6:45 PM. Together for over two decades; Spoon recently released their eighth studio album They Want My Soul to critical acclaim.  Starting out with the song “Rent I Pay”, lead vocalist Britt Daniel made a comment about the beautiful weather, but then quickly changing his mind as he noticed the ominous looking clouds headed the festival’s way for what appeared to be a severe storm. It was at this time an announcement was made that attendees seek shelter until the storm passes.  About an hour later Spoon re-emerged on stage announcing the city had extended the curfew until midnight to accommodate for the festival. Singing “The Way I Get By”, Daniel seemed thrilled that the crowd stayed committed to seeing their show as the rain started up again.  The set went on into other great Spoon songs like “I Turn On My Camera” and “The Underdog”.  All in all, Spoon did a fantastic job of defying the weather and putting on a colorful set of music.

After a short break and seeking shelter from the insane weather conditions, it was finally time to see Pharrell Williams take the Rocky Stage.  The highly talented songwriter/producer Williams’ creative force combines fashion & music into one for electric performance. Treating the audience to snippets of his production hits like “Drop It Like It’s Hot”, “Hot in Herre”, and “Hollaback Girl”, he even went back to the N.E.R.D days treating fans to some of their favorites like “Rock Star” and “She Wants to Move”.  Keeping the energy level high, Williams went into newer tracks of his current album Girl such as “Marilyn Monroe”, “Hunter”, and “Come Get it Bae.”

Williams, in high spirits and being a world class performer, kept the talking brief and the music coming with Daft Punk hits “Lose Yourself to Dance” and finding room for “Get Lucky”.   He closed the show with one of his catchiest tunes, and also one of his most inescapable, asking the crowd to show everyone just how “Happy” they were.  Williams’ performance was top notch and a great way to break away the collected storm clouds above head.

As fans walked away from William’s lively performance to the Liberty Stage, they gathered to watch Dutch DJ Tiesto put on an amazing set. Tiesto has worked with huge names in the industry including superstars such as Kanye West, Coldplay, Katy Perry, and Nelly Furtado.  Keeping the beats coming with excellent mixes, Tiesto was a great way to end the weekend as everyone danced, cheering for more.  His fifth studio album A Town Called Paradise is out now.

Kings of Leon closed out Made In America festival around 11 PM at the Rocky Stage with an inspiring performance. Made In America 2014 was an exceptional Labor Day weekend celebration.  With a balanced mix of established and up-and-coming artists, there was something for everyone.  It will be exciting to see what the 2015 edition of the festival has in store.

Andrew Wendowski is a Photographer that specializes in Live Musicians. He currently shoot shows in Philadelphia, PA and New Jersey, for multiple publications.