There is a multitude of excellent Horror films from all over the planet that make long term contributions to the genre. However, occasionally a film comes along that perhaps should not see the light of day. Latest release from Finland, Bunny the Killer Thing is one such film. Released by the Black Lion Pictures, Jo-Jo the Dog Films, and Bottomland Productions, on November 6, 2015 in Finland, it is touted as a Horror Comedy. Written and directed by Joonas Makkonen (Jumalan Mies 2014, The Retake 2014) as his debut film, the movie was filmed in Puolanka, Finland and debuted at Bruce Campbell’s 2015 Horror Film Festival, and since has provoked much talk, positive and negative.

The story is set in modern day, and told by an observational point of view, kicking off with a couple arriving at a cabin in the woods, only for the man to be attacked. A group of friends including Tuomas (Hiski Hamalainen), Sara (Enni Ojutkangas: Nymphs TV series, Lordi Scare Force One video), Nina (Veera W. Vilo: Reunion 2015, Lordi Scare Force One video), and Mise (Jari Manninen: Lordi Scare Force One video, It’s A criminal World 2010) later arrive at the same cabin for a party. They wait for other friends to arrive, but during the course of the evening, they are separated. Not long after their arrival near the cabin, one by one, the group are attacked by a strange creature, known as Bunny the Killer Thing, intent on one thing, sex. Bunny the Killer Thing is a Were-Rabbit with a humongous appendage he swings around while screaming “pussy.” 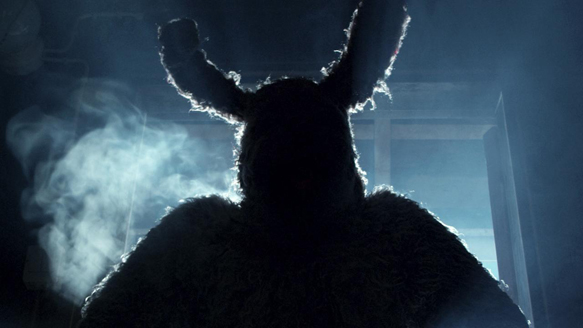 Once the audience has seen the killer bunny creature, they cannot un-see it and it will forever be burned into the brain. Only a shade away from a Porn film, Bunny the Killer Thing is at least consistent across the board at being terrible. The special effects are a kid’s Halloween costume standard, the plot is a train wreck, and the acting is equally as bad. Unless the viewer is under the influence of heavy drugs, none of the story will make sense. The ending sadly hints at a sequel, providing the viewer with a glimpse at a female Bunny the Killer Thing, and possible offspring. Full of fetish sex, misplaced gore, weird goings on, this film is not for everyone.

The cinematography by Tero Saikkonen (Kesaheina: A Day in July 2015, Rendel 2016) is the highlight of the film. Humor is subjective and while some may find this movie absurd, crude, and revolting, others may actually get what Makkonen was going for. With that said, Bunny the Killer Thing may appeal to a small percentage of viewers with a furry fetish, or those looking for a midnight movie just to laugh at, because it is funny, or just because it is hideous. All in all, that probably will strike the curiosity of many, so mission accomplished for Makkonen. CrypticRock gives Bunny the Killer Thing .5 out of 5 stars.

Purchase Bunny the Killer Thing on Blu-ray/DVD on Amazon