Even the deaf kids in Guadalajara have heard of the Bunnyman, the adorably vicious, seven-foot-tall, murderous fluffball at the center of Bunnyman Vengeance – the third and final installment in the Bunnyman trilogy – which arrived to VOD on October 20th and comes to DVD/Blu-ray on November 21st thanks to Uncork’d Entertainment and High Octane Pictures.

We open with a flash into the beginnings of the Bun, a man in camouflage tossing a Molotov cocktail into the face of a young boy before pissing on him in a futile attempt to staunch the flames. Another young boy quickly steps into the fray as a savior and a friendship is born. Fast forward to the present, burn victim turned Bunnyman (Joshua Lang: Bunnyman 2011, The Bunnyman Massacre 2014) is dragging a bag (with a small boy inside) down the highway somewhere in the Southwestern desert. An annoyed sheriff comes upon the Bun-Bun, though, before he can size up the truly asinine situation, he is run over by a second man, Jacob (Pucci Tres: Rabid Weight Loss 2014, Prism 2015).

It quickly becomes obvious that Jake is indeed the young boy that rescued our fearless bunny at a very young age. Together, the two return to the family compound – a Halloween haunted house attraction in-the-works – where they meet up with the head honcho of this rag-tag group, John (Michael Shaun Sandy: Hand of God 2015, I’d Kill for You 2017), as well as his sidekick Carl (Omari Washington: Assassin’s Game 2015, Sins of Legend mini-series). Despite their obvious loathe for both Jake and Michael (aka Bunnyman), John and Carl are placing bun-boy front-and-center at their upcoming haunted Halloween attraction. After all, what is scarier than a 7’ tall raggedy bunny man?

In the completely discombobulated lack of plot that follows, we witness John, Carl, and Michael (the Bunnyman, if you’re not paying attention) attacking a group of female campers and taking three of them hostage. Scenes of torture follow until, unwittingly, a trio of twentysomethings stumble upon the haunted house and take a stroll inside. Jack (Hunter Johnson: Improvising 2013, 2 Jennifer 2016), Lisa (Debby Gerber: Glee series, Murder Among Friends series), and Rachel (Toby Marks: Follow Me, Suck It Up 2017) quickly realize that this is going to be their final rest stop. Before she bites it, however, Lisa outwits the Bunnyman and when he passes out, there is a black n’ white acid trip of Sci-Fi pornography that occurs complete with fetish bunny masks, Industrial music (thanks to Die Krupps), and a teddy bear slaughter. 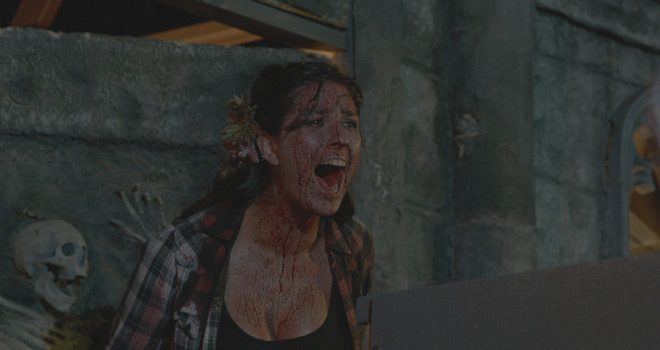 What follows involves the haunted house, the rag-tag team surrounding the Bunnyman, and a lot of blood that splatters everywhere but never once taints Michael’s white bunny costume. Bunnyman Vengeance was written and directed by Carl Lindbergh (Shadows of the Dead 2004, Bunnyman 2011), and clocks in at approximately 90 minutes. Billed as Horror but reading as Comedy, this is a film with so many things so very wrong that it is hard to figure out where to start – or how anyone could make three of these films!

Where does Bunnyman Vengeance go wrong? Eegads! Well, for starters, there is no cohesive plot here: just a Bunnyman who returns to his “family,” a trio of brothers who kill, pussycat, kill. For a film that relies on Special FX makeup and CGI effects, both are done poorly here. In one particular scene, Bunnyman disposes of a victim with a shovel to the windpipe. As the shovel is removed, the CGI effects are so obviously inserted and phony that the end result is visually preposterous! Why bother with a close-up of the carnage if you cannot effectively create something appalling and realistic? In fact, when victims are shot, the blood-spray is literally a can of paint splashed onto a wall. Speaking of that blood, why does it never seem to soak into Michael’s white Bun-Bun attire?

Other elements throughout the film that make it more comedic slapstick than anything Horror are simple mistakes of misjudgment and cheaply done production. Car scenes that involve interior shots of two actors conversing are perfect comedy: the van is clearly being rocked slowly back and forth against a black background, while Sandy (as John) does not even attempt to appear to be driving the moving vehicle. In another scene where a group of female campers are being annihilated, Bunnyman half-heartedly tosses a machete that, with little power behind it, seems to fly across fifty-feet to kill the girl with one shot. Similarly, this nighttime scene is over-lit, creating an atmosphere where in reality the killers would have been spotted immediately.

Furthermore, another key element to any successful film is good audio mixing, which, sadly, is decidedly missing herein. While many films that fail with proper audio mixing differ in volume from scene-to-scene, Bunnyman Vengeance has audio that varies within a scene; with it often being obvious that certain words and sentences were overdubbed, creating a fully inauthentic feel to conversations. In other words, people speak but their lips do not move, Godzilla! On a similar notion, any sound effects that have been added in post-production are ridiculous and inappropriate. In one scene, a girl is tossed down a well and the sound of her falling is hysterically laughable.

What is good about Bunnyman Vengeance? Well, the best acting in this abysmal production comes from Tres as Jacob, who, as a partial mute, has very few lines but is convincing in his role through body language and facial expressions; he is equal parts heart and meekness, portraying his character with a smooth finesse. Washington is also convincing in his role as the sadistic Carl. The bulk of the remainder of the cast are just chainsaw or shotgun fodder, and not much can be said for Lang (as the Bunnyman) who never speaks a word, merely wandering the landscape suited up for an Easter pageant.

If you think a 7’ tall, pilled bunny costume holding a chainsaw is horrifying, more power to you! For those of us that see through the bunny suit and into the true flaws of this disastrous flick, Bunnyman Vengeance is an abortion of a film. Sure, it might appeal to that small sect of curious folk who adore imbibing the worst that cinema has to offer, but for the rest of us, this is one film that should be avoided like a man in a raggedy bunny-suit brandishing a rusty chainsaw! For these reasons, CrypticRock give Bunnyman Vengeance 2 of 5 stars. 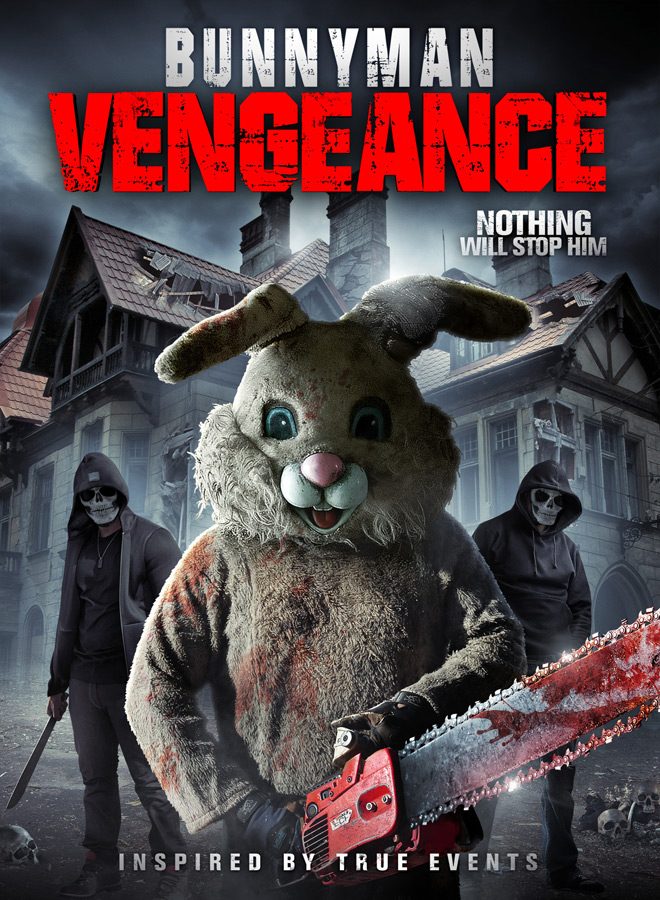