A recent buzz spreading around the web, the powerful original vocalist of Queensrÿche and currently for his own band Operation: Mindcrime, Mr. Geoff Tate is now adding acting to his resume. Somewhat old news, the reason for the current chatter is due to the DVD and VOD release of his debut film, The Burningmoore Deaths. Co-written by Jonathan Williams and J Andrew Collette with direction from Williams, it was originally released back in 2010 at American Film Market under the name The Burningmoore Incident. Featuring music from artists such as Dawn Of Solace, Craving Strange, and Tate himself, with a new title and cover art, the film now sees broad release via MVD Entertainment Group on February 6, 2017.

Filmed entirely on location, the movie starts out in Selden, New York after the murders of James Parrish’s wife and three sons, three days before Christmas in 2005. Parrish disappears after the incident and soon becomes the murder suspect. This part of the movie is narrated by Tate and has the feel of a quality news program covering the story of the brutal murders, and the mystery of why an otherwise seemingly sane man would commit such a heinous crime. 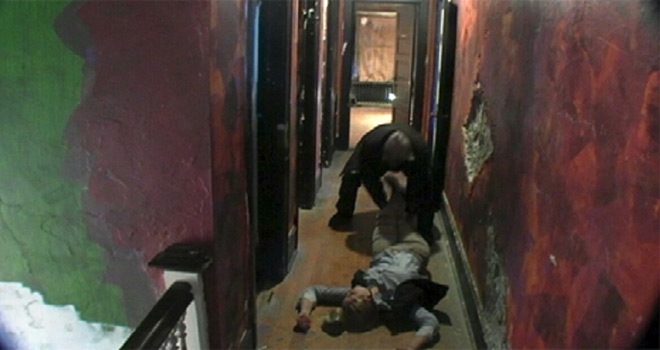 Still from The Burningmoore Deaths

From here, The Burningmoore Deaths’ look and feel takes a turn to reality-based television, with free style filming and hand held cameras. In the plot, it is now early March of 2010 on location in Bayside, Queens. A film crew for a reality show by the name of Getting Hammered has been basing themselves in a dilapidated house that will soon be renovated into a stunning bed and breakfast. Static cameras are set up in all of the rooms of the house to catch the contracting firm, Cole Contracting, whose motto is “reach your goal with Cole,” as they renovate the home.

It is here the audience meets the contracting firm, who are at often times rather funny, the film crew, and the television show’s host as they prepare and start work on the house. A homeless man approaches the crew and tries to warn them not to go in the house, repeatedly saying, “It’s his house,” but is rudely dismissed and pushed away. They should have heeded his warning. At about one-third of the way into the movie, Parrish takes his first victim. 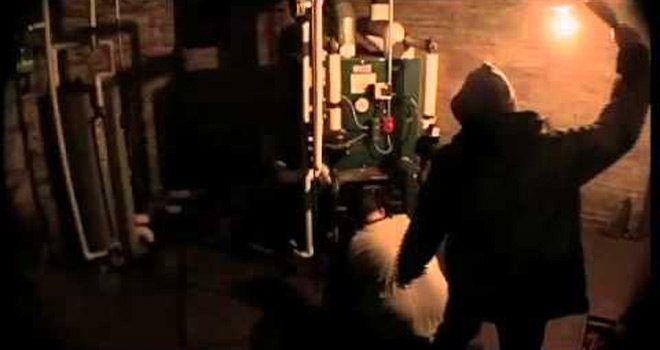 Still from The Burningmoore Deaths

As the day unfolds, one by one, Parrish extinguishes victim after victim. Unfortunately for viewers who want to see the horror unfold before their eyes, most of the killings take place out of the viewer’s sight, as the cameras in each room are static. As the film crew returned to catch footage of the day’s progression, rather than finding repairs and fresh paint on the walls, they find a bloody massacre. With the sound on a heavy heartbeat, the crew finds the bodies as Parrish takes more victims out in the process. By nightfall, the police and news crews flood the scene in this quiet Bayside neighborhood. All the while, as they search to find clues to who committed this brutal crime, Parrish cleverly eludes them, escaping right from under their noses.

Made for fans of reality documentary style filming, The Burningmoore Deaths is quite an interesting watch. With very little twists and turns and the horror of the brutal murders left more for the imagination, while the movie lacks a deep plot, it does have a very clever villain. That said, Tate does an exceptional job narrating the story, possessing a tone that is natural for acting. With this in mind, CrypticRock gives The Burningmoore Deaths 3.5 out of 5 stars. 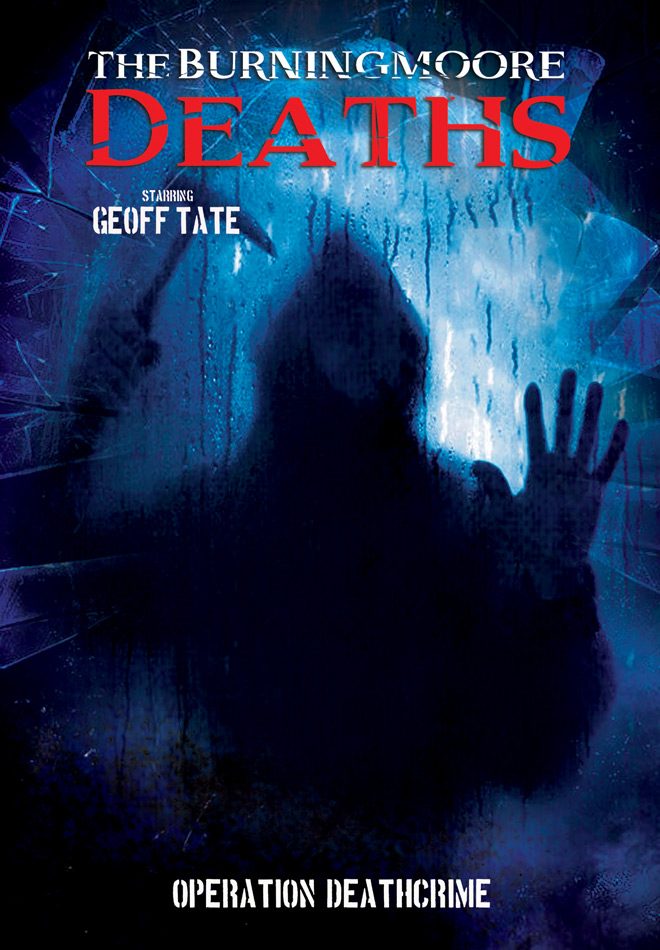