Now a days, remakes are a dime a dozen. There has been so many in the last few years, with filmmakers recreating movies that were already amazing to begin with, seemingly walking away from original material on principle. However, there are some good remakes out there that audiences love, such as The Hills Have Eyes (2006), The Fly (1986), and The Thing (2011). These films prove that remakes can shed a different light on an original story, with people even preferring the remake over the original, all the while appreciating both versions. Usually there are a few decades in between remakes, leaving audiences enough time to reminisce on the old film while embracing the new one. However, that is not always the case. 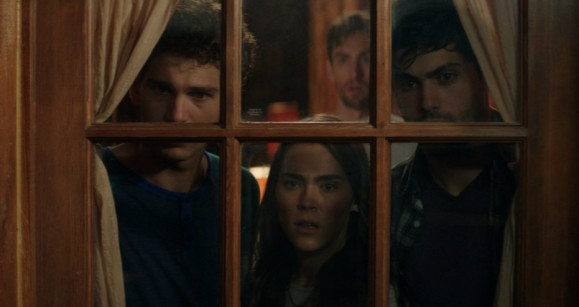 Cabin Fever the remake is, for the most part, a shot for shot copy of the original with a few minor changes. In the beginning, Henry (Schulman) is in the woods and realizes that his dog, Pancakes, has been plagued with some type of deadly, flesh-eating disease that he soon realizes is contagious to humans. Later on, a group of friends – Paul (Davis), Bert (Ingram), Jeff (Daddario), Karen (Golightly), and Marcy (Crocker)  – gather together in a secluded cabin in the woods. While some of them break in the bed as soon as they arrive, Bert goes off exploring in the woods with his shotgun. While messing around with the gun, Bert ends up shooting Henry, who has by now turned into a ravaged, bleeding monster. He runs back to the cabin and does not speak a word of what just happened. While sitting around a campfire, the friends meet a passing stranger, Grimm, who has a big bag of pot and his own dog, Dr. Mambo. Although awkward, they shoot the breeze with him until it starts to rain and he promises to come back the next day. 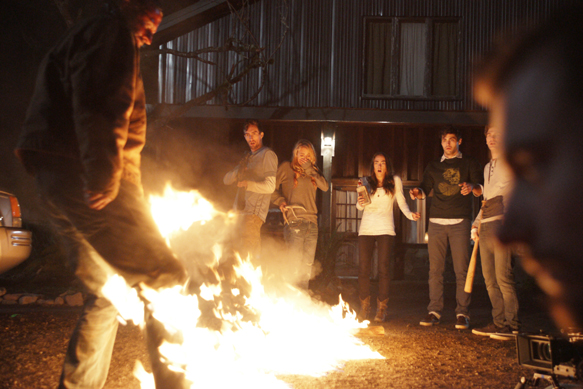 In the middle of the night, Henry shows up at the door, flesh eaten and bloody. The group freaks out when this mysterious, disgusting man will not leave and light him on fire, but not before he infects all of their surroundings, including their car, with his blood. Traumatized by this incident, the friends only want to go home, but their car is beat up from the night before. Some of the guys go into town to find help, but when they discover their closest neighbor is the cousin of Henry – the person they just killed – they bolt. When Deputy Winston (Linton) arrives, they explain to her what has happened and that they need help getting a ride home. While acting very conspicuous, she promises to call a tow truck and that it should arrive shortly. Along with this, Dr. Mambo shows up without Grimm and appears to be infected by the same disease as Henry was.

It does not take long before members of the group at the cabin become sick, starting with Karen. After discovering her sickness, they quarantine her outside in a lockable shed in the hopes that it will keep the disease from spreading to the rest of them. Unfortunately this does not work, and one by one they are each plagued with this mysterious illness. Will any of them survive?

Set to be released on February 12, 2016, Cabin Fever is the exact story of the original, but told with different actors and a more “present” plot; there is discussion of the Internet and a specific video games is brought up in the beginning. The film has the same Horror Comedy vibe and the same amount of blood and gore that fans loved from the first one.  Although surprised that this film was chosen to be remade only fourteen years after the original was released, it was fun to watch a slightly different version of the 2002 film, and it will be interesting to see what audience thinks about it. CrypticRock gives Cabin Fever 4 out of 5 stars. 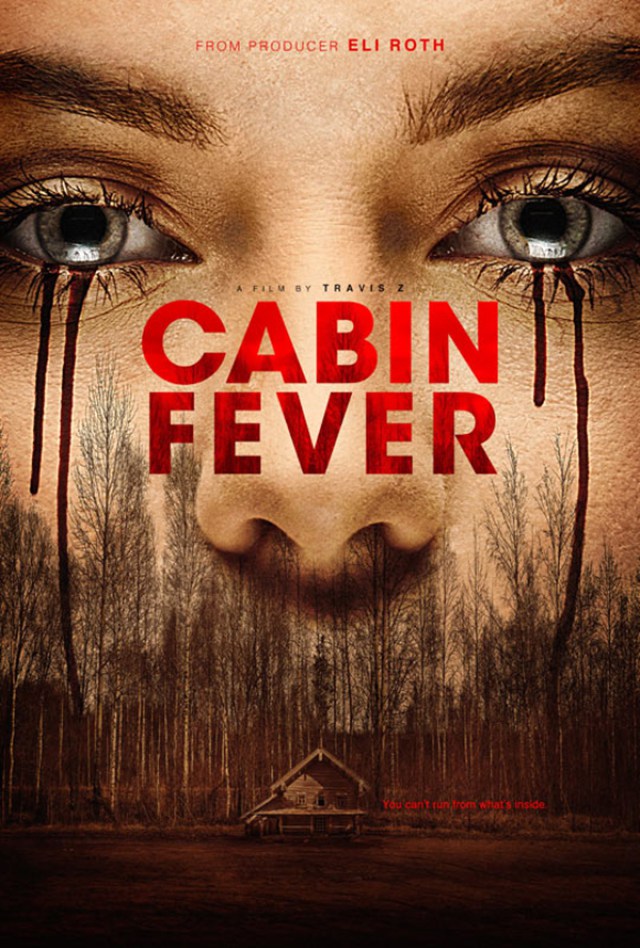