Shown at Frightfest in London and the Leeds International Film Festival earlier in 2017, Canaries is a new film many have been singing about. Writer/Producer/Director Peter Stray hopes people will find “some laughs, scares, sci-fi intrigue and some political/social subtext should (they) go looking for it,” according to an interview on Blogomatic3000. He also described it as “a fun tale to be enjoyed with a beer and some friends.” In terms of Welsh Horror Comedy, it just has to beat the 2009 James Corden vehicle Lesbian Vampire Killers to take that crown. Yet, its plot leans closer to 2013’s Pegg/Frost/Wright combo The World’s End. Interested yet? Read on! 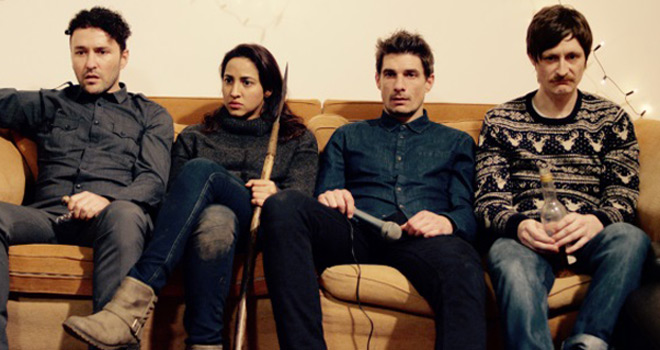 Canaries is set in Lower Cwmtwrch, Wales, where DJ Steve Dennis (Craig Russell: Magpie, 2013, Songbird 2018) returns home to set up a party for New Year’s Eve. He is hoping to get some capital from his London friends Nav (Richard Mylan: The Upside of Anger 2005, Casualty series) and Sunita (Sheena Bhattessa: Love Aaj Kal 2009, Whitechapel 2012) for his next business venture – nightclubs across the Welsh Valleys. Unfortunately, the first wave of an alien invasion gate-crashes their party. With no choice, Dennis and his friends must defend themselves against the aliens until they can find refuge elsewhere.

Despite being low budget, Canaries stretches what it has rather well. The camera quality is crisp and clear for the most part. Its cinematography and editing manage to look more professional than many of its contemporaries. They even managed to shoot abroad, with the scenes in Martha’s Vineyard looking as good as Lower Cwmtwrch. The Vietnam scene is not so pretty, but its quality is tied into the plot (i.e. it looks like an old video because it is supposed to be an old video). Other visual hiccups have less excuses, like the harsh lighting, or the choppiness during action scenes. It does not harm the film overall, but it is noticeable.

The Sci-Fi genre is infamous enough for having corny effects and dialogue no matter how much funding it gets. Thankfully, both are more down-to-earth here. Milk VFX did a good job with the brief bits of CGI on show. Otherwise, most of the effects were done practically or with makeup. It is not the film’s strongest asset, but it comes across as a fair effort. In that it may not be completely convincing, but it is not flimsy either. Viewers will not spot the zippers on the aliens’ rubber suits, so to speak…largely because they wear buttons on their raincoats instead. 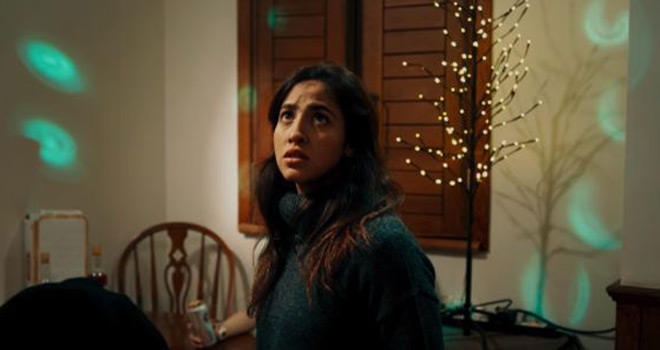 The dialogue in Canaries mixes humor and drama together, where even expository scenes have a line or two to undercut the tension. From Russell’s smug DJ Dennis trying to cover up his foibles in a David Brent-esque fashion, to American agent Kendrick (Rob Karma Robinson: Ante Mortem 2015) exchanging banter with his less-than-punctual analyst Gilman (Tsilala Brock: The Mysteries of Laura 2015, Broad City 2016). It does get some chuckles out, and it manages to make the characters funny without rendering them as complete clowns.

The cast manage to make the characters their own with their performances. Steve Meo (Grownups series, Porridge series) does a good turn as Dennis’ surly friend Huw, while Bhattessa’s Sunita stands out as the one person who gets a hold of the situation. It is hard to pick out one as the sole best as no one is really below par here. Aled Pugh (Hunky Dory 2011, Hinterland series) as the mustachioed Wing Chun expert Ryan is not a bad choice though. He is a good example of a funny character who gets serious when things go awry, and he makes a smooth transition between those two sides.

It is a different case with Canaries. The longer it goes on, the more serious it gets. There is levity, though not much in the way of jokes. It is not exactly mood whiplash. It is just different to see a film opening with a man breaking things off with a woman by using a line from 1984’s The Terminator getting so dour in its last act. A comparison could be made to 2004’s Shaun of the Dead, with its pub blockade. However, that had a lighthearted deus ex machina ending. In Canaries, things get heavy, and they stay heavy. The ending is also so-so, as it leaves things open for a sequel. It does give the audience an eyebrow-raising hook, which is an improvement over the likes of 2017’s Jailbreak. 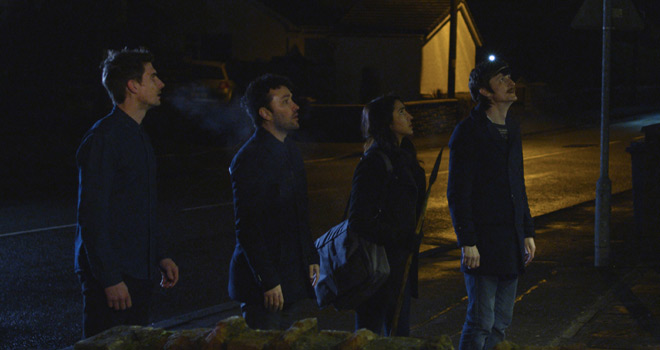 In conclusion, Canaries is an intriguing alien invasion story that makes good use of its budget. It has some good, solid performances with entertaining scenes and lines. It is easy to get to grips with, even with some of the more twisty points. The soundtrack is not too bad either, with some moody moments from Marenghast. It may get too serious for some near the end, and the ending is curious. Yet, it succeeds in being a fun tale to have a beer over. It could even be said that Canaries is something to tweet friends about. For these reasons, CrypticRock gives this film 4 out of 5 stars. 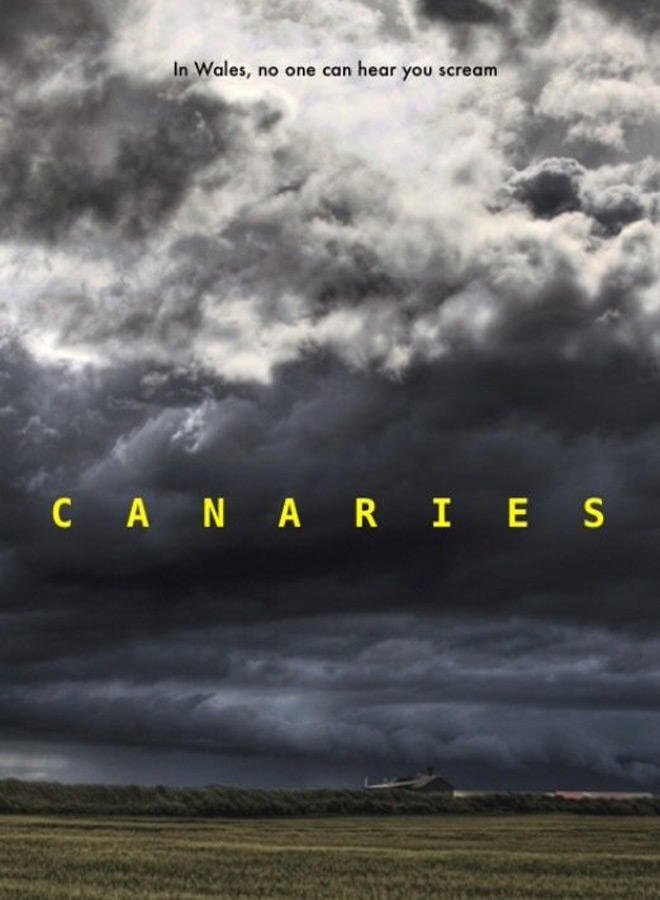